The Get Down: Stevie Wonder, Garth Brooks and More Roll Through Denver

This St. Patrick’s week is chock-full of shows in the Mile High City. From legendary crooners like Stevie Wonder and Garth Brooks to a punk-rock showdown liable to shake the brick off the walls, there’s something for everyone this week. Let 303 Magazine’s weekly installment of The Get Down help you plan your music weeks a little more wisely. We’ll help ya out!

“Everyone knows who The Dodos are,” I overheard someone say the other day. Any while that’s a bold statement, this significant indie-rock band has been around for over a decade, making deep, moving sounds that resonate with many. You can catch them tonight at the Bluebird Theater, touring for this sixth album, Individ.

The legendary Stevie Wonder will hit the stage at Pepsi Center on his “Songs in the Key of Life” performance, celebrating his most influential album. This amazing event is a one-night-only experience and is sure to have fans of this crooner weak in the knees—whether from green beer intoxication or the sweet, sweet sound of the melodies that made wonder a superstar.

These three R&B and hip-hop masters are bringing Denver The Scream Tour. This tour has dfeatured some big names before they were superstars. The likes of Chris Brown, Ciara and Trey Songz all found themselves headlining The Scream Tour before they hit it big. You wont want to miss out on this massive night of talented artists.

Featuring Poison Politix, One Time Crime, Imaginary Points, Finger Pie and Bootjax and Bonz, Larimer Lounge’s Punk Showdown is bringing the heat on St. Paddy’s Day. If you find yourself thrashed in a mosh pit beneath the soles of Converse sneakers beneath a whirl of screeching guitars and screaming vocals, you did it right. Don’t miss out! 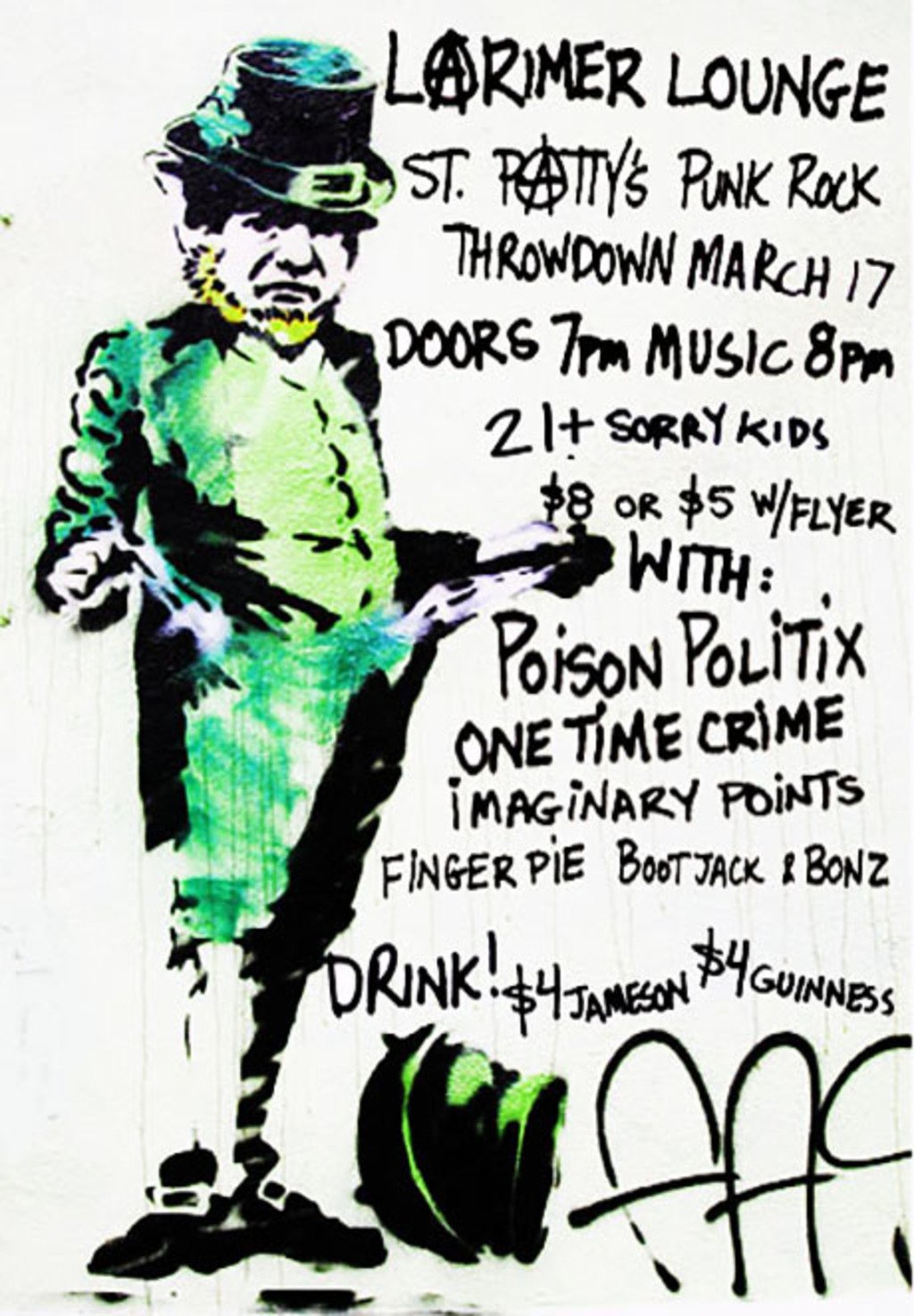 It clearly wasn’t enough for Garth Brooks to have a 2-night World Tour stop in Denver. Instead, Brooks—along with wife Trisha Yearwood—will be stopping through Denver for 6 shows. Yes, you heard that right. Country crooners Brooks and Yearwood will be gracing the Mile High City for a highly-anticipated group of performances. Country fans and music fans alike will rejoice among the sounds of good old, down home country guitar songs.

Hospital Records @ Cervante’s Other Side

This Tuesday, don’t miss a special iteration of Sub.mission presents Electronic Tuesdays featuring legendary EDM label Hospital Records. nu.tone, Metrik, and Etherwood will be playing, and the night will be hosted by Dynamite MC. Doors are at 8 P.M., and the show starts at 9. Get advance tickets for $15 or pay $20 at the door, and come out to see South London’s finest dubstep. 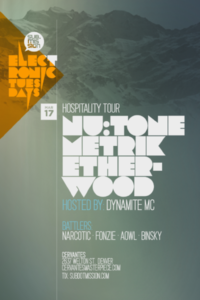 Enjoy the wide, cinematic sounds of acclaimed producer Tycho touring to celebrate the release of his second and most comprehensive LP to date titled Awake. Tycho’s airy, melodious beats are something ethereal that wake the soul and stir the senses. Tycho’s live band accompaniment makes the live performances even more strong. Don’t miss him at the Ogden Theatre with Shigeto.

There is an amazing psych show happening this Friday with local psych rockers Snake Rattle Rattle Snake headlining, and Pale Sun and Plume Varia opening up. If you like spaced out and dancy psych with heavy rhythms and lilting vocals, this is not a show to miss. Doors are at 8:30, and the show starts at 9. Ticket for this one are only ten bucks! 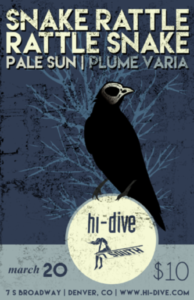 Country music fans have a lot to be excited for in Denver this week. Besides Garth, Sam Hunt will grace the Mile High with his young fresh vocals and a look that doesn’t exactly scream “country music star,” which I, for one, find to be a welcome addition to the genre. Hunt started out in the country music community writing songs for big names like Kenny Chesney and Keith Urban, but made a name for himself with his debut album. Tickets for his show at the Ogden are already sold out, but you can check Hunt out in this powerful music video for his single “Take Your Time,” where he dives into the dark subject of domestic violence. Watch it here.

Post-hardcore rockers Senses Fail will head to Summit Music Hall this Saturday. The band, who have been around for over a decade, are currently working on their sixth full-length release, slated for summer of this year. The album will be a follow up to 2013’s game-changer, Renacer, and will release under their new label Pure Noise Records. Check them out at Summit Music Hall this weekend!

R&B powerhouse, Jazmine Sullivan effortlessly blends elements of pop, jazz, soul, and more to create ballads and upbeat songs heavy on the vocals but not wary of pushing the envelop. Sullivan’s third album Reality Show, debuted #1 on Billboard’s top R&B chart. And she’s received high praise from just about everywhere—from music critics to a personal request from Sam Smith to open for his show. This songwriter and vocal superstar is truly someone you’ve got to hear to believe. Don’t miss out and watch her perform Whitney Houston’s hit “I Have Nothing” below.