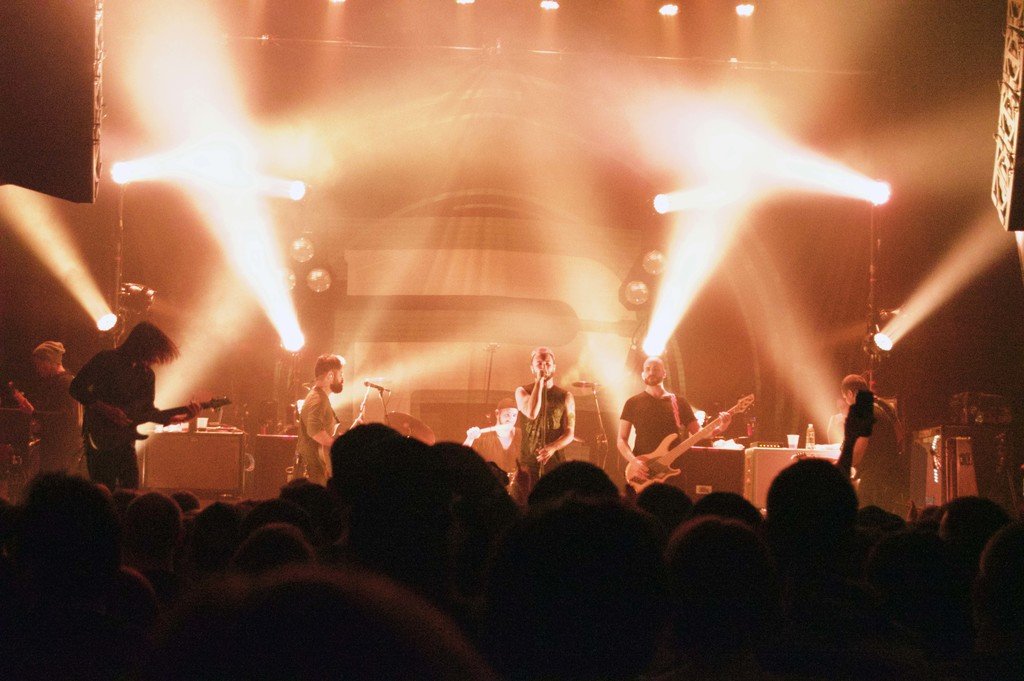 Periphery Prove They’re the “Juggernaut” of Modern Metal in Denver

An air of excitement filled Summit Music Hall on Jan. 31 when The Juggernaut Tour, featuring Thank You Scientist, Wovenwar, Nothing More and headliners Periphery, stopped in Denver on what ended up being a rather cold, snowy night and a sold out show. Periphery are hot on the release of their third album, Juggernaut, which happens to be a double album split into two parts, titled “Alpha” and “Omega.” Juggernaut: Alpha and Juggernaut: Omega debuted at number 15 and 16 respectively on the Billboard top albums chart, an impressive feat for a band that started in Periphery founder and guitarist Misha Mansoor’s bedroom. More on that later.

Thank You Scientist from New Jersey took the stage first, and their take on progressive rock spoke to the diversity of this tour’s bill. In addition to the core drum, bass and guitar players, Thank You Scientist also featured a violinist, a trumpeter and a saxophonist, who all were at the forefront of the band’s performance. They delivered an exceptional, high-energy set, made up of compositions spanning all different styles of music, including jazz, classical, rock and metal.  Also worth noting was Thank You Scientist’s vocalist Salvatore Marrano, whose style can be likened to that of Coheed and Cambia’s Claudio Sanchez. Interestingly enough, this is probably not a coincidence, seeing as how Thank You Scientist is the first band Sanchez signed when he started his new record label, Evil Ink Records, last year. Despite being the odd band out on this bill, Thank You Scientist was well-received by the crowd, and they did a great job of whetting their appetite and setting the tone for the bands to come. 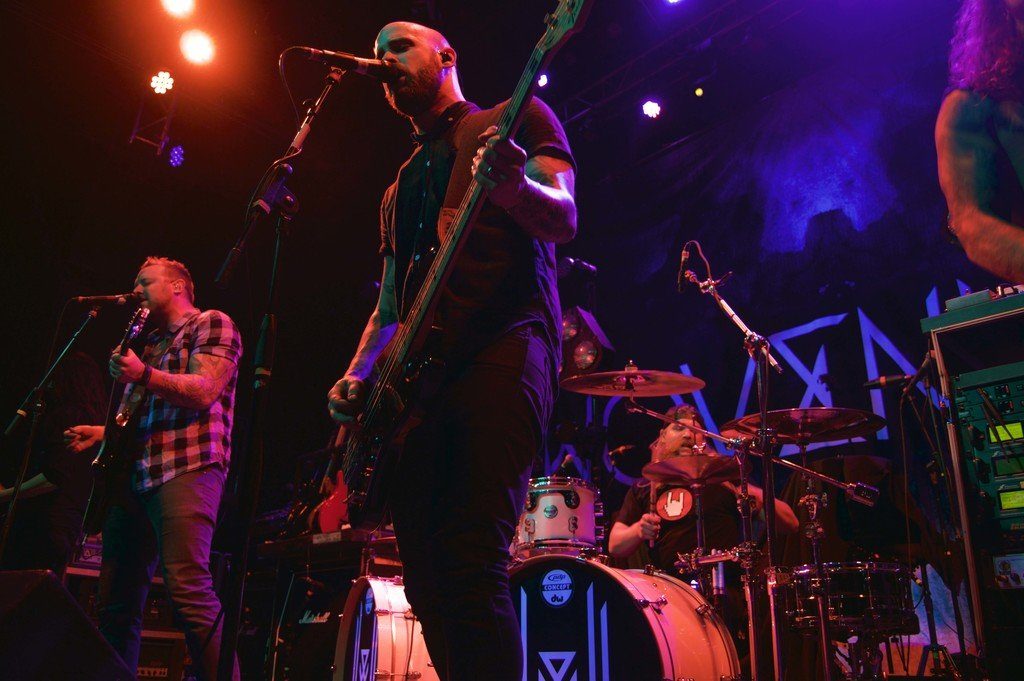 Wovenwar kept the energy level high when they hit the stage. Wovenwar is the band the ex-members of As I lay Dying formed in 2013 after Tim Lambesis was arrested for attempting to hire a hitman to kill his ex-wife (he was incarcerated last year). To say they’ve endured some trials and tribulations over the past two years is an understatement; however, they’ve appeared to rally and emerge stronger than ever as a band. Despite not being well-known by some in the audience, the members of Wovenwar are obviously longtime veterans of the metal scene, and it showed in their performance. 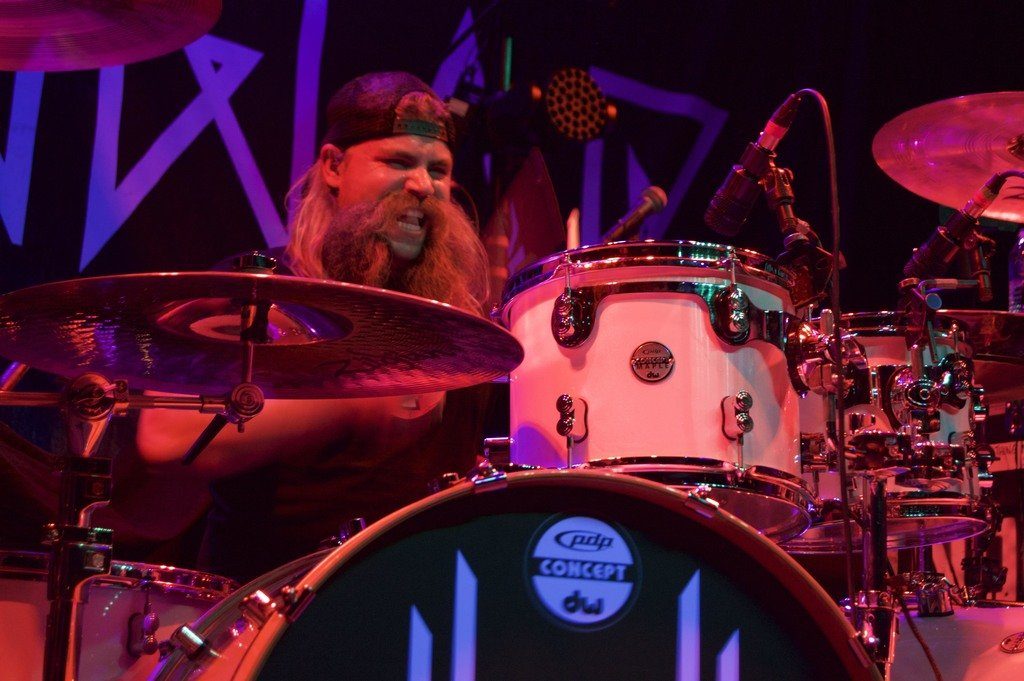 They opened with “All Rise”, the opening track off their debut self-titled record, and right out of the gates, the crowd was into it. Guitarist/vocalist Shane Blay and bassist/vocalist Josh Gilbert did a fantastic job of commanding the audience and getting everybody involved, and they gave near-flawless vocal performances to boot. Guitarists Phil Sgrosso and Nick Hipa riffed and shredded their way through the set without skipping a beat, and drummer Jordan Mancino pounded his drums into oblivion. The band was super tight live, and I’m positive they made more than a few new fans that night. 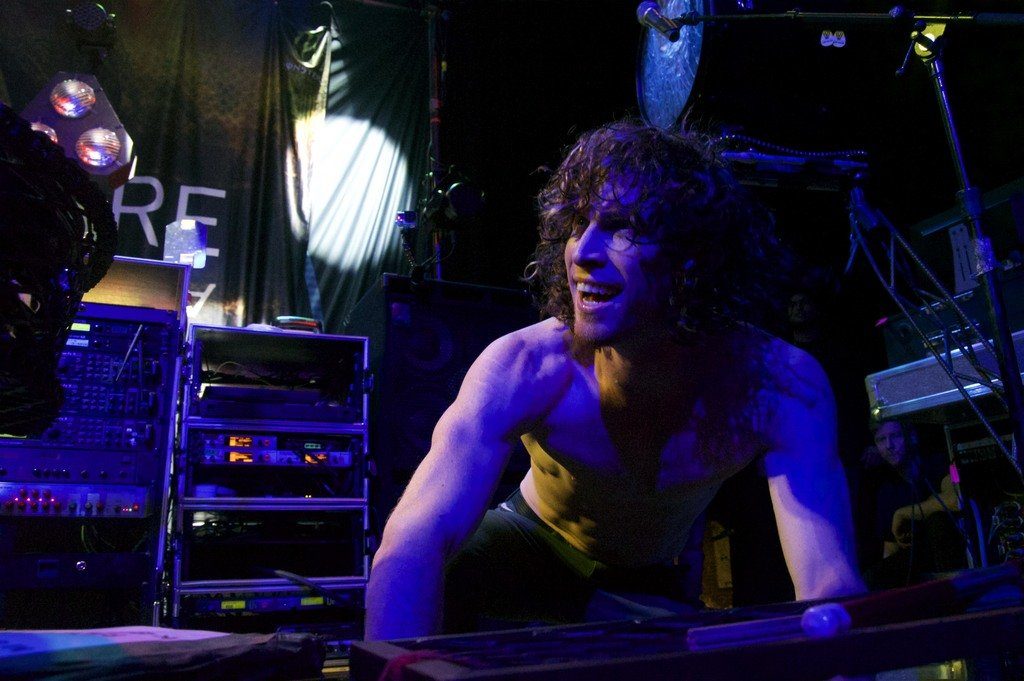 Jonny Hawkins of Nothing More – Photo by Aaron Lambert

Nothing More are poised to become hard rock’s next biggest band, with their hit “This Is the Time” recently starting to be played widespread on the airwaves, and despite their music being nothing terribly special, you can’t argue with their live show. Simply put, Nothing More killed it. It was evident from their first song that Nothing More are a band that shines live and they take the art of putting on a show very seriously, which is exactly what they did. They take it so seriously, in fact, that the members of Nothing More create their own props and percussion instruments to be used in their performance. 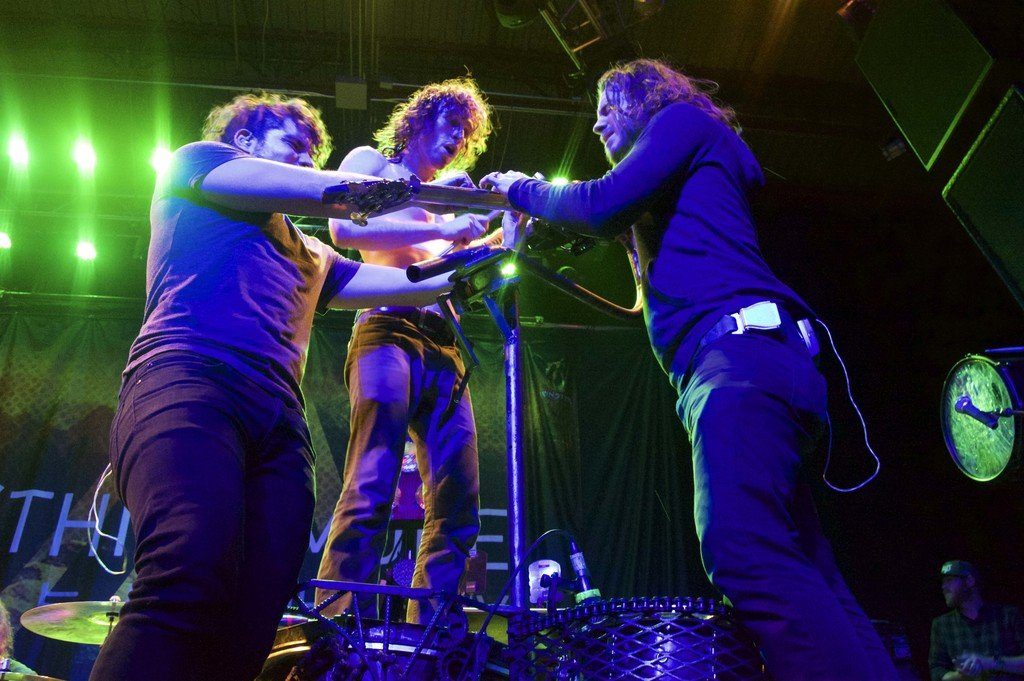 Nothing More – Photo by Aaron Lambert

Their 45-minute, percussion-heavy set included a stint where bassist Daniel Oliver attached his bass to one of the aforementioned handmade contraptions, and then him, guitarist Mark Vollelunga and vocalist Jonny Hawkins all proceeded to slap the bass like it was some sort of percussion instrument. Also, later in their set, came an epic drum battle that had to be seen to be believed. Hawkins is a very energetic frontman, and jumping fits and mosh pits broke out several times during their set, especially when they closed with the aforementioned “This Is the Time.” Overall, Nothing More put on a fantastic show, and they were likely a treat for those who were there to see Periphery. 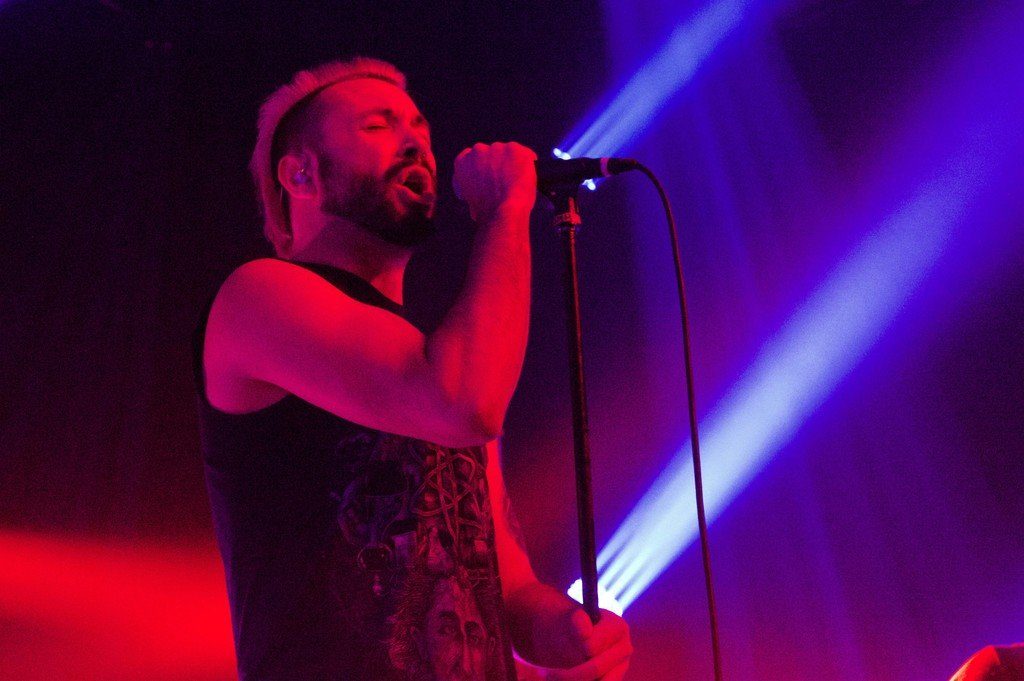 When Periphery took the stage, everybody was all jazzed up after having witnessed Nothing More, and they kept the momentum going perfectly. They opened with “Icarus Lives”, a mid-tempo, jumpy number off of their first album, and the crowd exploded once they hit those first notes. Next came “Make Total Destroy” off their second album, Periphery II: This Time It’s Personal, which really riled up the crowd. Their set consisted of mostly cuts from their just-released albums, which were very well received by everybody in attendance. However, they plowed through songs spanning all three of their albums. Despite playing a highly technical style of music, there’s enough groove and mosh-heavy parts in Periphery’s songs to lend themselves well to a live setting, and everybody in the band was super tight. Whether it was frontman Spencer Sotelo hitting those unreal high notes, guitarist Mark Holcomb’s tasteful lead playing or Matt Halpern’s insane performance behind the kit, everybody in Periphery was spot on. 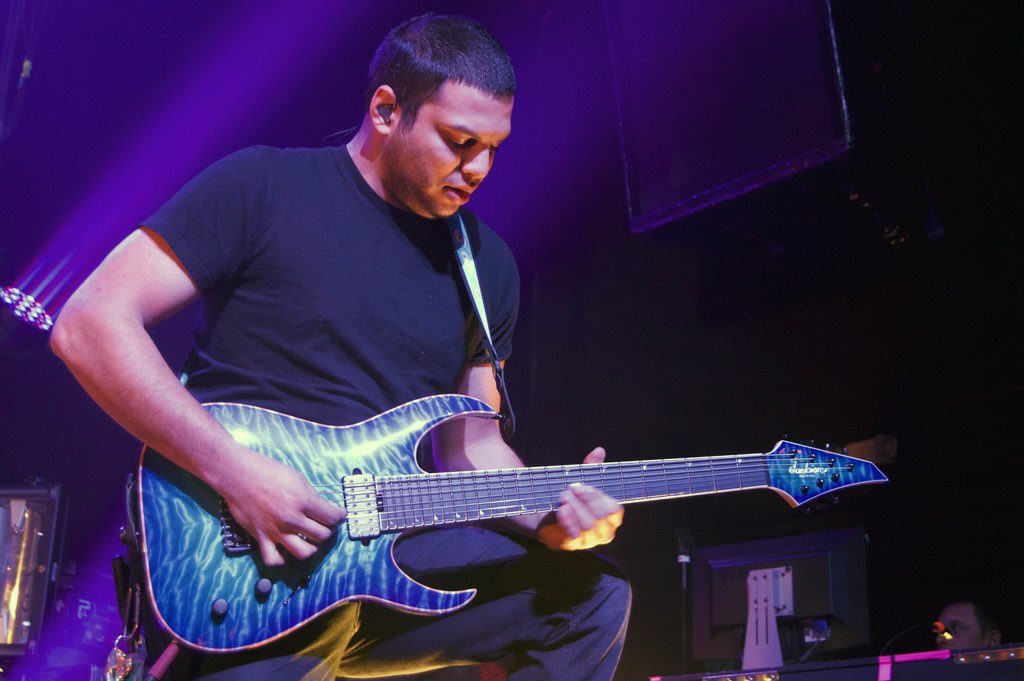 Watching Periphery play to a sold-out venue, and seeing hundreds of kids singing along to their songs, it was surreal thinking about this band’s humble beginnings. Periphery was conceived by guitarist Misha Mansoor in his bedroom, where he produced, recorded, mixed and mastered their first album. Periphery started in a bedroom. Now, just five short years later, Periphery are headlining a national tour, selling out venues and have very rapidly become metal’s next big thing. Love ’em or hate ’em, you can’t deny the sheer remarkableness of their claim to fame and what this means for metal and music in general. Even if an artist is limited to creating their art in the confines of their own bedroom, there’s no telling how big it could one day become. Periphery is living, breathing proof of this, and their performance at Summit Music Hall proved that they are, indeed, juggernauts of their craft.