I’m currently nursing a giant, yellowish bruise on my left arm up towards my shoulder. This is my prized battle wound from having survived the Colorado Fear Fest and Circus of Fear Creepy Carnival Midway haunted house experience last weekend. I hadn’t been inside a haunted house since I was just a kiddo- having tried to go to one last year and not realizing there would be hundreds of other people in line ahead of me and hastily abandoning the idea.

Here is where Colorado Fear Fest stands alone against the other Denver haunts: the concept of being entirely line-less.

Colorado Fear Fest will be running each weekend through November 1 in Olde Town Arvada, from 7-10pm (open until 11pm beginning October 17 and open until MIDNIGHT on Halloween). They will be featuring “not so scary” hours for families with youngsters from 5-7pm, beginning Saturday October 18. Tickets for the haunts are $10 per haunted house or both for $15. The “not so scary” tours are $10 and tickets for the midway games are only $1 each and can be purchased at the gate.

Colorado Fear Fest has adopted the concept that most good restaurants have started using: taking your cell number and texting you when it’s your turn. And in the meanwhile, instead of waiting in a long line (which is boring), the Circus of Fear hosts a midway tent with a sideshow stage- featuring freak shows, fire performers, and magicians- as well as a concession stand, a zombie paintball shooting range, and a variety of fun and bizarre games to keep you wildly entertained.

There are roaming performers on stilts. There are zombies in overalls who do spontaneous backflips. And there are a few rogue musicians, strumming guitars and singing whiskey ballads. Don’t forget the heckling creepster clowns that sneak up on you, barking gruffly in your ear. There is even a dizzying 3D neon maze to wander through in the midway, with a peculiar surprise at the end.

Once it’s your turn to enter the haunts, you’ll receive a text and your name will appear on a large screen by the concessions to alert you. Then you have the option of walking (or running, depending how scared you are) through two separate haunted houses: the Grisly Lodge and the Dark Mine. 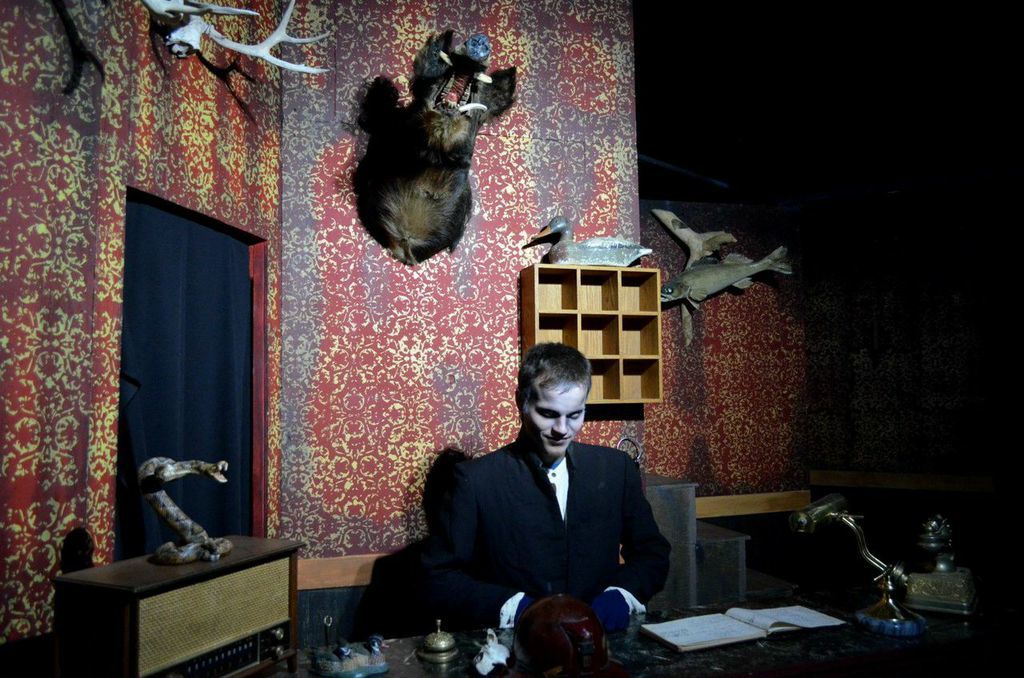 The Grisly Lodge is an outstanding and detailed hotel, complete with a bellhop, a bar and gambling hall, and lots of characters guaranteed to impose psychological terror on each guest. The Grisly Lodge is entirely interactive and you’ll find yourself conversing with the various characters (if you’re bold enough) or awkwardly squirming past them to the next scene. The Dark Mine is… well, dark. Seriously dark. This is where I acquired said bruise, when the characters literally appear out of no where and pop up inches from your face, shrieking and howling and causing you to jump and jerk out of the way- and perhaps to slam into a wall or two while you’re at it. 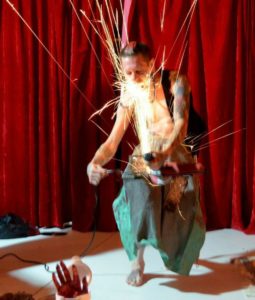 303 Magazine had the pleasure of interviewing both Ringmaster Cano, head honcho of the Circus of Fear 3D, and Tom Walchuck, the mastermind behind the Grisly Lodge and the Dark Mine haunts. Read on to get an inside perspective into what it takes to create a haunt, more details about what makes Colorado Fear Fest unique this year, and to find out what scares these guys.

303: Tell me a bit of background on your inspiration and your passion for creepy clowns.

Ringmaster Cano: I’ve always been a fan of haunted houses since I was a kid. It wasn’t until I saw the new chromadepth 3D effects did I have any interest in creating one myself. I had a ton of ideas, as well as the skill set to bring them to life. That, combined with the energy of being surrounded with amazingly creative and artistic people, drove me to see my own ideas come to life. Not to mention, it gives me the opportunity to work and play with my friends in a whole new and fun way.

303: How did you first get involved in the haunted house scene?

Tom: We started off doing a home haunt about eight years ago because we wanted to bring some of the excitement and fun back to the holiday. Compared to my childhood memories from Chicago-when whole neighborhoods would come alive with decorations and scares and trick-or-treaters- the Halloween scene around here was dead and dying. WGN’s Creature Features were also a big part of the night for us back then too.

303: What makes the Circus of Fear 3D unique and original compared to other Colorado haunts?

Ringmaster Cano: Circus of Fear 3D is unique for many reasons…

First of all, our artwork and props are completely made by our own staff of amazingly creative artists. Anything store bought is heavily modified to fit our needs. Almost all of our haunt attraction is 3D. 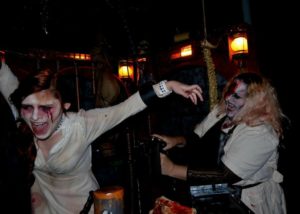 Ladies of the Grisly Lodge

The majority of our artists and actors are heavily involved in the Burning Man community. Even more amazing is what we are doing this year with our haunted carnival midway and lineless haunted houses. Circus of Fear 3D is using unique texting software to inform you when it is your time to go inside the main haunted house attractions.

In the mean time, customers get to enjoy the midway with unique Halloween themed games. Like Clown Hanging, where you toss a ball and try to hit a target. If the target is hit, a live actor standing upon a chair get’s hung with a noose. Amazingly unique and fun to play.

303: Tell me about the story lines and characters from the Grisly Lodge. There is such a wide variety of people and rooms inside, how do they all tie together?

Tom: The deathly horror of the Grisly Lodge is spurred on by the madness of its occupants. Some are ghosts that were murdered in the last incarnation of insanity unleashed by the Dark Mine, some are recent kills from the latest round of mayhem and the “survivors” are merely going mad in stages.

Each room’s occupants are in some way related to the next through blood or circumstance.

303: Tell me about the story behind the Dark Mine.

Tom: There is a resident evil that inhabits the mine, each incarnation is supposedly snuffed out in its time, only to rise again whenever some greedy bastard tries to reopen the mine in search of the alleged treasures she holds. The mine is the source of the madness in the lodge, due to its proximity and the secret shaft connecting the two properties.

303: Is the Circus of Fear truly scary? Are you (or were you) afraid of clowns? What kind of stuff do you think is scary?

Ringmaster Cano: Circus of Fear is scary, whether you are scared of clowns are not. Our staff are trained scare-ologists. I wasn’t exposed to clowns much as a kid (thankfully) but since five, I was afraid of marionette puppets without masters and having my family skinned alive. My dreams have never been very pleasant, and it’s possible that haunting is a way to release those dreams.

Tom: As a kid, what scared me the most was being outside in the dark in southern Florida. As a (native) Midwesterner, the unusual swamp noises were terrifying. As an adult, things that go bump in the night.

303: Circus of Fear joined forces with Colorado Fear Fest this year. How does that change and/or enhance the haunt, compared to years past?

Ringmaster Cano: This year Circus of Fear has teamed up with Colorado Fear Fest- making us twice as scary as we normally are, which is saying a lot. As the circus grows, we are looking at new and crazy bold ways to change the industry which we love the most.

We want to overcome what I call ‘the Achilles heel of haunting’, which is the agony of waiting in long haunt lines.

Scene from the Grisly Lodge

Instead of being treated like cattle, our customers this year get to wait their turn while checking out our unique haunted carnival of fun. Imagine killing live zombies with paint balls instead of standing in long lines…

303: What is your favorite part about the haunts?

Tom: The best part of the haunts is watching people running out of them with their friends laughing and/or screaming. Seeing people of all ages enjoying the holiday again, dressing up and letting us scare them. It takes me back to the old days with pride. This is what we hope for when we decide to do this again every year.

All Photos by Lindsey Bartlett