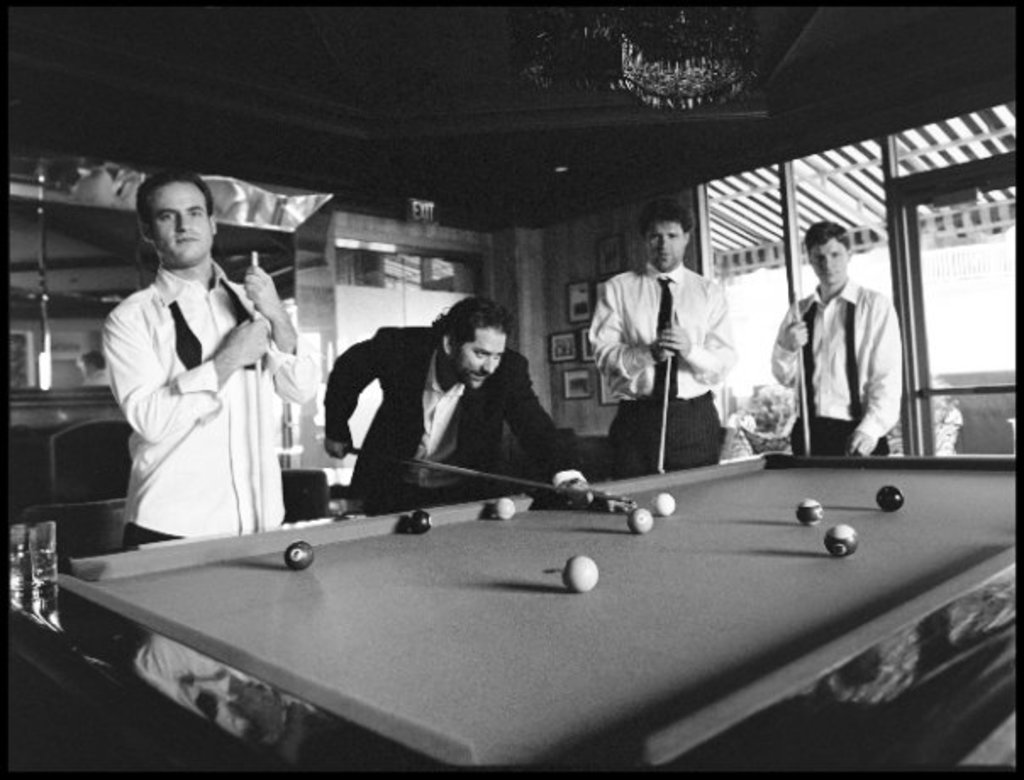 Since you are more than likely a busy professional without much time to chronicle all the music happening this week in Denver, we have done the work for you. This week’s The Get Down has everything from rock and roll to punk, EDM, hip-hop, jam and everything in between. So no matter what your favorite music style is, this week’s must-see concerts probably has something for you to enjoy. 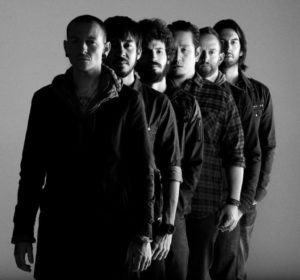 If you went to high school in America in the 2000’s then you more than likely had some serious times with Linkin Park and AFI. If you didn’t jam out to “Numb” or “Miss Murder” at some point growing up, well, then you maybe somehow avoided the awesome quasi-goth Hot Topic-obsessed stage many of the rest of us went through. This Monday we all have the chance to re-live those years with the Carnivores Tour, coming through Denver. 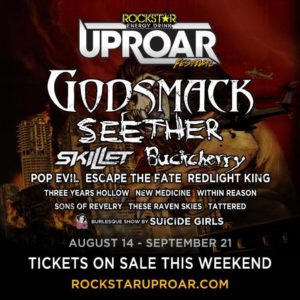 So if one major rock concert isn’t enough, you can always follow up the Carnivores tour up by attending the RockStar Energy Drink sponsored Uproar Festival. Uproar Festival has been touring every summer since 2010 with various big name hard-rock and heavy-metal acts.

This summer’s round up includes returning acts GodSmack and Seether, along with Buckcherry, Skillet and a plethora of other bands as well. See the full lineup below:

This summer we have all sorts of hip-hop mega-pairs touring. Beyoncé and Jay-Z went On the Run with their tour, Eminem and Rihanna combined their talents and then there was hip-hop’s biggest bro-mance tour, Drake Versus Lil Wayne. 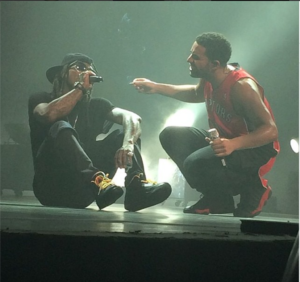 Lil Wayne, the founder of Young Money Entertainment, and his label mate, Drake, have embarked on a much hyped national tour. Weezy is now the stuff of hip-hop legend, with a career spanning well over a decade and more than fifteen albums, not even including his various mix-tapes. Drake, on the other hand, is currently on the ascent of his ever-growing meteoric stardom. His position as a super-star was cemented after releasing his 2013 critically-heralded Nothing Was the Same album. A few years ago this pairing might have been an uneven matching of a mentor and his protégé, but now they are more like evenly-keeled collaborators.

The show is supposedly set up like a rap-battle, hence the use of versus in the tour name rather than a simple and. Apparently the audience gets to choose a “winner” between the two at the end of the night via the show’s smart-phone app. With the sheer amount of hits and gargantuan stage presence between these two performers, the night will surely be one to remember.

South Broadway’s Hi-Dive is a venue well known for attracting up and coming acts before they blossom into big fame, as well as being a huge supporting venue for local music. This week they are kicking it up a few notches by hosting their very own Garage + Punk Fest, with many of the best local acts coming out to perform for the two-day event. If you’re less into the big stages and arenas and more about discovering local gems, then this event is about your speed.

Flux Pavilion is the producer of the classic (can you call them classic yet?) dubstep tunes “I Can’t Stop” and also his remix of DJ Fresh’s “Gold Dust”. Those two songs arguably helped usher the EDM wave into its current mainstream standing.

Flux is returning to the Red Rocks stage this Friday with his own mini-festival to satisfy the bass needs of the Mile High community. He comes paired with a slew of openers, including Fox Stevenson, OOKAY, Paper Diamond and the infamous rapper Juicy J. Considering that this is a Friday night show with hip-hop plus the whole range of EDM sub-genres, there is no doubt it will be a party.

Following a packed month that includes Phish’s legendary three-nights at Dick’s Sporting Goods as well as STS9’s Red Rock’s weekend, jam fans can continue their September streak with a whole weekend of the Disco Biscuits at the Ogden Theater.

Unfortunately, The Disco Biscuits Colorado-run has faced some disappointment, as their “Plan A” for the show was to initially set up an outdoor concert at Sculpture Park, called Bisco on the Green. When that location permit failed to be approved, they tried to have the event at Ruby Hill. That permit also fell through, and The Disco Biscuits had to resort to hosting their run at the Ogden Theater instead. But regardless of the location, true Bisco fans will be able to share in an epic three night run with the Philadephia-based group.

This music festival brings up-and-comers from all over the country. GOLDRUSH prides itself on championing experimentalism within art, music and film. Artists like RUMTUM, Mount Eerie, Guerilla Toss, Horse Latitudes, Wolf Eyes and more will come together to bring a progressive music festival to the RiNo neighborhood of Denver. Tickets are $25 for a two-day pass and $13 for a daily ticket. You can grab yours here. http://goldrushmusicfest.brownpapertickets.com/

Support your local music scene as well as some promising emerging talent from all over the US. You won’t be disappointed. 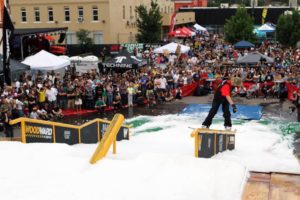 Photo Courtesy of Snowboard on the Block’s Facebook Page

As residents of Denver, we are constantly reminded how lucky we are to live in an amazing city that attracts great cultural events, such as this Saturday’s Snowboard on the Block Festival. The all-ages festival will be spread across two blocks in the closed streets of Downtown Denver, Colorado at the intersection of 35th Street and Walnut Street and will pretty much run all day, with doors opening at 10:30 a.m. and ending around 9 p.m.

It will host tons of snowboard film premiers, a pro rail jam, and plenty of professionals snowboarders out and about on the streets on Denver. But a huge draw to the festival is actually the metric ton of music, local and national, on the three massive stages that they have brought in. Headliners include The Misfits and Mobb Deep, with a full lineup is listed below.

Alright Colorado, get out there and enjoy yourself during these last few weeks of warm weather!