The musical storm that is the 2014 Underground Music Showcase is finally over, and we all survived (barely). Aside from the venues getting a little cramped and sweaty, some super long lines and a few misprints on the schedule, everything seemed to go down smoothly. No brawls were witnessed, no on-stage band break-ups occurred, and from an audience perspective, it seemed like everyone was pretty happy.

Unfortunately, it is impossible to cover the entire UMS scene. It would take at least three writers, dispatched strategically in the morning, afternoon and late night to even begin to fully review the expansive breadth of the UMS performances, day parties and panels. But, we can at least offer up highlights from our own UMS experience, with our personal favorite sets of the UMS 2014.

Champagne Charlie sounds unlike anything else in the Denver music scene. Their singer Ryan King’s gravelly voice could basically be lovechild of Tom Waits and Eugene Hutz of Gogol Bordello. Their gritty underworld sound bares the teeth of a punk group, but contains the more digestible melodies of folk-rock.

Their set an excellent first exposure to the one of a kind local sound that was to come of the weekend. The boys of Champagne Charlie then went on to perform a killer busking set by taking their acoustics to the streets on Friday night. They drew in a crowd at the corner of Broadway and Ellsworth that was almost as fat as their official performance the night before.

Calder’s Revolvers never fails to execute a tight and invigorating set. The group is power-funk but errs on the side of classic rock and roll tradition. They’ve been a staple on the Denver music scene for a hot minute, so it was no surprise that their UMS set exemplified that. 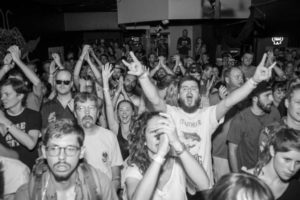 Despite the Skylark being packed full, lead singer Andy Schneider managed to belt it out loud over the din of bar conversation. Their music made the mood of the whole bar jovial and warm. But it was when they decided to play a cover of R.Kelly’s Ignition Remix, that really cemented the set as a crowd favorite.

See photos from day one of UMS at 303’s UMS photo gallery.

The line was long outside the door of Three King’s Tavern early on Friday night. People were talking about the band of young teenagers who impressed everyone the year before at UMS. Well, Residual Kid went and did it again in 2014.

By no means is this your high school’s Battle of the Bands kind of garage group. Residual Kid’s talent is complex and undeniable, especially for their age. Grown men and women were moshing like crazy to these kid’s grunge punk. They ended their Three King’s set by covering a song by their role model, Nirvana. They also played the main stage on Sunday at 4 p.m. These three teenagers from Austin, Texas are pretty much cooler than any of us were at their age. Actually they are probably cooler than any of us are now. 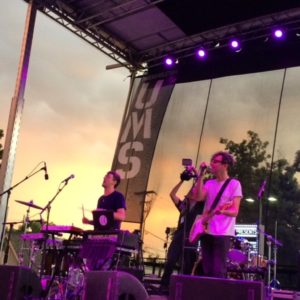 Tanlines proved to be a surprising performance for many not expecting their dancey synth-driven tracks in a festival typically dominated by rock music. The duo coupled on-point vocals with guitar, drums, synths and tropical tones to create something that had audience members dancing from the front to the back of the main stage parking lot. Whether you’ve heard their music or not, chances are “All of Me” was in your head for the next 24 hours.

It was a hard choice… People Under the Stairs or the Other Black, playing at the same time. Of course, at UMS, had to check out the local act.

There are a lot of members of Other Black. Some come and go, others are more constant but essentially Other Black is the baby of Cosmic Slim (Wesley Watkins), a former member of Air Dubai and Petals of Spain. Slim writes and arranges all of the music, but Other Black would not be nearly as rich without the dynamic sound that comes from the other talented musicians sharing his stage.

At Illegal Pete’s they came armed with Slim, three backup singers, one rapper, keyboards, bass, drums, alternate percussion, saxophone, and guitar. The audience was so filled at Pete’s that if you went there just to get a burrito, you were kind of out of luck. The most engaging song of the set was the Parliament Funk-esque tune called “Ain’t Got”.

This was another group mentioned in our “UMS Acts Not to Miss” articles, and again, these guys did not disappoint. The vocals mirrored their melodious recordings and the guitar sounds were only amplified to intensity during the live show. The band showed graciousness, poise and endless energy during their set. They even gave away free singles of their hit “Kisser” after the show. Another awesome Friday night set. 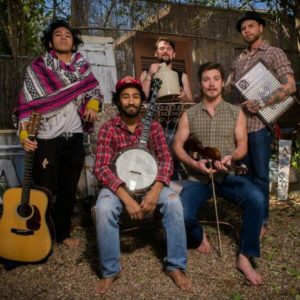 Whiskey Shivers exploded all over the Skylark. These handsome kids came straight out of Texas with their strings instruments and washboard percussion to bring Denver their own style of bluegrass. It had all of the roots bluegrass tradition but a young, punk delivery.

At one point their washboard player had the whole bar participating in a Southern call and response song that finished with “Amen”, “Hallelujah” and “Hail Satan”. Their tied up their set by coming down from the stage (to allow the next band sufficient time set up, such gentlemen) and playing an old folk tune that had everyone howling along. Despite playing as long as possible, the crowd still chanted – ‘One more’. They definitely gained a few new fans with that performance.

Thanks to The Underground Music Showcase, Schomp Mini, the artists and bands and everyone else who contributed to making UMS 2014 such a good time. Until next year!