Lindsay Luv is internationally acclaimed and has entertained for the likes of Kanye West, Hugh Hefner and Motley Crue. Celebrity DJ Lindsay Luv, known as the official COACHELLA Guess pool party DJ, has also been labeled a “Turntable Goddess” by VICTORIA’s SECRET and the “DJ to the Stars” by MTV. 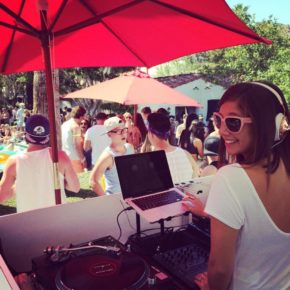 In addition to being able to rock the turntables at any event and set the mood for the party, she also has her own fashion line, she blogs, produces and regularly tours the world. 303 was lucky enough to first work with her at Denver Fashion Weekend last winter, and now she’s back to enjoy some Denver summer sun and entertain and the pool party.

This special second installment of the Summer Pool Party Series will take place on the July 13th at The Breaker’s Resort. Not only will their be a pool, poolside entertainment by the likes of Lindsay Luv, cocktails and BBQ, a portion of all sales will go to support Elevation Blueprint.

Grab your TICKETS or book your CABANA today before they sell out!