Global Dance Festival has once again returned to Colorado for another beautiful summer weekend at Red Rocks. Global has a reputation for putting on some of the best electronic music festivals and shows in the country, and this year should be no exception. With over a decade of experience under their belts, Global and AEG Live have pulled out all the stops to make this year’s Global the best yet. This 12th annual Global Dance Festival has attracted an absolutely immense lineup of EDM powerhouses, including Adventure Club, Destroid, Zedd, Wolfgang Gartner, Showtek, Waka Flocka Flame, Infected Mushroom and many more. 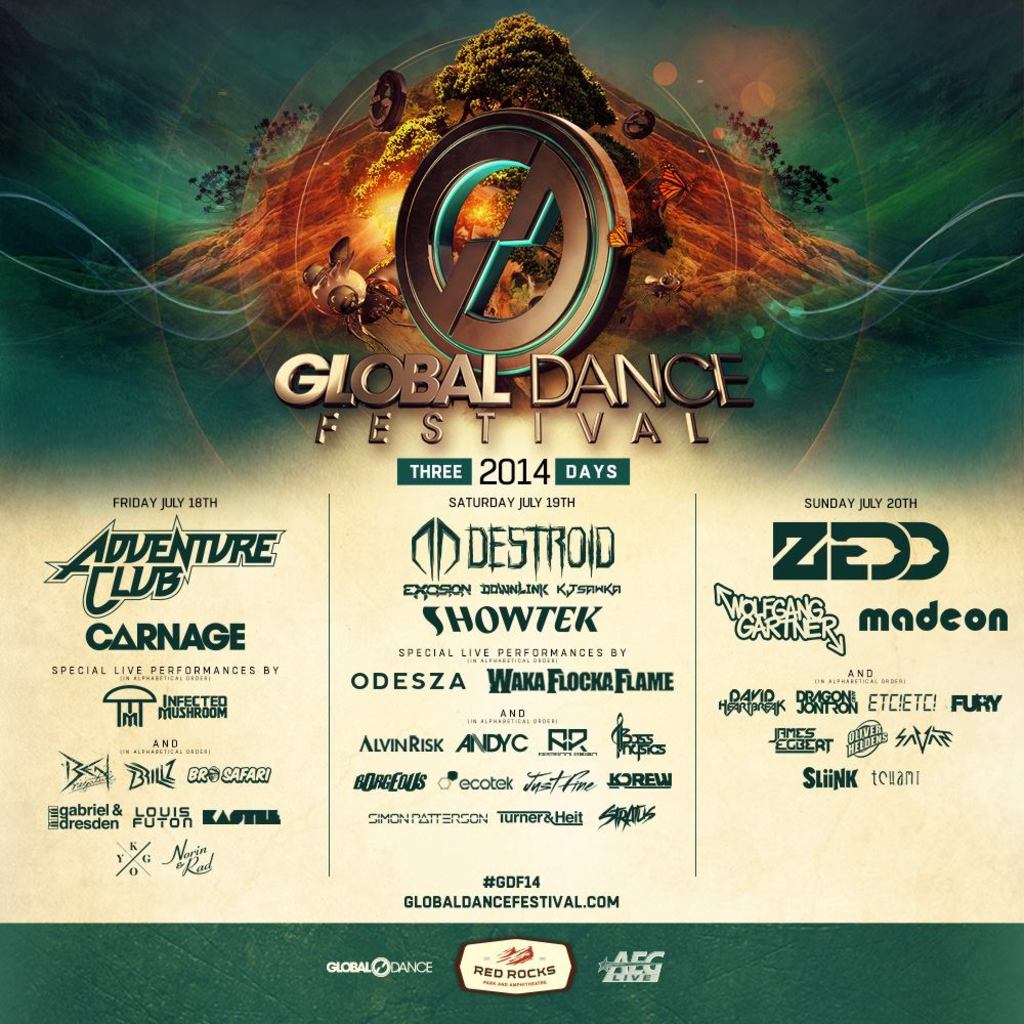 Global Dance Festival opens up this Friday, July 18th with a ton of awesome performers. There is a solid mix of artists with varying sounds, which are all sure to get Red Rocks up and dancing. Gabriel & Dresden, Louis Futon and Decadon will kick the night off, getting the crowd in the swing of dancing furiously. Then come Brillz and Bro Safari, bringing the heavier grime to Red Rocks. Infected Mushroom and Carnage will open up for Adventure Club on the main stage, while Kastle and Mostro close out day one at the other two stages.

Day two has another great mixture of artists, including Lost Empire, Odesza and Bass Physics. The main stage will be focused primarily on heavy bass, with Alvin Risk, Andy C, Showtek, Waka Flocka Flame and Destroid performing in that order to finish the night off. Sunday will soften out a bit with Madeon, Wolfgang Gartner and Zedd closing out the festival on the main stage. There are so many amazing artists at Global Dance Festival this year that they all can’t be named, but make sure you go experience them yourselves. Everyone performing at Global is guaranteed to get you dancing.

Global Dance Festival is always one of the premier electronic music festivals of the summer, so don’t miss what will be an absolutely insane weekend. Buy your tickets today from www.globaldancefestival.com beginning at $150 for a three-day pass. Bring your friends and spend an amazing weekend at one of the best venues in the country.