Buy The Ticket, Take “The Ride” – Telluride’s Stage Schedule for This Weekend’s Festival

It’s no secret that Telluride is a Colorado festival mecca. The gem of a mountain town is ideal for a road trip excursion to embrace your inner Festivarian and do some dancing amongst the San Juans. The Ride Festival is Telluride’s baby- celebrating only its third year with headliners Thievery Corporation, Spoon, Edward Sharpe, JJ Grey & Mofro, and Joan Osborne. The two-day spectacular will take place this upcoming weekend, Saturday July 12 and Sunday July 13. Tickets are still on sale for $165 for a general admission 2-day pass or single day tickets are available for about $87.50.

The Ride Festival may be the new guy in town, but it can hold its own among the greats- Telluride’s Bluegrass and Telluride’s Blues & Brews Festivals are some of the best fests around. It’s true: Telluride can do no wrong.

Read on below to see some of 303 Magazine’s less obvious picks not to miss for the weekend, including the entire stage schedule. In the words of the late, great Dr. Hunter S. Thompson: “Buy the ticket, take the ride.”

Colorado native/Nashville-based brothers Oliver and Chris Wood make truly beautiful and bluesy Americana folk music. Chris formed the group MMW (Medeski, Martine & Wood) in the early 1990s, which became a major component in the abstract jazz scene. After pursuing mutually exclusive music careers for over a decade, the brothers hooked up when Oliver sat in with MMW to play a show in North Carolina. Ultra-talented jazz keyboardist John Medeski produced the Wood Brother’s first album in 2006 on Blue Note Records. The rest is history.

Get your gospel on with these guys on Sunday morning. With about 65 members total, ranging from 17 to 70, the Harlem Gospel Choir has been touring the world since 1986. They hold residency at the BB King Blues Club in New York, providing gospel brunch regularly for locals. They’ve performed everywhere from Morocco to Slovakia, and now they’ll be in Telluride.

Hollywood’s retro-rock band has only been around since 2010, but have the nostalgic feel of bands such as the Animals or Chuck Berry. They got their start playing soul music at speakeasies in Venice Beach and Los Angeles and released their only album, The Bomb Shelter Sessions, in 2011. Vintage Trouble’s resume also includes opening for the Who and Dave Matthews Band, as well as having performed on the Tonight Show with Jay Leno. Don’t miss them play Sunday night between Karl Denson and Edward Sharpe’s sets.

Check out the complete stage schedule for The Ride Festival: 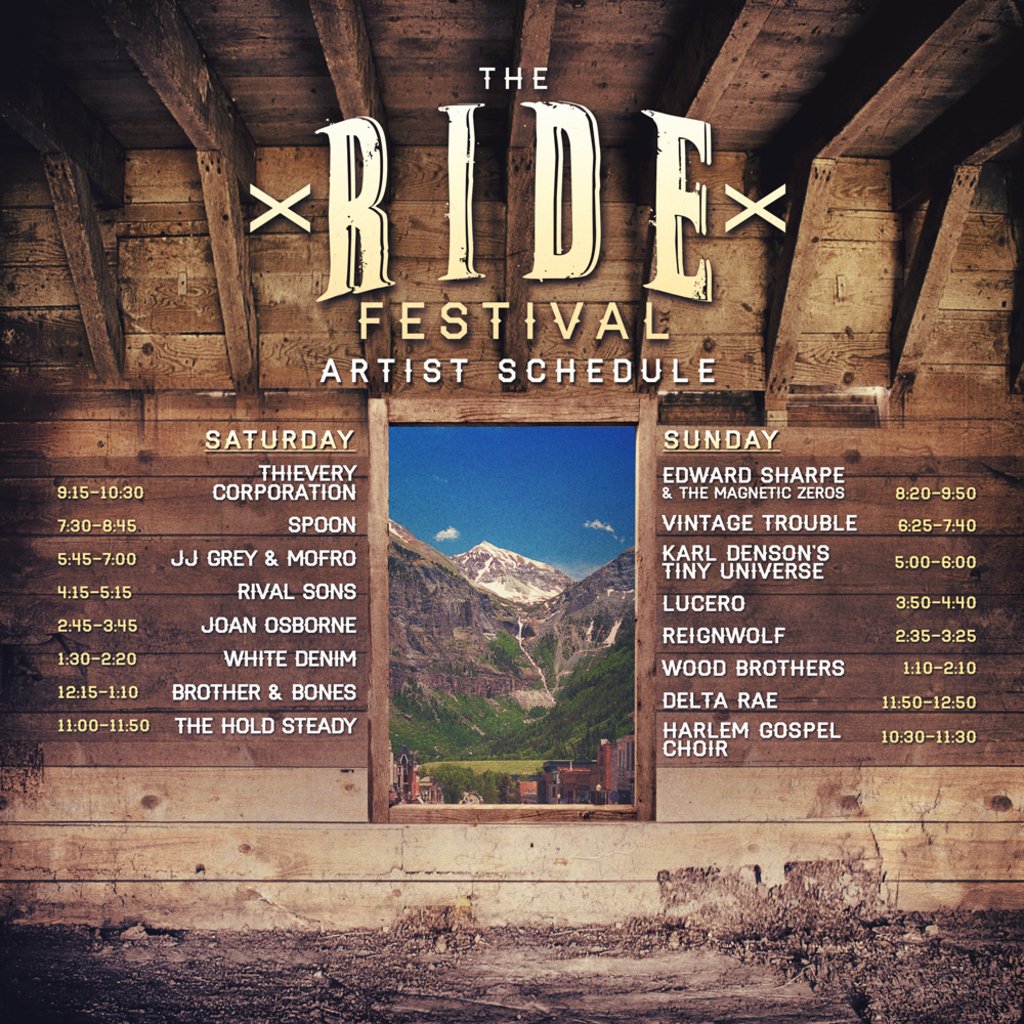