Our world has several different types of entertainment industries out there. We have film, theater, dance, music etc. However, film has the unique advantage of combining several of these industries into one, creating something audiences everywhere can enjoy from the comfort of their own couch. Well, last week Film and TV staff at 303 Magazine checked out the new movie Begin Again, a movie that does that very thing— combining the over-all inclusive experience that really only film can bring, with the music industry. So, here’s what we thought of the view….

Begin Again was written and directed by John Carney, who has written every film he has directed, such as the modern-day musical, Once. The plot involves Dave (Adam Levine) and Greta (Keira Knightley), a young and in-love, singer/song-writing couple, who move to “The Big Apple.” Once a song they wrote is featured in a movie, it provides a quick rise to fame for Dave, but a slow fall for Greta, due to her now famous boyfriend’s stray of loyalty. Then there is Dan (Mark Ruffalo), an off-the-wagon, disliked record-label exec who, after losing the career he helped build from the ground-up, spots Greta performing live in a local bar before her departure back to the UK. With Dan’s unique and artistic ability to envision the potential greatness of a song, and Greta’s ability to write many such songs, they decide to form a team; a team with the single goal of creating an album. Their hopes lie in recording an album that will get Dan back into the record-label industry and help Greta reassemble the pieces of her broken heart — they both do this by combining what they love with what they know. 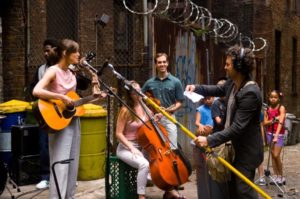 “Greta” and “Dan” making an album

It pains me to say, that though the main stars, Keira Knightley and Mark Ruffalo, are great actors individually, they lacked a comfortable chemistry. As a team they are cute and quirky, but once the film started hinting at the possibility of them becoming more, I couldn’t help but cross my fingers and hope that it was ONLY just a hint, and that it wouldn’t develop into anything more — you’ll have to watch the film to see if my wish was granted. As for Adam Levine, this movie makes his fourth acting venture (American Horror Story, 30 Rock, Email!). Though he was not as terrible as some singer-wannabe-actors out there, I would say it is still better for him to stick to what he knows and what people love him for. His performance didn’t seem scripted, per say, yet still forced and slightly unnatural. Lastly, Hailee Steinfeld played Mark Ruffalo’s sarcastic teenager. People may, most recently, know her from the movie 3 Days to Kill, and it is not hard to spot her because she plays almost the exact same character (wants attention, bitter due to her lack of a father’s presence, sarcastic cry for help etc…).

This movie is supposed to be an insight into the music industry, more specifically, an insight into the lives of musicians making it in the music industry. As such, music is a big part of the overall movie, and after a lot of research, I was surprised to find out that Keira actually sang for this role. Her voice didn’t really sound like it was hers, although this is not her first acting/singing venture; Knightley also played a singer in the war-romance film, The Edge of Love. I am a big believer in actors actually using their real voices in singing roles; it’s in-genuine to use someone else’s talent (I mean, look how terribly it turned out for Lina in Singin’ in the Rain). So, I was pleased to see that Knightley thought so as well, however terrified  she claimed to have been. I wasn’t so sure about the music at first, but then it really grew on me, and I ended the film wanting to buy the soundtrack. 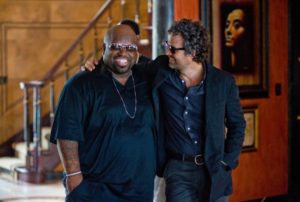 Despite some of the previous criticisms, it was an overall satisfying film. It was funny in some scenes and entertaining for its entirety. I wouldn’t say it’s a movie-theater-must, but I don’t think fans and audiences would regret seeing it. It’s a fun film that you can bring your date to, just maybe not your kids because it is rated R (only for language). It opens in select theaters July 2nd, and in the mean time, check out the movie trailer here!