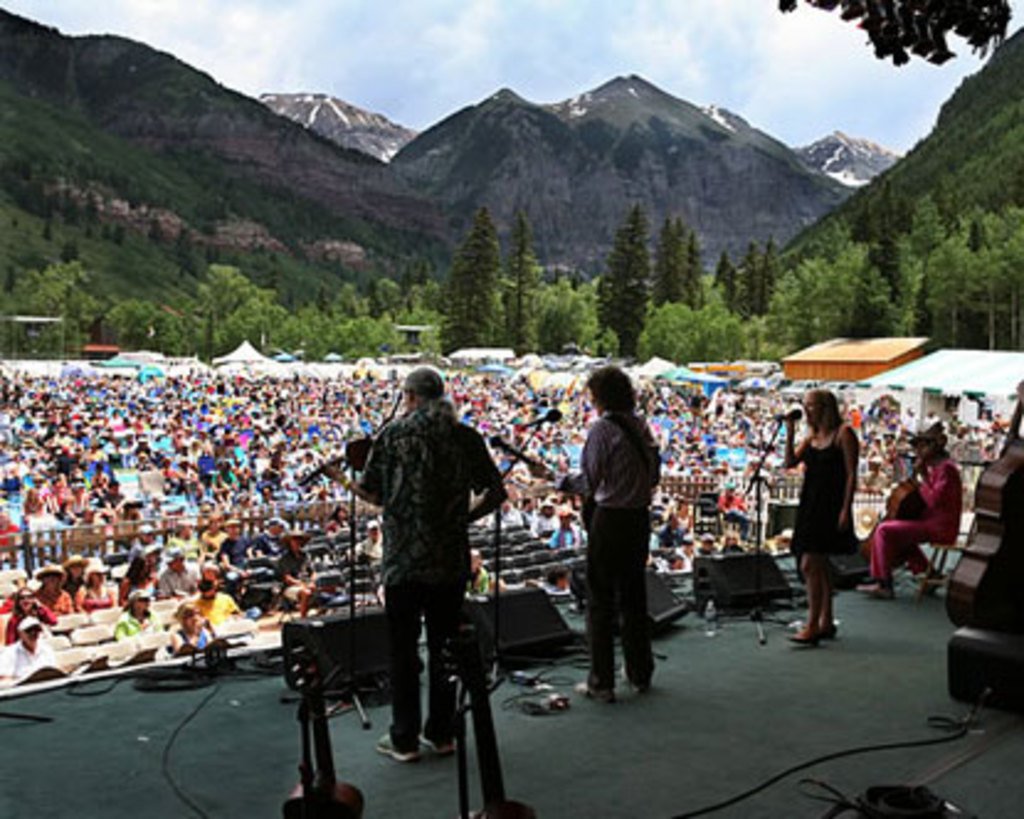 In keeping with the notion of making sure the general public is up-to-date with all things Colorado-bluegrass related, we have compiled a list of some of the top shows at this weekend’s 41st Annual Telluride Bluegrass Festival.

The Telluride Bluegrass Festival, hosted by Lyons-based company Planet Bluegrass, is one of the longest-running festivals in Colorado and often becomes the one festival that attendees return to year after year. Long-standing camping communities of festival regulars pop up with official names, like Camp Run-A-Muck, each year and become mini-havens for other Festivarians to join in on while passing by. The funky term “Festivarianism” has even been coined for the bluegrass festival and denotes the general feeling of respect, love and good times that festival attendees possess for the music and for one another.

Onto the actual music, every year Telluride has an array of legendary bluegrass musicians who are basically staples of the lineup. Diversity is then sprinkled in with the addition of other more mainstream-leaning acts. One of my favorite aspects about Telluride, and a mark of good festival planning, is that they don’t overload the lineup and spread it out over multiple stages so you have to choose one act over another. Instead, they have a seamless lineup on their one main stage, so Festivarians can nestle in and see every act.

As an avid bluegrass fan but a first-time Festivarian, these are the top five acts that I’m not going to miss.

Who? Nickel Creek is the Grammy-winning alternative folk trio who broke out onto the scene in 2000 with their self-titled album produced by Alison Krauss. But the group has actually been making music together for years before that, since 1989. Their style is contemporary with the classic integrity of older bluegrass acts.

Why? Nickel Creek broke up indefinitely in 2007 so that its members could pursue other musical interests. Fortunately, they just announced a new album in February 2014, so this performance will possess all the vigor of a newly reunited group with a long history of brilliant collaboration.

Who? Bela Fleck is basically the lord of the banjo in our time. He even traveled to Africa to study its roots in his documentary Throw Down Your Heart (which also became an album). The Colorado Symphony is the pinnacle classical music group in the state, established over twenty years ago and they recently garnered news coverage for their 420-friendly shows.

Why? As a master of his trade and a frequent Telluride musician, the combination of Fleck with the Colorado Symphony will equate to a harmonious one-of-a-kind set that will leave you with an earful of beauty and a dreamy smile across your face.

Saturday: Andrew Bird and The Hands of Glory

Who? Andrew Bird is one of those highly-talented, slightly-eccentric musicians who always has something new going on. From his work fronting Bowl of Fire, to the more recent Break it Yourself album, Bird is not afraid to explore the range of sound that his instruments can afford him. He is one of the more widely-known acts that is a treat to see appearing on the Telluride line-up.

Why? While 2012’s Break It Yourself was the classical side of his violin style, Hands of Glory is his fiddle side. The album is almost prayerful in quality and drama, with covers from the Handsome Family and Townes Van Zandt appearing on it. For an artist as talented as Bird coming out with this type of country-folk album, Telluride will be the ideal setting to experience him performing it.

Who? LaMontagne is one of the other more mainstream acts to grace the Telluride stage this year. Despite being a self-proclaimed introvert, his music has received tons of critical accolades and radio-play. His voice is one of the most unique in the acoustic game, with its raspy yet smooth, bluesy feel, it can quickly enchant his listeners.

Why? LaMontagne just released a new album, Supernova, produced by Dan Auerbach, in May, so he will have a plethora of new material to play for the Telluride audience. He seems to have connected with a notably more upbeat vibe on this album, and it sounds perfect to listen to under the sunny Telluride sky.

Who? So you thought this list would somehow exclude all of the seasoned bluegrass heroes that return every year to their favorite summer party at Telluride? Never! We just chose to include the set where they all come together. The Telluride House Band is basically all of the Telluride legends who team up for one magical, awe-inspiring, cumulative festival wrap-up set. Who exactly? Well, Sam Bush on mandolin,  Jerry Douglas on dobro, Bela Fleck on banjo,  Edgar Meyer on bass, Stuart Duncan on fiddle, Bryan Sutton on guitar and special guests Alison Krauss and Del McCoury, all on one stage performing the very last set of the whole festival.

Here is a full lineup of the festival’s act: