Hellogoodbye has come a long way since crooning the ultra-emo lyrics, “I like where we are, when we drive in your car” through the radios of every high school student in 2006. Frontman Forrest Kline has evolved, dropping the droopy heart-on-sleeve method to creating music in favor of edgier, more pointed indie-rock. Their third studio album, Everything is Debatable, boasts complexity and a fine-tuned vocal and instrumental accompaniment with heavy guitar arrangements that were clearly missing during earlier releases. The band will head to the Marquis Theatre next Tuesday, May 13th, joined by co-headliner Vacationer and opener Heavenly Beat. 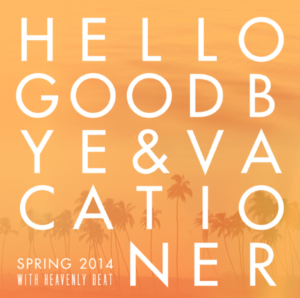 Vacationer, a tropical-synth-laden electropop group out of Philadelphia, will display their aptitude for creating truly chilled-out pop music. The band just dropped the single, “The Wild Life,” off of their new album, Relief, set to release on June 24th. Though they find roots in Pennsylvania, the band sounds more like a group of beach bums hailing from Southern California or Hawaii. Either way, the ambient vibes of Vacationer’s music calls for windows down, cold beer in hand and a summer of flip-flop-clad feet up.

Be sure to catch these two awesome co-headliners next Tuesday, May 13th at the Marquis Theatre. Tickets are $15 ahead of time and $17 day of show. Grab yours here: http://themarquistheatre.com/events.cfm?promotion=15255

And be sure to look out for a ticket giveaway on the 303 Magazine Instagram today!