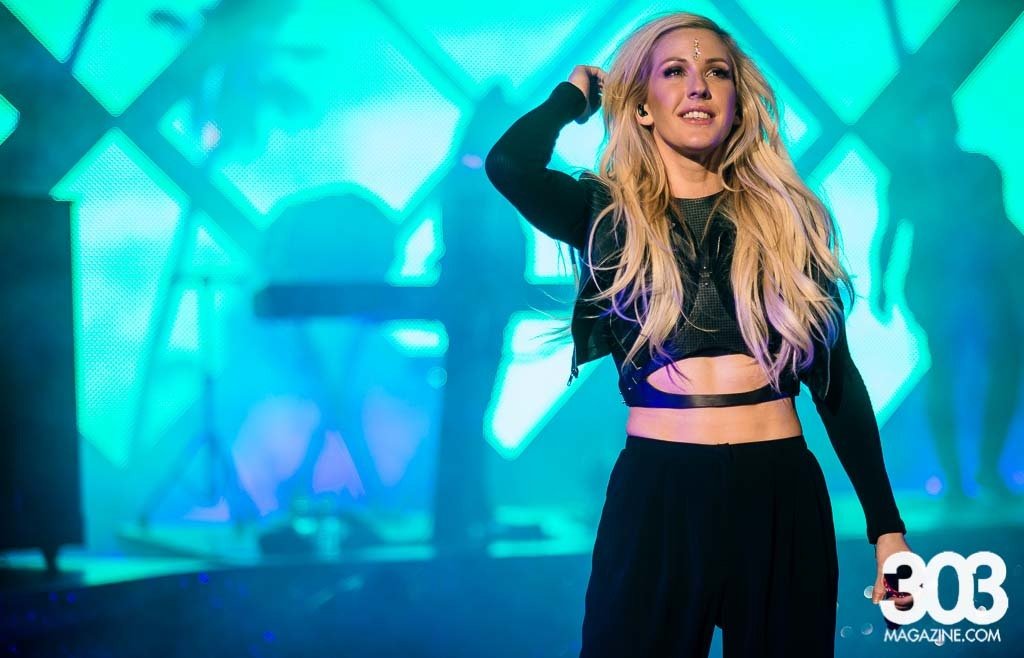 Ellie Goulding is not a human. Instead of organs and muscles inside of her like the rest of us, under her skin is just a mix of glitter and satin. This is because she is actually an extraterrestrial from an advanced far-away galaxy who has been sent to enlighten us mortals with her beautiful voice.

Okay… Maybe not. But she sure did seem other-worldy while controlling her stage at Red Rocks on May 2nd.

Her blonde hair cascaded down around her waist, while she made an arguably strange outfit of high-waisted jogging pants, military boots and a heavy leather bralette, look somehow feminine. Her aura was strong yet ethereal. But the most surprising facet of Ellie is simply when she stops to address her audience: her candid tone forces you to realize she is just a normal girl from the UK, thankful for her opportunity to be performing.

Her openers, Lovelife and Conway, got the show underway with their own energy. Conway donned a silver onesie with a blue feather collar and rocked out to songs off of her EP Big Talk, as well as her unreleased album, to a crowd that had filled up the amphitheater early on. If you had not gotten to a seat by 6:30, it was not an easy task to find one. Don’t be fooled by their flower crowns and maxi skirts, this audience was very protective of their seats.

When the lights finally dimmed, it was clear what the audience wanted. Ellie’s stage set-up began dark, aside from the LED background of a digital lightning bolt striking and crackling. The moment she stepped out on stage and the spotlight lit her up, everyone went wild. 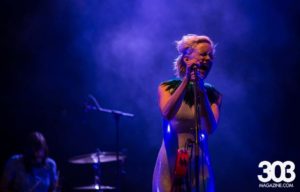 Ellie started out with high-energy, playing songs that the crowd knew and loved, one of the crowd favorites, ‘Starry Eyed.‘ After a few songs she then brought the tone down and played a slow and sexy cover of Alt-J’s ‘Tessalate.‘

She followed that mood by taking the stage alone, with just her guitar, to perform some acoustic tunes as well as her song ‘Beating Heart‘ from the soundtrack to the new film Divergent. At this point in the show some members of the crowd started tearing up, and it is worth noting that a few were straight up balling into their friend’s shoulder. So many feels Ellie, so many feels. 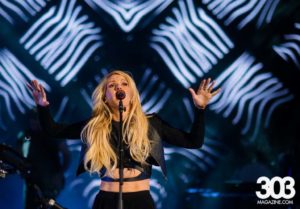 One of the highlight’s of the show was certainly her rendition of the famous Elton John single, ‘Your Song‘, which she performed brilliantly and with reverence.

After this, she turned back up the energy and got everyone jumping with her hits  ‘Anything Could Happen‘ and her collaboration with the EDM lord Calvin Harris, ‘I Need Your Love.‘ She kept the crowd moving with ‘Lights,‘ during which, at her request, the audience took out their lighters or cell phones and waved them in the air, making for an incredible photographic moment in the amphitheater.

Her set ended with everyone hopping up and down and yelling every word to ‘Burn.‘  It was easy to tell that the audience was immensely satisfied, but could have stayed for hours more just to hear her.

In particular, it was very admirable how Ellie Goulding, despite being considered one of the most successful and prominent “pop” singers in the business today, upheld a standard not seen often – her image and her show was not over-produced or hyper-sexualized. Her sincerity shined through and her natural class was obvious. She is a wonderful example for the many young fans who were present at her show, and a good example to us all of how to stay grounded.

This is one pop star who seems truly deserving of her fame.

To vicariously live through our photos of the show, check out 303 Magazine’s gallery of the show here.