Where: ViewHouse in LoDo at 2015 Market St, Denver, CO

Cons: Jim Beam Black is not joking around, and the Southern Mint Tea had a serious kick to start. It sweetened as you drank, ending on a smooth, slightly sweet, mint-tea flavor. The final drink, a straight-up Jim Beam single barrel bourbon shot, was rough without a chaser.

ViewHouse celebrated a unique twist on an old classic with the Jim Beam five-course pairing meal. Jim Beam was the guest of honor in the spacious and private downstairs bar, lining the spot with their most signature Jim Beam bottles, and telling stories about the history of the classic drink. I got a full education on the significance of bourbon plus a new perspective on the drinks Jim Beam was capable of creating. 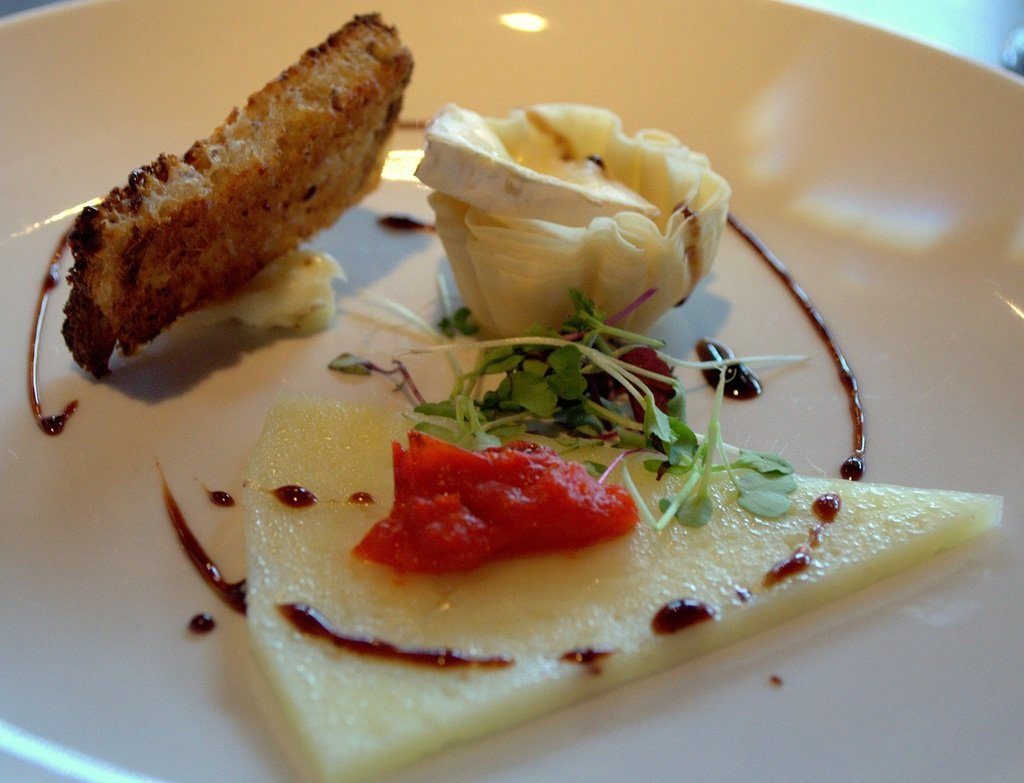 I was, as usual, wildly impressed by ViewHouse’s head bartender Mark Ross and head Chef Jose Guerrero’s effortless flavor combinations in the five-course menu. Jose and Mark first drank each of the Jim Beam bourbons and found inspiration from their flavor. They were able to build on the complex notes found in each drink while, perhaps the biggest challenge, playing with the diners’ expectations of bourbon.

The first course prepared by Chef Guerrero was a popular and light, aromatic cheese plate including brie & phyllo, Normandy camembert & rye, and a manchego iberico & peppadew. My favorite was the brie, which combined the best with the first drink, the Ginger Honey Sour. It was the perfect place to start. This surprising cocktail definitely took Jim Beam out of it’s comfort zone. It was tart yet fruity, sweet, and fresh, garnished with a zested orange peel. I like the Jim Beam Honey because it tastes more smooth and sweet than other whiskeys in the category. Still tentative of overly sweet liquors, I learned that distillation of the Jim Beam Honey uses only natural sweeteners. Thumbs up, Jim. 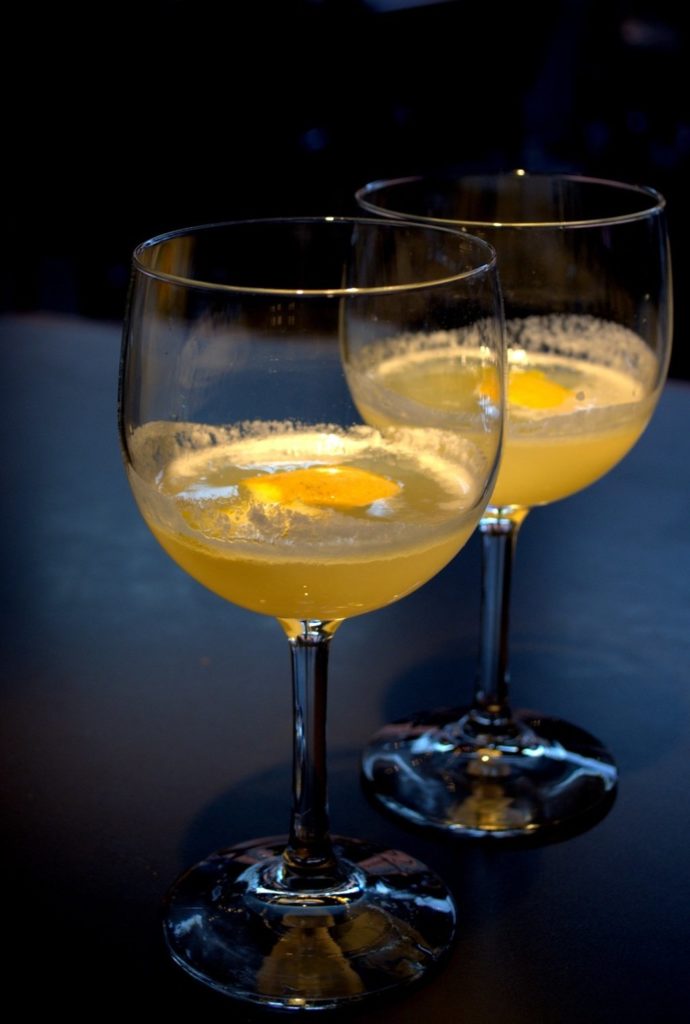 Ginger Honey Sour in a wine glass at ViewHouse

Shake all ingredients with ice and strain into a chilled white wine glass, then garnish with a zested orange peel.

While I still could appreciate the movement to our light second course of Harissa Prawns and Arugula salad with dried cherries and pumpernickel, it was the least unique dish. I was hungry at this point in the meal and this salad and prawns was just light enough to keep me wanting more. Chef Guerrero’s portions gained speed and size throughout the meal, much like the alcohol content in the drinks. The second course explored a Jacobs Ghost White Bourbon Spanish-inspired drink called Ghost Caipirinha de Uva. It’s comprised of Jacobs Ghost, lime, raw sugar, and 6 muddled, seedless grapes. The bourbon varies, yet the creativity is always guaranteed.

Our taste buds were then invited to try a pairing of a Smoked Pulled Pork “minwich” on a brioche bun with pistachio pesto. This classic yet well executed third course was paired with a Jim Beam Black Southern Mint Tea. Delicious, yet we were being teased to enjoy our drinks and not fill up on food. This was the strongest drink. Initially, I only tasted the Jim Beam Black, at a high alcohol content of 40%. As it takes a toll at first to the unseasoned bourbon drinker, the mint tea slowly got better and sweetened towards the end.

The aptly named Devils Cut flavorful fourth course blew all others out of the water. Chef Guerrero really outdid himself in his careful preparation of a slow-roasted brisket with tempura Portobello mushroom and avocado bacon fingerling potato salad. I am partial to Chef Guerrero’s style of cooking with rich flavors. All are strong and conventionally may not go together, yet they are given their place to shine in the dish. The tenderness of the brisket was outstanding. I was finally full.

The fourth drink pairing was another star, and my favorite among all the crazy Jim Beam concoctions. This devilishly red and eye catching drink goes by the name Running with the Devil. It combines the tart and acidic notes of ginger beer like a moscow mule, with apple, red wine, and an almost sangria-esque flavor. Devil’s Cut is quite a strong flavored bourbon, and I enjoyed every sip of it. Here is the delicious recipe worth trying for yourself.

Running with the Devil: 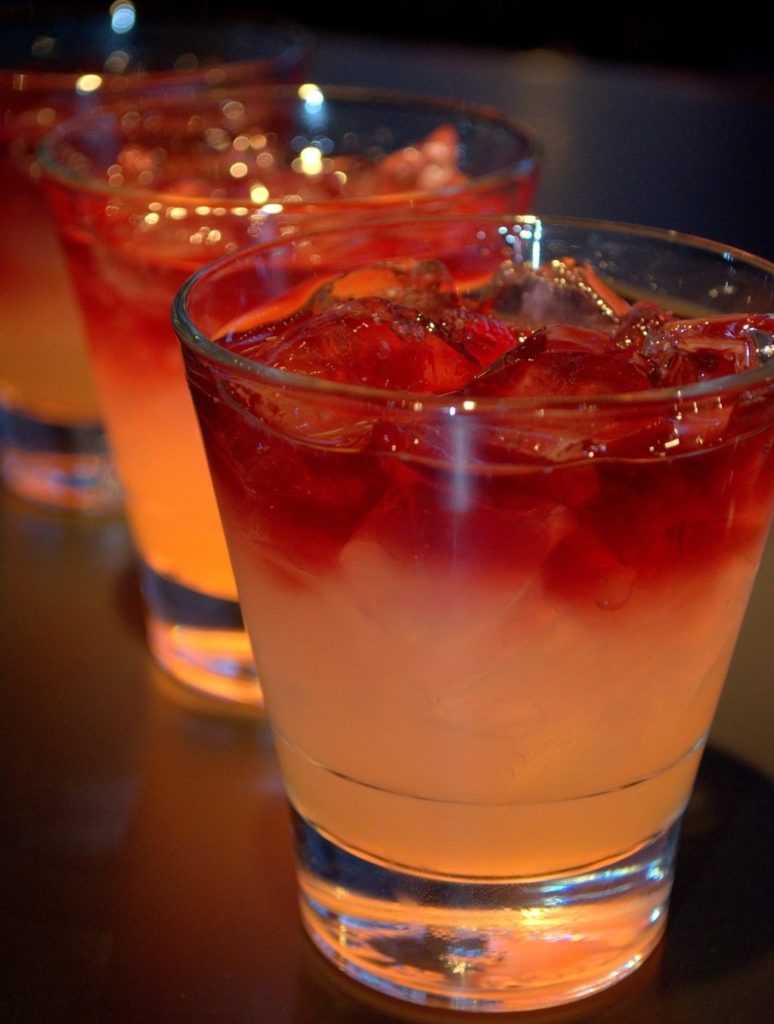 Running with the Devil at ViewHouse

Prepare in order over ice in a pint or tall glass. Garnish the rim with a lemon wheel on the rim.

To top of a lovely dinner, we were given a Coconut Sorbet as intermezzo before a light dessert of a salted caramel ice cream. The final drink was the highest in alcohol, the Jim Beam Single Barrel. Straight up for the seasoned bourbon drinker would be no problem. I tend to lean towards the smooth, the sweet, and the “I could barely taste the alcohol” cocktails, so the single barrel shot proved hard to knock back. Yet, I need to earn my bourbon stripes somehow.

The entire meal was a whirlwind of bourbon adventure. Leaving with these two amazing Jim Beam drink recipes was the best part. Take time to dine at ViewHouse and taste some seriously thought-out dinners by Chef Guerrero.

All Photography by Lindsey Bartlett. 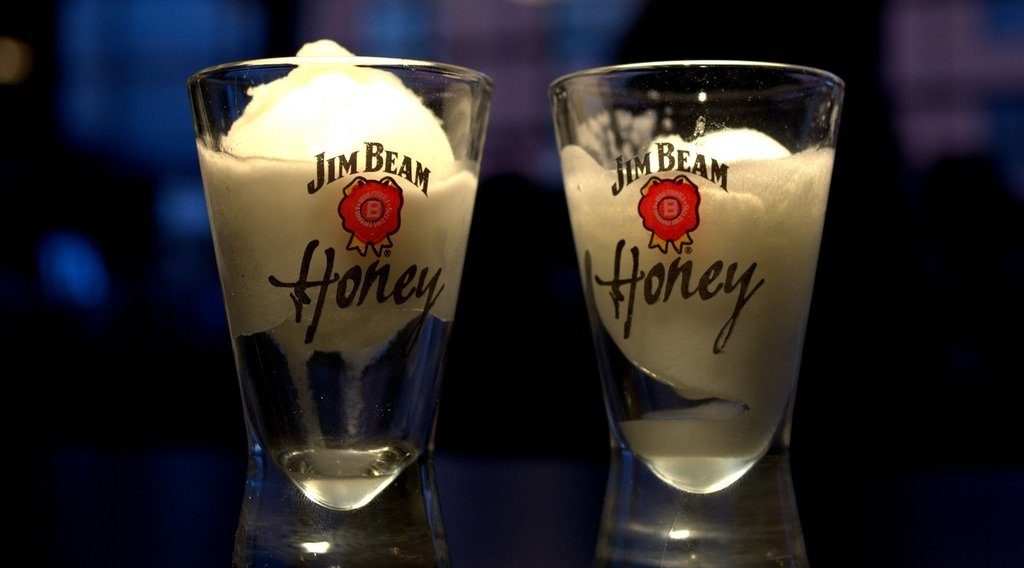