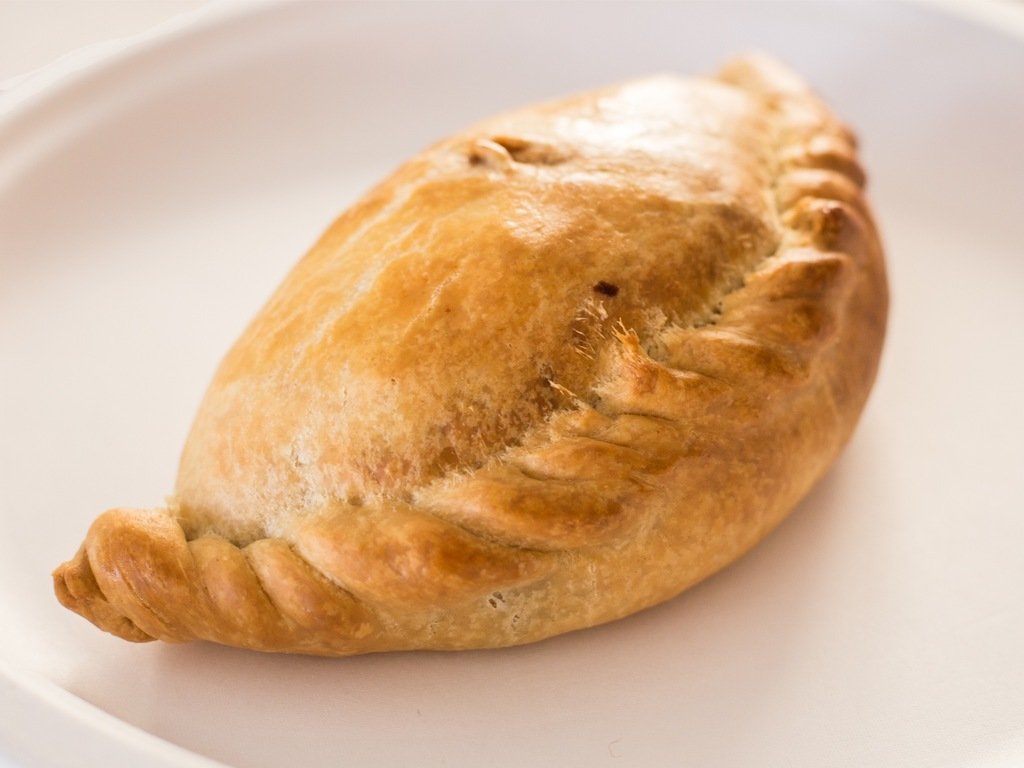 What: The Pasty Republic

Pros: First off, it’s nice to have a pasty shop in the area, as many have tried and failed at this endeavor. The husband and wife team here are deeply committed to making customers happy—offering traditional Cornish versions as well as kicked-up flavors, designed for the adventurous palates like a cheeseburger and a chicken masala version.

Cons: Some of the seasonings in the pasties are still a little off. While there was an abundance of salt in my spinach pasty, the chicken masala one begged for some. Luckily, the owners are more than happy to hear feedback and make improvements.

I must confess that I had never heard of a pasty, let alone tasted one before checking out this new addition to Tennyson Street. For those that don’t know, the pasty (pronounced “pass-tea” is a traditional Cornish handheld pastry, usually stuffed with fillings like steak and potatoes. Husband-and-wife owners Jonathan Walker and Sam Elhindi have embraced the challenge of educating people all about the pasty in the past month or so they’ve been open. “There were people who legitimately thought we were opening up a sex shop in this family-oriented part of Tennyson,” Elhindi said. Luckily for nearby residents, that is not the case. Instead, The Pasty Republic features many different flavors of pasties, handheld salads, and local Sweet Action ice cream. 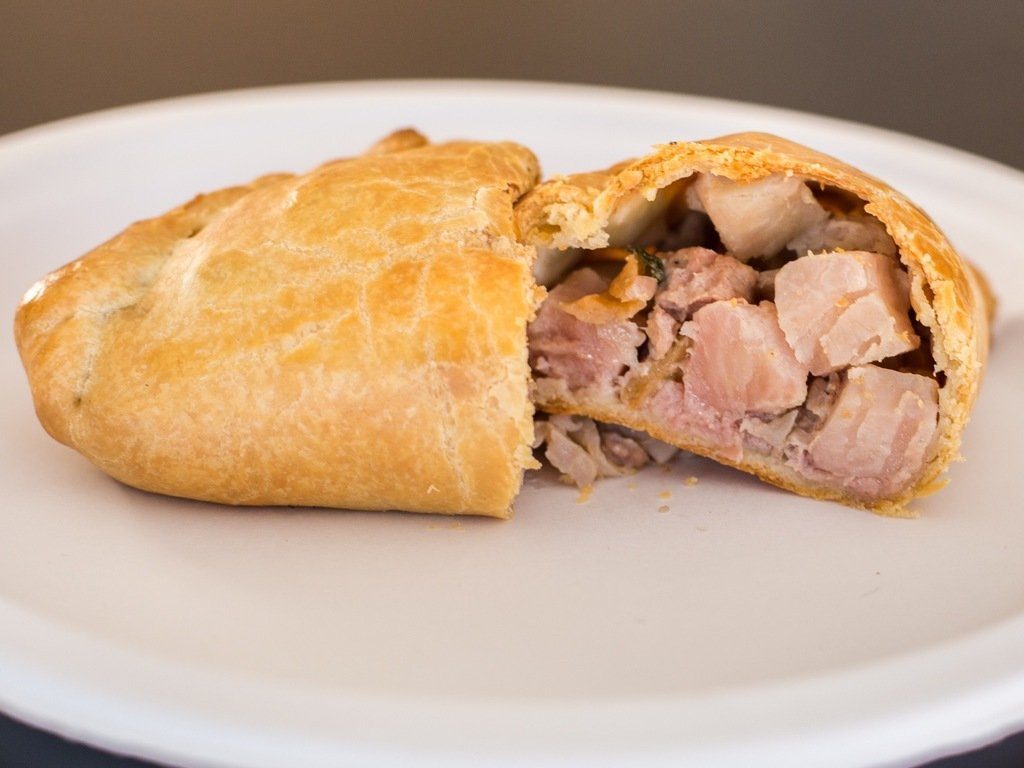 “The Miner,” a traditional Cornish pasty with steak, potato, rutabaga, and onion at the Pasty Republic. Photo by Camille Breslin.

The inspiration to open up the shop came from Walker, originally from England. During his time attending college at CU Boulder, he missed being able to frequent pasty shops, the likes of which are more ubiquitous than Starbucks in many places in Britain. He wanted to introduce Coloradans to a food he loved, and thus, the idea for the Pasty Republic, currently the only full-fledged pasty shop in Colorado, was born.

Pasties have a long history in England dating back to the thirteenth century, where they originally gained popularity among Cornish miners for their portable, hearty nature. With the popularity of fast food and fast casual here in the states, Walker knew that people would catch on, as there is a real need to be able to quickly get a quality meal that can be easily eaten on the go.

You can definitely taste the high-quality ingredients in the handmade pasties here. The Miner, named as a nod to Cornish traditions, is packed with the customary filling of steak, potato, rutabaga, and onion. I wanted to try one of the originals Walker and Elhindi have created just for their menu, so I went for “The Seasoned,” a spicy take on chicken masala with chicken, cauliflower, carrots, onion, masala seasoning, and a little bit of yogurt. While the vegetables and chicken were perfectly cooked and very moist, I found this one to have a little too much masala seasoning and not enough salt to bring it all together. That being said, I was a huge fan of the spice level and Indian-inspired flavor profile. 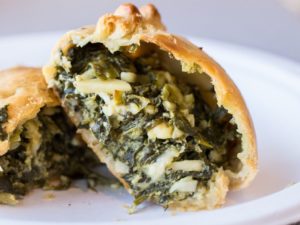 The Philosopher, a spanakopita-inspired vegetarian option filled with spinach, feta, dill, mint, and almonds, suffered from the opposite seasoning problem—too much salt. An exorbitant amount of salt combined with already salty feta cheese threatened to overtake the bright, delicate flavors of the dill and spinach. That being said, I still thoroughly enjoyed this one, which had a ton of flavor and a nice crunch from the slivered almonds.
After all the savory, you can imagine how happy I was to learn that they do in fact offer dessert pasties. Options include an addictive apple-rhubarb filling, spiced with cinnamon and reminiscent of a portable slice of pie, and also a version with Nutella and orange cream.
Walker and Elhindi are the first to admit that they are new to this business, and still in the process of fine-tuning everything, including changing recipes based on customer feedback. While they continue to honor the tradition of the pasty, they also want to make their shop a republic in the true democratic sense of the word—which is why they’re holding a “create the next pasty competition” via Facebook, giving the community a chance to participate in the creation process. The winner will be featured in the shop and named after its creator.
In the meantime, they are continuing to spread the word about their new concept, teaching people how to properly pronounce and eat (no plate, no sauce) pasties. Turns out, people are responding quite well. This is due in large part to slews of neighborhood regulars enjoying the family deal (five dollars off when you buy four pasties). I think this is definitely a solid addition to the neighborhood, where it can be difficult to grab food on the go with so many sit-down restaurants nearby. Check out The Pasty Republic today for a taste of English tradition with a Colorado spin. 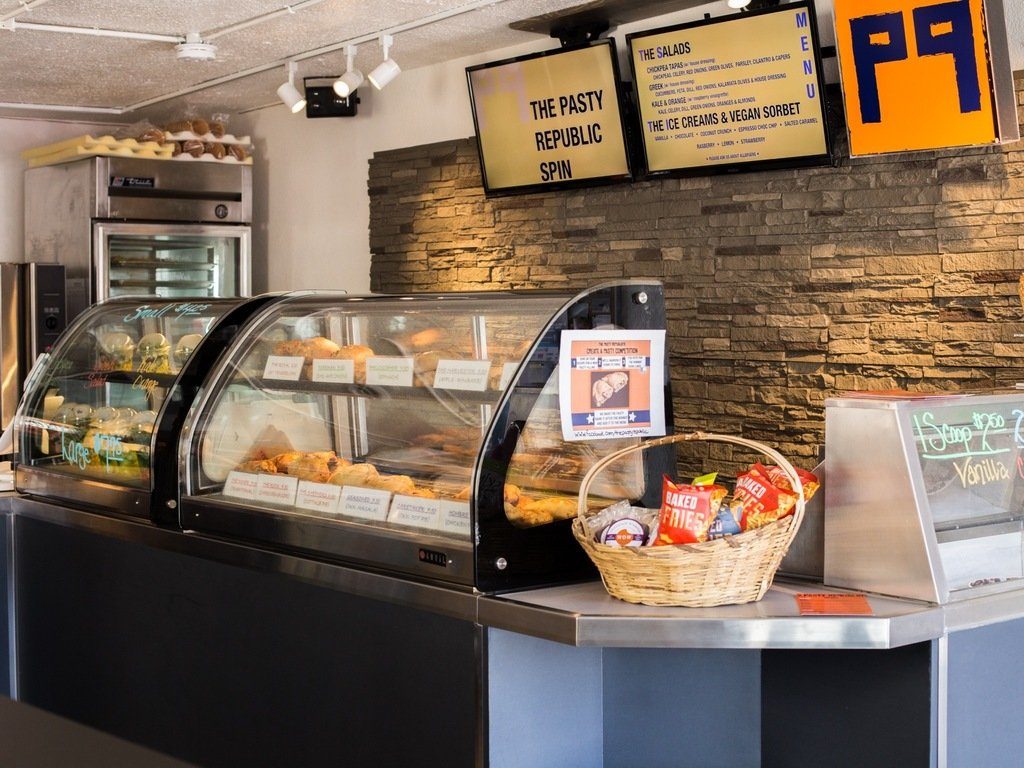 Interior of the Pasty Republic. Photo by Camille Breslin.