Looking for something different to do this weekend? Well, you’re in luck. There’s a whole lot of local happenings at Casselman’s Bar & Venue for a whole lot of nothing.

Boulder based electro-jam bands SunSquabi and Dynohunter will headline at Casselman’s this Friday, March 28th for only $5 advance tickets and $10 day of show. Whether you’re strapped for cash, but need a little musical T.L.C, or are just a supporter of the local scene, there will be plenty to go around—all the way down to the supporting acts.

SunSquabi: This electro-funk/jam band was started by Boulder natives Kevin Donohue (guitarist/producer) and Andrew Clymer (bassist) in 2011. The group added drummer, Chris Anderson, shortly after, and thus, SunSquabi was complete. Known for mixing elements of the electronic dance music experience with a live show performance, these guys have a distinctive, sophisticated and sexy sound: it’s laid back, soulful and sometimes gets pretty funky.

Their latest studio album Fundamental Interaction was released in November, and according to a statement on their bandcamp:

“is a musical interpretation of the fundamental processes within matter, and how those interactions are mirrored in our own lives.” 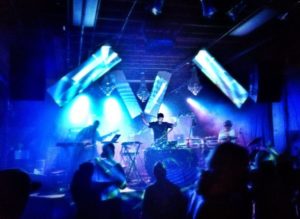 Expect heavy drum and bass fused with almost every kind of genres out there, including Latin, hip hop, jazz, trap, etc.—the list could go on. Their latest EP release Megawatts & Monoliths features four tracks and conceptually is meant to take the listener to a forgotten tribal society on the brink of war.

“Megawatts & Monoliths transports the listener to a tribal society lost in time at the brink of warfare, through driving bass-lines, powerful drums, massive synths, and dramatic builds.”

You won’t want to miss either, so get there early.