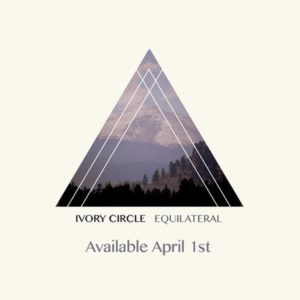 The new 5-track EP by Denver’s Indie act Ivory Circle is due out on April 1st. The album will be for sale then, and is up for live streaming now on their website. The band was started by female vocalist and songwriter Connie Hong, and producer/bassist Chris Beeble. Recently, the group has added three new members, Rob Spradling on drums, Jesse Spencer on guitar/keyboard/percussion and Sean Palmer on guitar.

Ivory Circle plays a blend of pop-esque rock and synth, with a trip-hop, witch house-inspired flavor. The melodies are primarily driven by Hong’s intense and lilting vocals — at times being compared to Florence And The Machine and Adele. The new EP, Equilateral, features five moody tracks — some of which are uplifting, and some of which are a bit more down-tempo. One of the stand-out tracks is “Abandoned,” which has a spacey, trip-hop feel, somewhat more similar to Portishead. Most of the songs on this album are slower and more emotional, with

the exception of the more upbeat, flavorful “Walk With Me.”

Ivory Circle will be celebrating with an album release party/concert at The Walnut Room on Friday, April 4th, accompanied by Stephanie Dorman and Red Fox Run. Tickets are $10. Come out to hear some soulful tunes and grab the new album! If you can’t make it, feel free to pick up a copy of Equilateral on iTunes.

For tickets to the show and to preview the new album, go to:  ivorycircle.com