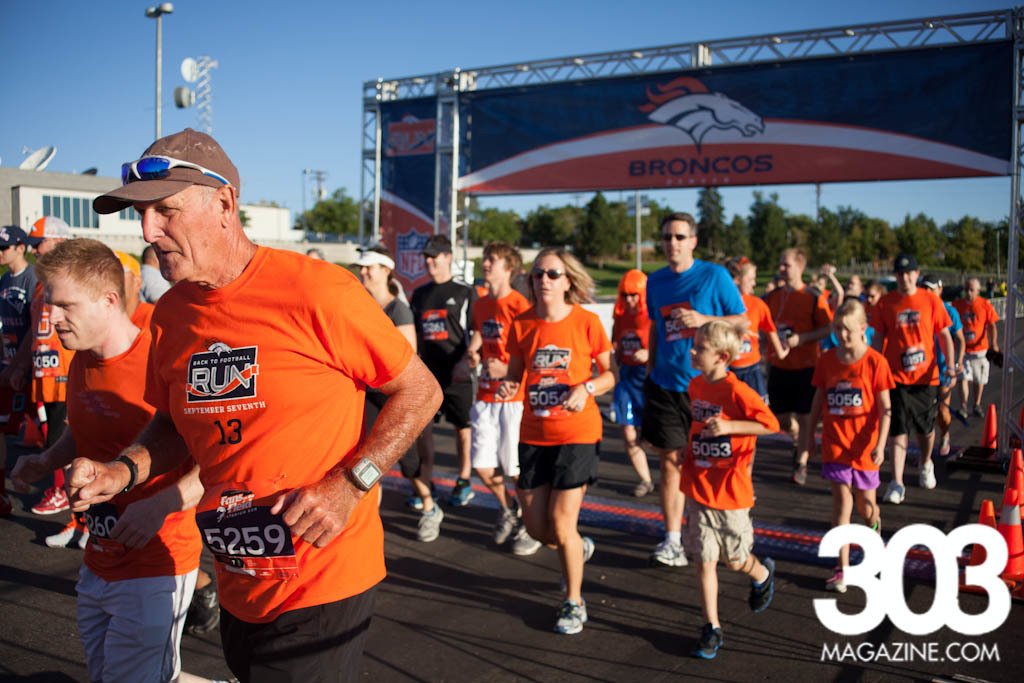 Sideline Teaser: A Mile High Salute To The Broncos Back To Football Run Series

It was a typical Saturday morning in Denver, with unusually hot temperatures for September. A picturesque orange “Broncos sunrise” began peeking its way through the sharp Denver skyline and onto the edges of Sports Authority Field at Mile High. Competitors dressed in orange began stretching — eager to  take the field. They placed their right hand over their hearts while mouthing the words to the National Anthem, waited for the whistle to blow, and were off like a herd of champions. But for once this tale does not end with a 7 touchdown victory over the defending Super Bowl Champions. No, this day belonged to the fans.

I think when you see people rally around something — whether it is a professional football team or a cause like ours, seeing people coming together is really inspiring. 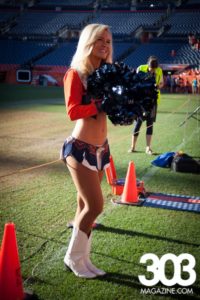 Last Saturday, Sept. 7, just two days after a defiant  win against the Baltimore Ravens in the NFL Kickoff game over 2,000 Broncos fans participated in the Broncos Back to Football Run to celebrate the return of football season. The series included a 5K, 10K, Fans on the Field Stadium Run, and a PLAY60 fun run for kids. All races finished on the 50 yard line of the field — right where the mile high magic happened a mere 36 hours before. It was the first time this event took place in Denver, among a 12 city list across the country.

“We finalized the partnership with the Broncos about six months ago” said Alan Culpepper, two time Olympian and event spokesperson from Competitor Group. “Fans are critical to a teams success. We have a winning team, and the fact that we can give fans a chance to experience the stadium like this is amazing.”

Whether participants were running the course around Sloan’s Lake in the 5K/10K or casually strolling through the visiting team’s locker room in the Fans on the Field Stadium Run — all roads led to the 50 yard finish line where Broncos cheerleader’s awaited with smiling faces and pom poms. After crossing the finish line, while looking to the sky for some much needed oxygen, you could not miss seeing your face projected onto the new (3rd largest in the NFL) stadium jumbo-trons. 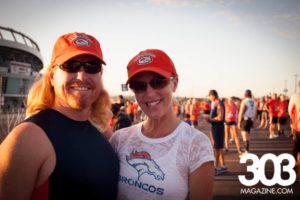 Mike and Wendy Reid are season ticket holders living in Southern California that make the journey to Denver for as many games as they can. Sticking around after last Thursday’s win against the Ravens, they elected to participate in the stadium run/tour.

“Although we run marathons and do 5K’s with our two sons, we figured with the altitude here that we might want to stick with a less grueling option” Mike Reid said. “Plus we are eager to see parts of the stadium that we would not get to see otherwise.”

The event benefited the National Sports Center for the Disabled — one of the largest outdoor therapeutic recreation agencies in the world who focus all of their treatment on sports. President and CEO of the NSCD, Becky Zimmermann, who admits she refers to herself as a Broncos “fanatic” could not think of an event better suited to benefit her cause:

“I think it is the energy. I mean I go to every game, and I think when you see people rally around something — whether it is a professional football team or a cause like ours, seeing people coming together is really inspiring.”

And at the end of the day as the sun set over the Rocky Mountains, the victory did not lie with the infamous boys of fall, but with the loyal fans, bleeding orange from the blisters on their feet.

All photographs by Jacqueline Collins