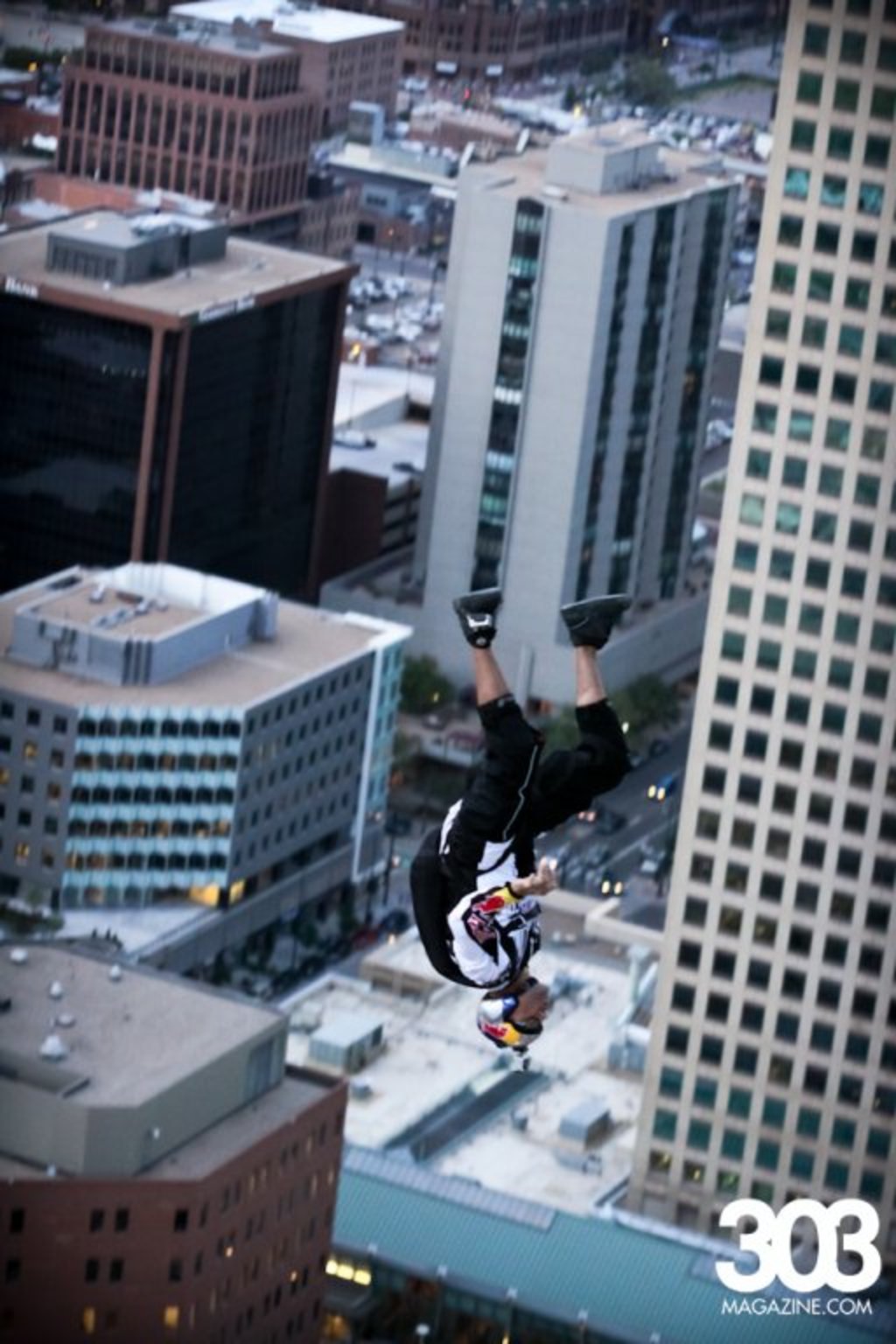 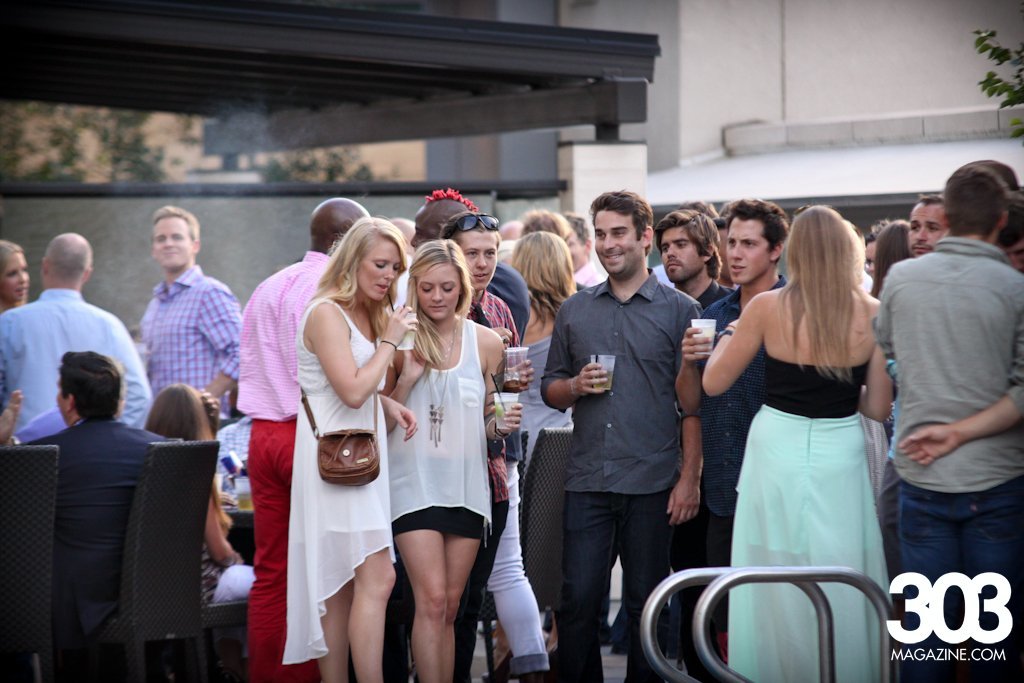 A quick lesson in BASE jumping is much less daunting if you’re only writing about it. Up on that ledge, the faintest bit of doubt can change everything in an instant and suddenly that crash course in flying ends in a sloppy manner, befitting the name.

But these guys are seasoned professionals. Sure, when the Joe up the street almost misses a step down his patio, his balls are in his throat and he is convinced a painful plop is imminent.But Jeff Provenzano and Miles Daisher are masters of their bodies and need to jump from building tops to get the same jolt of excitement that Jose from down the street endures when his slipper catches the wrong stair.

“If at first you don’t succeed, BASE jumping is not for you,” a bit of insider knowledge from Daisher.

It was a big affair at the Four Seasons Denver. There were fresh hair cuts, freshly pressed suits, pampered toes, skirts galore, legs for days, shined shoes, a parade of media and a line nearly wrapping around the building to get inside and upstairs to one of the last EDGE poolside cocktail parties of the summer.Donations were also collected at the door for the Colorado Scholarship Coalition- helping provide scholarships to non-traditional Colorado students.

Before the evening’s main event there was time to kill-I left the media area to get a feel for the environment and all its guests. I’d never heard of ‘Monaco chic’ until it was a dress-code suggestion at this party. I had done my best to meet the criteria and walked with a half smile-half scowl, thinking about how confusing my facial expressions must look. I sat down at a table with a sign reading: Reserved- Martinez. “Well, I’m a Martinez,” I thought, deciding to stay seated until its reservations arrived.

A dark-haired man wearing a shirt likely more expensive than my outfit made eye contact with me before he and his date joined me at the table. I stood up to 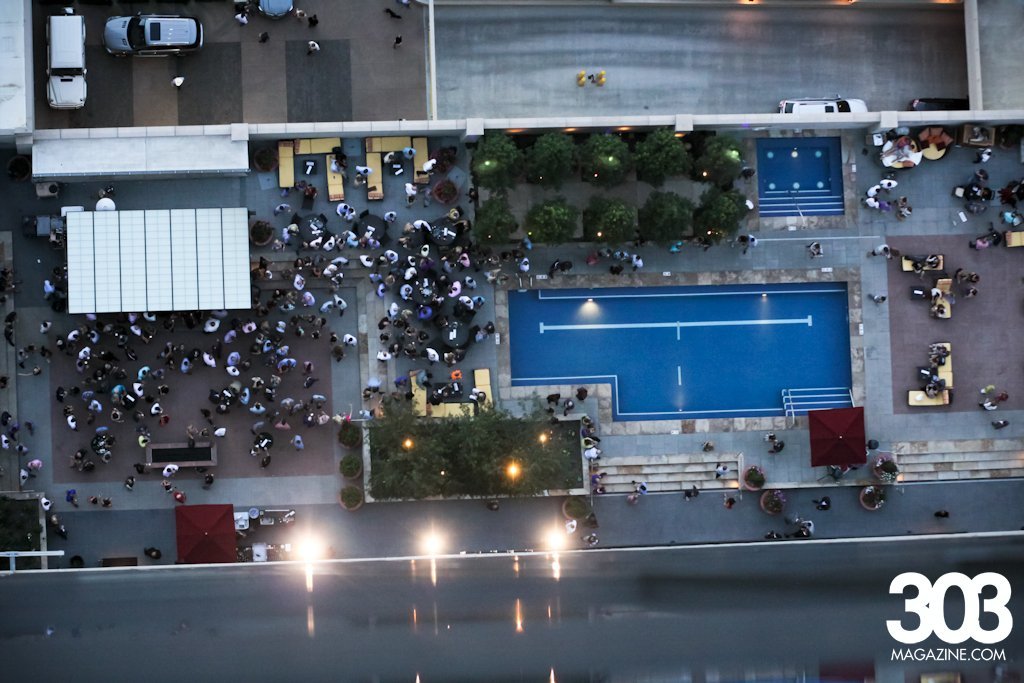 shake his hand–Arm extended he says: “Mike Martinez, nice to meet you.”

A smile plastered on my face I say: “Wow, how’d you know?”

“My name?” My tone now confused.

“No, no. I’m Mike Martinez,” he says quickly

“Well I’m Mike Martinez too,” I shot back, “I had a good feeling about this table.” Being a regular he was surprised to hear about the BASE jump. He gave me his business card and I promised not to steal his identity before we shared a laugh and parted ways.

To kick off the soiree on the 3rd floor pool deck, the DJ at the Red Bull sponsored party made a quick attempt to energize the Four Seasons crowd before Miles just as casually threw a gainer from 45 stories above the Denver skyline, making his 3,377th jump on a perfect summer evening. Cameras held high above heads in the crowd, the party barely stopping; they all look like ants to him-he visualizes the jump one last time and leaps toward the EDGE Lounge cocktail congregation below. He seems to hang in the air longer than expected-growing quickly from a dot in the sky to an action figure; he pulls his shoot, takes a few hard turns and glides out of sight. Apart from a few, the crowd is unmoved, visibly surprised at the abruptness of the feat.

“Our job is to make it look easy,” Daisher said with a widening grin, “if after watching me, any Joe thinks he can do it, then I’ve done my job.”

With ample warning to the crowd, Provenzano takes his time before jumping from the 565 foot tall bit of architectural artistry. The party seethes with anticipation.

“It’s like I was in the canyon jumping for myself,” Jeff said afterward, “I was serene, there’s no stage fright when I’m doing a jump.We train how to deal with stress, you know, we learn how to control that.”

With asphalt and concrete below him Jeff sprawls his arms and legs out as he picks up speed, the white Red Bull branded parachute explodes into the air above him, the crowd guides him down with unheard applause and just as sudden as the first, his stunt is over.

Waiting for Miles and Jeff to make the rounds through the crowd, I sat down next to 34th floor resident Carole Zeigler, owner of a downtown investment company. Upon a quick introduction she promptly pointed out the fact that I didn’t have a drink in my hand. I admitted I was just as troubled by this. In her bright orange and short puffed out summer dress with matching heels and accentuating nails, Carole stood up looked down at her bust, adjusted her dress and insisted I go get a drink.

“Oh Sweetie you need a drink. Go to the bar, ask for Danny and tell him Carole Z said to get you anything you want,” She demanded, with a finger pointed in the direction of the bar. 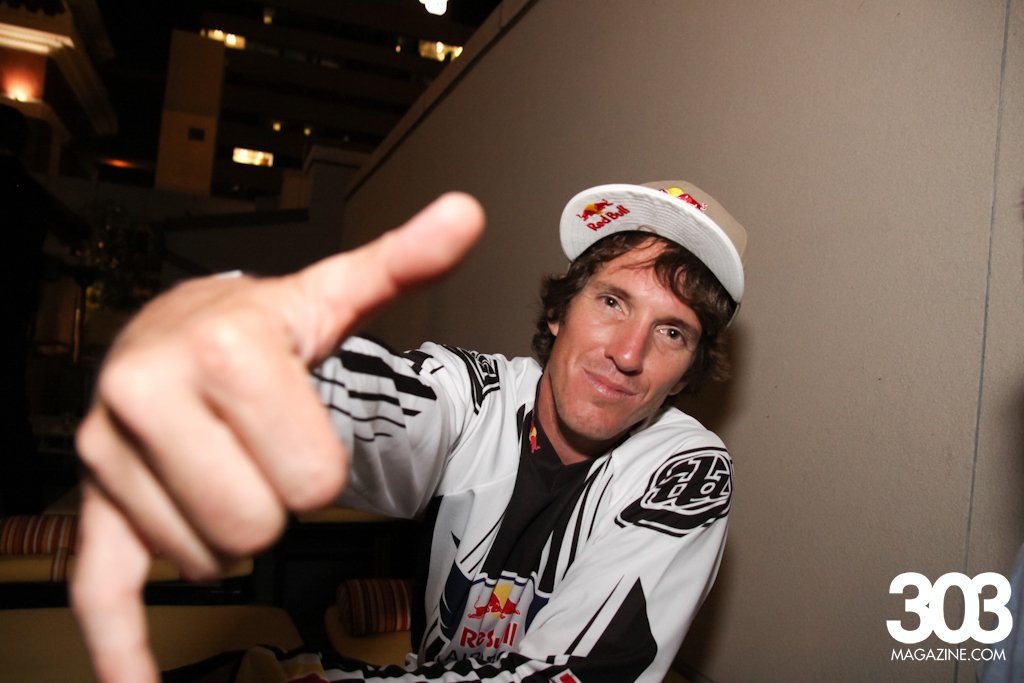 Sure enough, I go to the bar, ask for Danny, tell him Carole Z sent me and he pours me a stiff whiskey coke. The wait at the bar took longer than expected and by the time I had my drink I had found Jeff and Miles for an interview. They were as calm as can be after having braved one of the tallest buildings Denver has to offer. They are two normal highly trained extremely athletic and kind of fucking insane dudes who just appreciate being able to perform their life’s passion in front of a crowd.

“We’re just livin’ the dream,” Miles said before he and Jeff were whisked away by friends and fans.