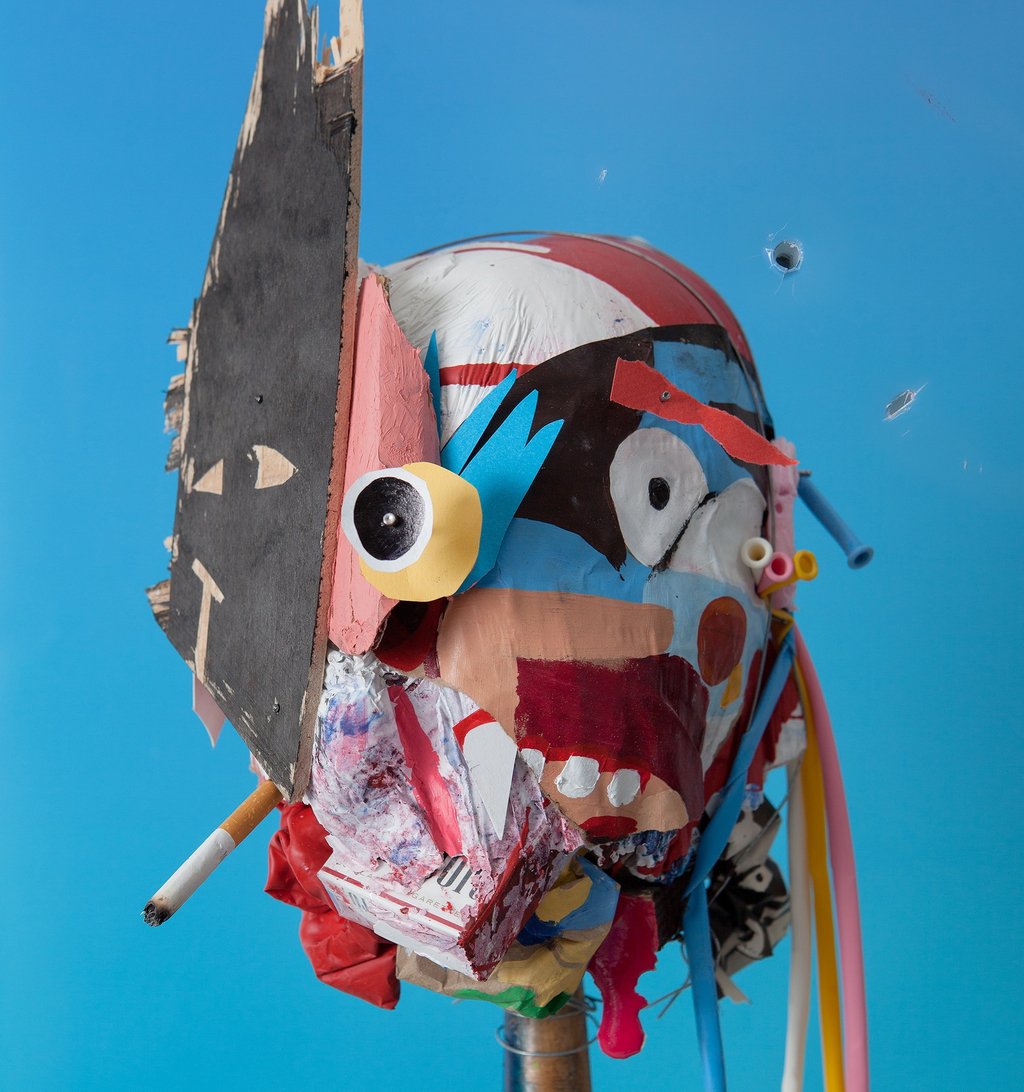 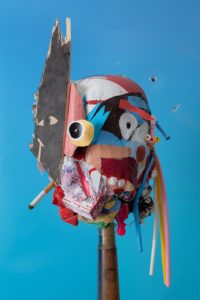 It might be difficult to think about artwork as perilous.  Sure, we might see a pointy statue and think, “I really don’t want that to fall on me.”  The ideas that art pieces might represent as perilous, however, is a little more intriguing.

Such is the work of Diego Rodriguez-Warner in his new exhibition “Perilism” premiering Saturday, August 10 at Leon Gallery.

Rodriguez-Warner is the artist behind several murals around Denver.  He has had three previous solo exhibitions and has recently gotten his MFA from the Rhode Island School of Design.

The title, “Perilism” for his latest work is a little misleading, though.  None of Rodriguez-Warner’s artwork is actually violent, but representations of violence.  The title came from a friend who, when having a discussion about “art speak” labeled Rodriquez-Warner’s work perilous, as opposed to precarious.

“I found that funny because though the themes are violent, they’re just works of art.  The idea of it, that these things could actually come at you, is more a projection of the viewer than what the artwork will actually do.  The work is benign,” Rodriguez-Warner said.

Rodriquez-Warner has always been attracted to violence, with the full understanding of its implications.

“I think it’s important to think about how we all have this capacity to be entranced by [violent images] and to realize part of us likes it.  We can recognize how terrible this is but we all watch the news.  We all watch the loop over and over again and so there’s something keeping us hypnotized to it and I’m trying to confront that honestly,” Rodriguez-Warner said.

Violence was horrid to Rodriguez-Warning growing up.  He was raised extremely leftist and his mother was a Quaker.   His father, on the other hand, was a Marxist, and so he grew up in a home of contradiction.

As a result, his work reflects his need to come to peace with paradox.  By tearing things apart and re-presenting them in his own way, he is trying to come to an understanding of how things fit.

The goal of this exhibition then, is not as Rodriguez-Warner explains, to shoot an arrow.  It’s not a series of objects in a continuation of one thing.  Instead, he is trying to cast a net so the viewers get wrapped up in the entirety of it.  He wants viewers to think about what his pieces do and not what they actually are.

“I want people to think things are really pretty and get caught up in it.  When they’re already caught then they have to begin to realize, ‘What am I actually looking at?  Is it actually something pretty or is it something I should feel bad about looking at?’  The idea is to hook them and then they’re stuck in it,” Rodriguez-Warner explained.

Unlike other exhibitions, Rodriquez-Warner has utilized multiple forms of art.  His collection contains photographs, paintings and sculptures.

“It’s hard to describe [“Perilism”] because in some places it’s photographs I’ve tinted blue or there’s a hand-carved mask and a modernist abstract painting.  So it’s kind of all over the place.  It’s becoming more and more difficult when people ask me, ‘What sort of art work do you do?”

Rodriguez-Warner puts his hands in the air, shrugs his shoulders and tilts his head to the side.

When he was younger, the concept of an artist was like a bricklayer.  Bricklayers lay bricks and artists make art.

“I have come to understand that it’s imperative to become an artist first and then you’re surrounded by art all the time.  So, I feel a great amount of freedom in the things that I can call my own,” Rodriguez-Warner said.

“Perilism” is his sanity project, as he calls it.  He has another exhibition coming out in two weeks called, “My Name is Too Long to be Marketable:  New Paintings by Diego Rodriguez-Warner.”  Rodriguez-Warner started working on those pieces in school.

“The manor of these paintings made them so laborious and pre-destined.  I knew exactly how they were going to look.  It was just a matter of going through the steps to make them.  So just to maintain my sanity I had to do outside things that would be much quicker,” Rodriguez-Warner said.

It is also his sanity project because as he explains in his explanation for the show, it is his attempt to come to peace with paradox.  He hasn’t yet accomplished this, however.

“To say I’ve come to peace with paradox, it’s a paradox within itself, right?  But I’m still working towards it and I hope to always be working towards it.  Truth is a universal ally, but I enjoy the argument, and I intend to continue to argue,” Rodriguez-Warner said.

He’ll continue that argument in Berlin, Germany when he moves in a few weeks.  He is looking for adventure, but also more of the same.

He explains, “Hopefully I’ll do [in Berlin] what I’ve been doing for years: making a mess out of a place and putting the things back together.  I’m just going to keep making art forever.”

The opening reception will be at Leon Gallery, 1112 East 17th Avenue, from 7 to 10 p.m.  For more information visit www.leongallery.com.