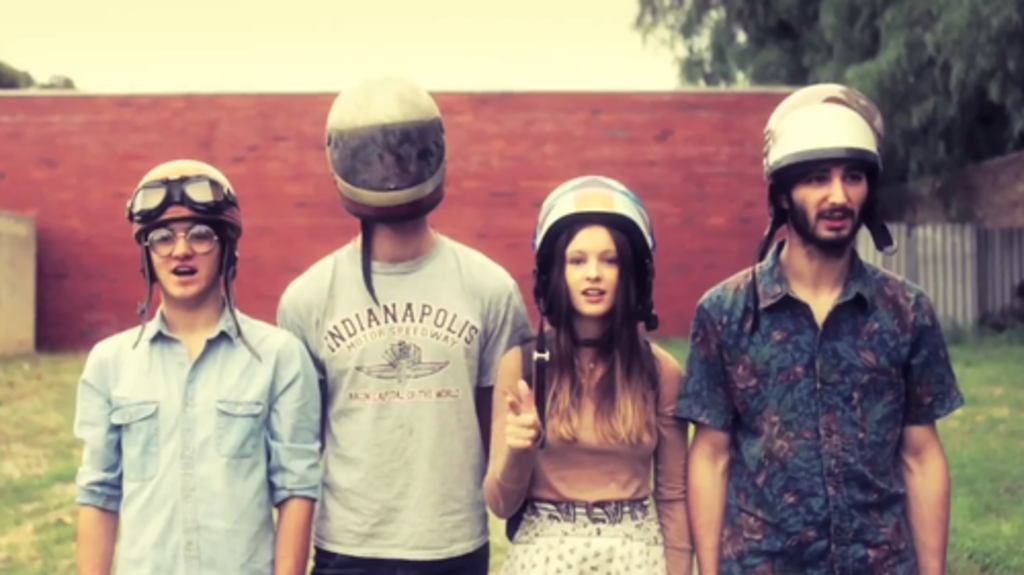 Some music discoveries can only be discerned as a lucky moment in sonic kismet. That’s how we found San Cisco. Roaming around last spring, on a particularly starry, breezy SXSW night. Heard some happy, dream-pop sounds wafting through that big Texas sky and made our way to the Club de Ville stage, in true pied piper fashion.

And. We. Fell. For their fresh take, enthusiastic manner and spirit that was anything but jaded. They’re something to behold, live. Recently we caught up with Scarlett Stevens (drums, vocals) before San Cisco hit the Lollapalooza stage. See them at The Gothic Theatre this Tuesday (8/6/13). Get your tickets here.

How old are you guys? Are you attending university?

Jordi is 19, Josh is 21 and Nick and I are 20. A few of us used to go to uni but deferred because we wanted to concentrate on the band.

You’ve cited MGMT, Flaming Lips and Vampire Weekend as sources of inspiration. Any other recent inspirations?

Of late, probably Electric Guest and Broken Bells. Those albums have given us a lot of inspiration for our next record. And Nile Rodgers! The man’s a legend.

Our van got robbed by a meth addict in Bristol. That was scary!

How much do you party, on tour?

We’re pretty chilled when it comes to partying on the road. The boys tend to let their hair down more than I do. Jordi drinks a lot of rum and yells “It’ll get ya drunk!,” in his Dave Chapelle voice.

Getting a high five from A$AP Ferg, watching Haim play and enjoying the sunshine.

How do you keep the peace, since you’re together all the time?

We try and distract ourselves with music, books, movies, etc. I think we know now not to tread on each other’s feet too much. The best way to do that is to keep yourself entertained and get plenty of alone time.

It depends on what the crowd gets into. Usually “Fred Astaire” or “Awkward.”

What do you know about Denver?

It is Nick’s favorite city in America!

What’s up next for San Cisco?

Lollapalooza, pre-production for the album, some more shows and Leeds and Reading festivals in the UK!