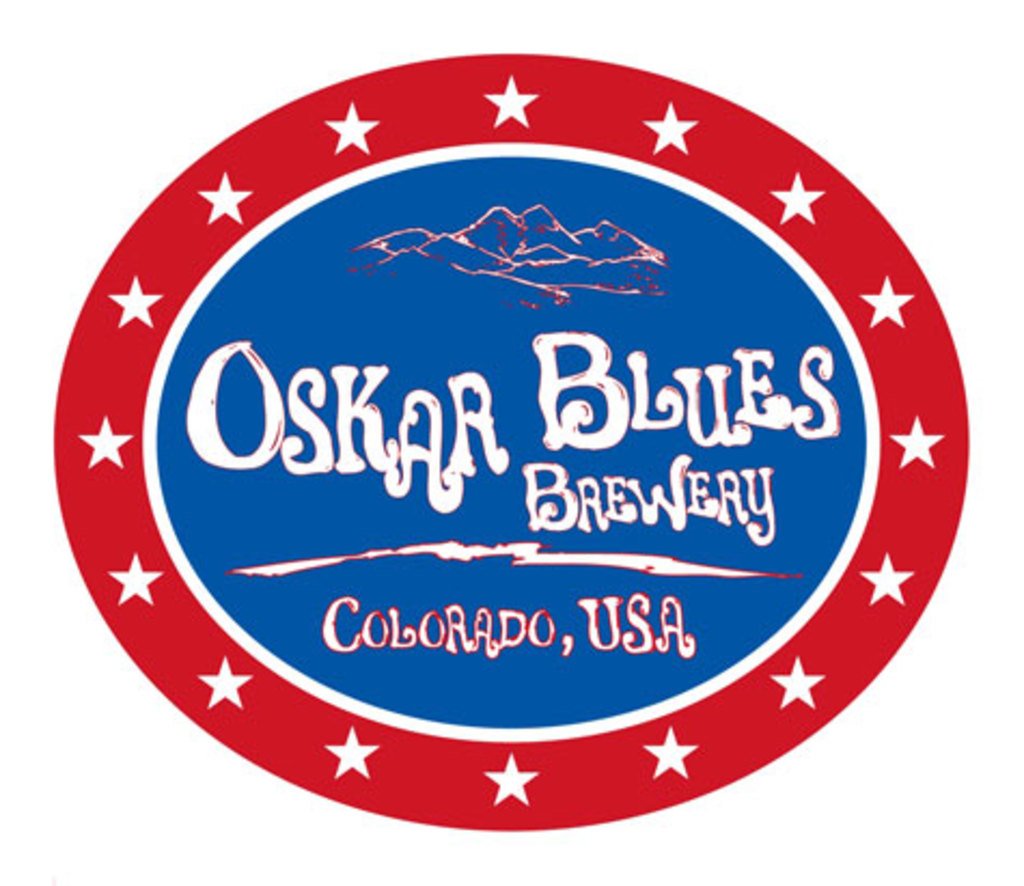 Pints Of Interest: Oskar Blues Hasn’t Taken Over the World…Yet

I was recently invited to The Tasty Weasel to visit the guys at the Oskar Blues Breweries in Longmont.

Now, I knew that I was going to see (and taste) extraordinary beer like Dale’s Pale Ale, Mama’s Lil Yella Pils,  and, my favorite, the 10% abv Gubna Imperial IPA. But what I didn’t know was how much more than beer Oskar Blues has to offer. Luckily, the people at OB are gracious hosts and decided to give me the full tour of of all of their facilities. This included the Longmont brewery, two of their signature restaurants Homemade Liquids and Solids and Chuburger as well as their 50 acre Hops and Heifers Farm. That’s right, I said farm. This massive expansion from a once ‘small’ brewery into a multi-business conglomerate, are all steps toward becoming a fully self sustainable business. Their continued growth was well highlighted through this tour and one of the most exciting aspects of this business. So sit down, grab a beer and get ready to read about some pretty amazing things going on at the ole Oskar Blues Brewery:

We started the tour where the business began, with the beer. OB is growing so quickly and making so many improvements that it was hard to keep up. The tasting room, The Tasty Weasel, is bigger than ever and is jammed packed with more merchandise than you can handle. All of OB’s signature beers are on tap, and the brewers are always tinkering with new recipes and experimenting on the lucky clientele too. You could spend some serious time in here getting to know the constantly changing line-up. A part of me is both remorseful and relieved that I don’t live nearby, otherwise I’d probably spend the majority of my days and nights here.

But besides the tasting room the Oskar Blues Brewery itself is massive. It just surpassed Odell’s brewery as the second biggest Colorado microbrewery in 2012. The Longmont brewery now fills the entire 20,000 sq. ft. warehouse, and  they are getting close to 100,000 barrels per year.

Dale’s Pale Ale continues to be a favorite session beer across the nation. Oskar Blues beer has been in such high demand that they opened a new brewery last December in Brevard, North Carolina, and recently OB went international and began shipping to the UK and Canada.

On top of all of that, Tim Matthews, the Colorado Lead Brewer at Oskar Blues , is getting ready for GABF with new and exciting brews like 10% abv Gubna aged in 40 year old anejo tequila barrels and 10.5% abv Ten Fidy aged in rum barrels.

After we finished the the brewery tour Chad Melis, the head of marketing for OB, took me for the 10 minute drive to the Oskar Blues Hops and Heifers Farm. This picturesque little plot is only 8 miles from the brewery and the restaurants, but it seemed like a different world.

Oskar Blues Hops and Heifers Farm.  Only 8 miles from the table.

Geoff Hess, the Oskar Blues Farmer, is raising Berkshire pigs and Black Angus cattle on the waste grain from the brewery and naturally grown grass as part of a fully sustainable model. Hops and Heifers is where the future and the past meet. Geoff takes advantage of new technologies that make a farmer’s life easier, but he maintains the tried and true practices and values of an old family farm by remaining committed to natural plant and animal growth, composting, recycling, and continuing sustainable agricultural education. Hops and Heifers Farm also features a 2 acre plot hosting 3,500 hop plants. Geoff said, “There isn’t enough to supply all of the hops needed for the breweries, but the idea is to grow the best hops possible for special Oskar Blues brews and one day be able to sell the specialty locally grown hops to other breweries and home brewers.” 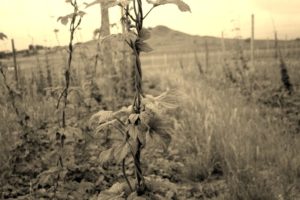 Hops and Heifers Farm also features a 2 acre plot hosting 3,500 hop plants. Geoff said, “There isn’t enough to supply all of the hops needed for the breweries, but the idea is to grow the best hops possible for special Oskar Blues brews and one day be able to sell the specialty locally grown hops to other breweries and home brewers.”

After we finished touring the farm there were still two more stops to make. First, we stopped by the newest restaurant concept Chuburger. Unfortunately I did not get to taste any of this food but the menu featured what smelled like a great burger, fresh cut fries, shoshito fries, an amazing looking garbanzo burger, and a locally grown all Berkshire pork hot dog with bacon, broccoli slaw, and shoshito peppers. 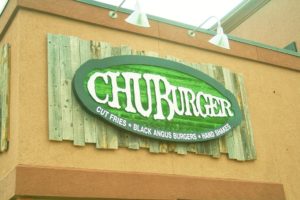 Our last stop was at Oskar Blues Homemade Liquids and Solids. This is the restaurant where OB’s Executive Chef Jason Rogers is allowed to experiment, sample, and fine tune his recipes for all of the OB restaurants including the food truck, The Bone Wagon.

The food at Homemade Liquids and Solids is edgy, interesting, bold and delicious. Everything I was able to taste had professional thought and planning behind it. We started with the crispy house smoked wings. I suggest getting the wings naked so you can have any or all of the six homemade Oskar Blues sauces. Next, Jason brought out a prosciutto flatbread appetizer. The highlight of the flatbread was the locally made G’Knight Imperial Red washed Haystack Mountain Cheese. It had a perfectly creamy texture and an amazingly robust flavor.

Next we had the seafood gumbo. This stew was hearty and flavorful, and the big pieces of house made andoulle sausage gave the gumbo just enough spice.

The next course was one of the best and most interesting dishes I have ever tatsed. It was perfectly seared N.Y. Strip steak fresh from the Hops and Heifers Farm. The steak was served on top of a mound of incredibly delicious bleu cheese mashed potatoes and fresh field greens. Finally this gourmet entree was all topped with a creamy bleu cheese sauce and Chub Onions,  which are thick slices of red onion cooked to sweet perfection in Old Chub. Then we finished it all off with a flight of Oskar Blues beer and a sweet piece of perfectly baked house recipe bread pudding.

The food at Homemade Liquids and Solids is edgy, interesting, bold and delicious. 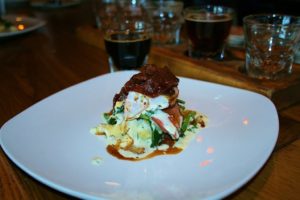 If there was one word I heard the most during my day with Oskar Blues it was “Yet”. Despite their rapid growth, recently opening a new brewery in Bervard, NC, breaking into the international beer market, maintaining their popular restaurant concepts, including opening their newest burger joint concept, Chuburger, and maintaining the Hops and Heifers Farm for the third year in a row, Oskar Blues is always looking toward the future. OB still isn’t brewing over 100,000 barrels a year, yet. The Hops & Heifers farm isn’t completely self sufficient, yet. The menus at the restaurants aren’t perfect, yet, and Oskar Blues hasn’t taken over the craft beer world…yet.