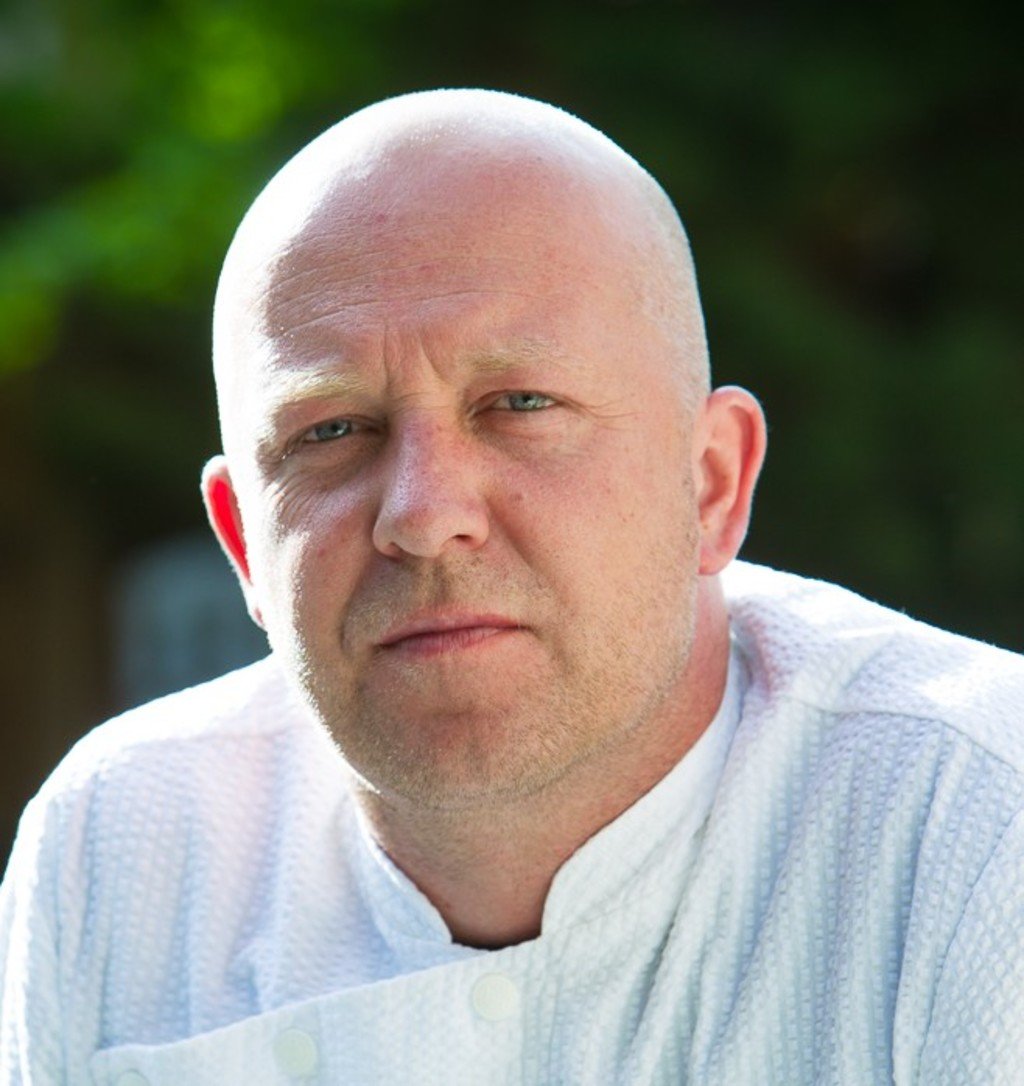 They might have thought they knew what they were going to do at my home that day, but I had other plans. I’d spent a few days getting ready for the big visit. My pantry is always full of goodies such as shrimp paste, fish sauce, bonito flakes – flavored vinegars up the wazoo – and various other condiments that have all sat dejected and unused for too long. A visit by a celebrity chef gave me the motivation to finally dive in and organize all these forlorn goodies that seem to have a shelf life of forever. The plan was to invite Stefan into my pantry and to make some magic together.

Chef Stefan definitely had an ego on the show; but the man that stood in my kitchen must have left it behind in Finland or on the “Top Chef” set. He was charming and enthusiastic, even though he had just stepped into a complete stranger’s home.

Everyone made introductions and we unpacked the crates. There were boxes and boxes of pristine Sea Cuisine products, jars of mayonnaise, arugula, baby potatoes and a parsnip. Really? They had come with prepared recipes that they’d shared with the other Denver bloggers earlier that day, but I wanted something unique.

Stefan was reading the look on my face.

He looked me straight in the eye and asked, “What do you think about a quick fire? You and me against each other?” His eyes actually twinkled! I blanched, like a pot of green beans, and choked. At that reaction, he winked and left me off the hook. He rubbed his hands together, smiled his charming smile and set out the guidelines. “You lay out three surprise ingredients. I’ll go hang out in the other room while you decide. Then, every five minutes, you add one new surprise ingredient. Sound good?”

He left the room, and the crew and I tossed out ideas. From the foyer Stefan shouts “I can HEAR YOU! It doesn’t work if I can hear you!.” So we whispered and set out the first three:

He comes in, takes a look, and grins. I think he likes the bonito curve.  The star of the show would be the Sea Cuisine Potato Crusted Cod that he was here to promote.

We had decided we wanted a restaurant look and feel for this dish, so Stefan quickly trims the potato crusted cod fillets into squares, sets them on a baking tray and preheats the oven.

Stefan plunders my pantry and asks, “Do you have coconut milk?”

“Of COURSE, I have coconut milk,” I said rather proudly.

He rattles off a litany of other needs…”Clam juice?” Of course. “Red curry paste?” No problem. “Sweet chili sauce?” YES! I think he’s just testing me, now. But I PASS!

He spots the baby potatoes and the corn on the cob on the kitchen counter that had I purchased earlier in the day.  He stands and ponders. It’s so much fun to watch a chef in the middle of creating something. If you’ve ever watched “Top Chef” you know that they all start out with access to the same ingredients and yet they all produce something quite different in the end. Every chef has a unique style, and I felt I was connecting a bit with Stefan as he was asking for some of my favorite ingredients.

He whips out two pans and is on-the-go. Chefs rarely cook one element of recipe at a time. There are always several pans on the fire. He struggles to light my gas stove, and gives up on my one flakey burner and lights up two others. In one sauté pan he adds a few sliced baby potatoes and simmers them in water.

The kumquats and parsnips are tossed in another pan with sesame oil and butter and sautéed. He adds the clam juice, bonito flakes, cilantro and squeezes juice from a lime with a sweeping flourish over the pan. This is obviously going to be our sauce. Obviously.He slices the kumquats, juliennes the sugar snap peas, and pulls out a parsnip that he had brought with him. (Who cooks with parsnips anymore?)  This is looking strange but we go with it, because of course, he knows what he’s doing and we are just along for the ride.

Next he shaves the corn kernels and tosses them in with the now drained potatoes. We’ve decided to call this a succotash.

10 MINUTES in and SURPRISE ONE

The “Coconut Curry Broth” is poured into the blender and the sea beans have been added to the succotash. Photo by Mark Woolcott Photography.

He looks at me with another grin and seems pleased to share with me how to handle these. He plucks the brown ends and advises that they be soaked in water over night to draw out the excess salty taste. But for now, we will use them as is. (Wink)  He sets them aside. They will eventually get tossed into the succotash.

“Poppy Seeds?” These get tossed into the sauce and I feel I just gave him something way too easy.

Stefan twirls the succotash onto the plate. Photo by Mark Woolcott Photography

Rice sticks are another terrific pantry item because they last forever and cook so quickly. Stefan pulls a few strands from the bundle and tosses them into the sauce. I’ve never thought of breaking up a bundle before, so I make a mental note.

He checks on the fish and takes a sip of the Blood Orange Martini I’ve made for everyone.

Everything seems to be coming together. Stefan has puréed and strained the curry broth after adding the red curry paste and the sweet chili sauce to taste and added the rice sticks to the succotash, which are now perfectly cooked. He uses tongs to lift and twirl the rice and the succotash into the middle of the plate, pours the curry broth over, lays the fish on top, and finishes with a zesting of fresh jalapeno.

Stefan finishes the dish with a zesting of jalapeño. Photo by Mark Woolcott Photography

I’m not sure, but I think that took around 25 minutes. We all stood around and ooohed and aaaahhed over this beautiful dish. It was spicy hot, with a touch of sweet. There was no cloying after taste from the cream or coconut milk. The lime juice and cilantro added a refreshing zip. The cod was moist, fresh-tasting, and topped with a crispy potato crust. It didn’t seem to have ever been frozen. The fish was elegant.

After our hard work, we retired to the back yard where it wasn’t just the seafood that was fresh. Stefan is a cutie and for the sake of keeping things PG, I’ll leave the Q&A session out of this article.