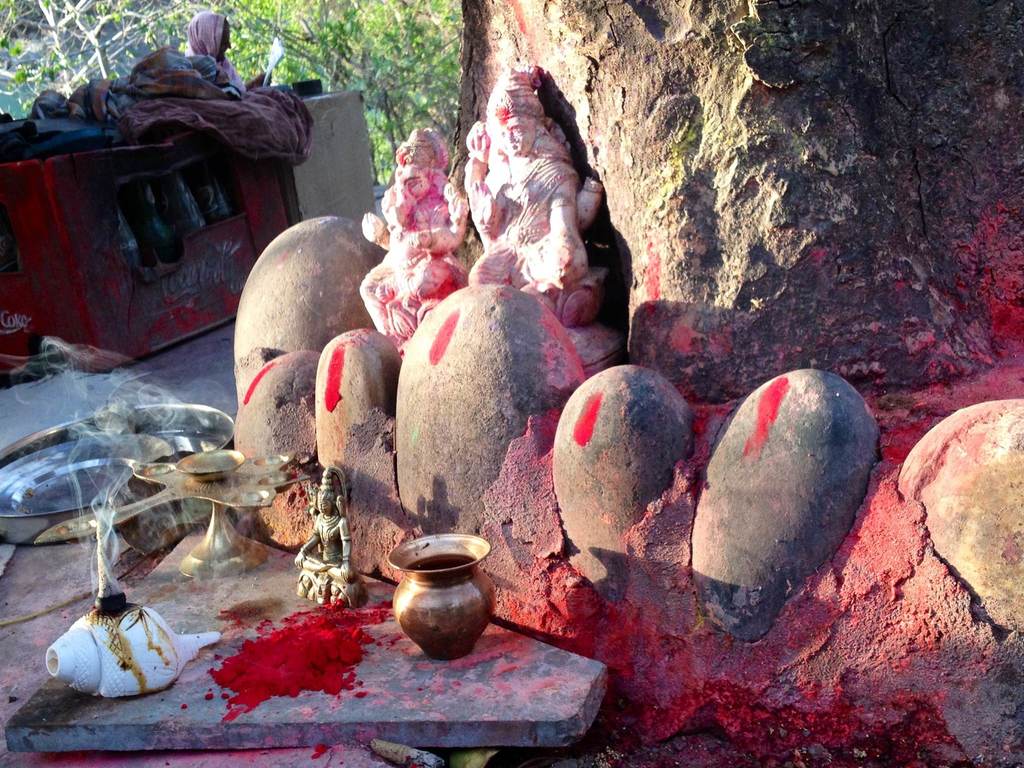 Curryland Chronicles: A Skeptic Among Us 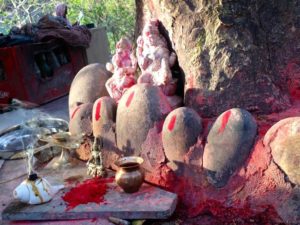 I love music festivals. I was raised by Deadheads. I enjoy road trips and camping. I definitely don’t wash my hair every day. I believe in the power of intention. When serendipitous, synchronistic events occur, I get all warm and fuzzy inside. Coincidences are my favorite. I believe in “soul circles,” a phrase coined by my best friend’s wacky mother, where we all seem to know one another amongst friends and discovering that the crowds we run with are often smaller than we think. I go to Burning Man.

But I draw the line someplace. I attribute this to my East Coast upbringing. I like to fly high while still keeping one foot on the ground. I appreciate the spirituality of India, but I do not exactly believe in God. Indian temples are colorful and ancient and magnificent to look at. Shiva, Vishnu, Krishna, Ganesh, and Hanuman are all lovable characters with enticing stories of good versus evil. Each represent attributes such as good luck, power, wealth, protection, courage, devotion. Indian gods and goddesses are similar to those of Greek mythology in terms of their creation and their contribution to the creation of the earth.

Recently while strolling through Laxman Jhula area of Rishikesh, outside of the city center but still a bustling neighborhood with a giant orange and white layered temple that resembles a wedding cake shape at its crux, we slipped off our flip-flops and went in to investigate an old temple. Curious about the story of Hamuman, the monkey god, we asked the man nearby sitting on a plastic stool who seemed to hold some sort of loose affiliation with the place. He led us over to a man who was playing little silver cymbals alongside of another man who was keeping the beat with a small drum on his lap. Instead of answering my question (which I still have yet to determine the answer to), the man talked to us for the next forty five minutes or so about various other things. He did touch on topics ranging from trekking to a nearby Shiva temple to the story of how the Ganges came about (and how Shiva stopped its unstoppable waves with his hair?) to this enlightened man who is one hundred and twenty one years old who lives up in the Himalayas and wears nothing but his underpants and meditates all day long and lives on nothing. 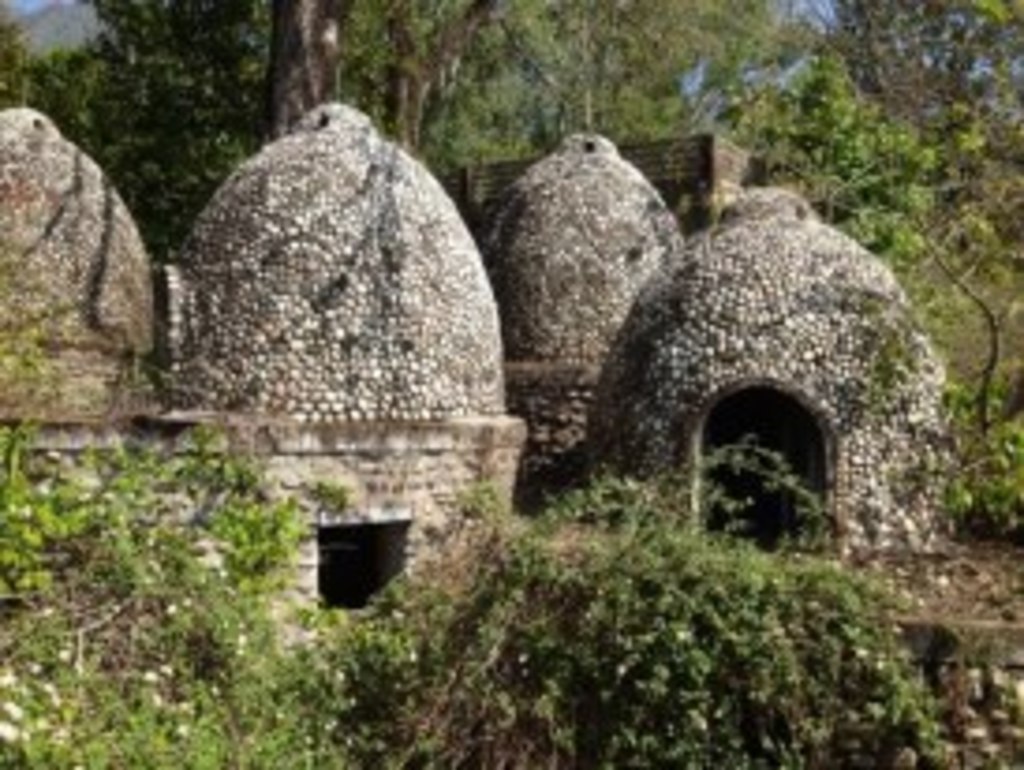 Then the man gazed deep into my eyes. He stared hard at my right palm. He guessed my age within three years. He told me that I needed to purify my soul and that I would be bringing light to many, many people. He made promises and gave time lines of his prophecies. “Within six months of your return home, you will be back in Rishikesh. Within four months from now, you will have to make a serious decision. You are at a crossroads in your life. Within five months you will…” It went on like this for a while. After some time, it sort of felt like talking to your drunk friend who means well but keeps repeating themself. “You must devote half an hour every day…” to what was left pretty unclear. “You must wake up at 5am. You must first shower.” So I should meditate? Do yoga? “No, no,” he would shake his head. “It doesn’t have to be that. Take three dips in the Ganges. You will feel it.”

It was really hard to find an endpoint in this nonsensical loop we were stuck in, but eventually I announced that I was ready for a chai and we were on our way. The man gave us his card and told us (more than once) how he does guided meditation every morning that is donation based (“One rupee or one million rupees. It is the same thing.”) and he would be more than happy to take us on a guided trek up the mountain. He stressed that it was important “not to force your soul to do anything,” and that “when people cross paths and make connections, it is for a reason.” Some of his words of wisdom were well and good but, jeez. I could see how some people could fall right into that kind of thing, head over heels. Those who are desperately seeking something are often going to find it.

And maybe I’m just not as open minded as I think I am. Maybe I could use some soul purification? But I feel fine. And for the record, I am actually not at a point in my life where I must make some crucial decision. He was a little off with his reading, but I suppose it is somewhat flattering when a seemingly wise old spiritual Indian man tells you that you are on the road to someplace. Someplace where you will help others “see the light!”

Maybe I’m just a big jerk. Perhaps I need to open my eyes to greater possibilities.

It all reminds me of a time last year while I was walking down Kho San Road in Bangkok and was stopped abruptly by some loony-toon guy who told me that I “had a blockage” and proceeded to force by arms above my head and jab at my armpits in an attempt to “unblock” me. Dude, back off. 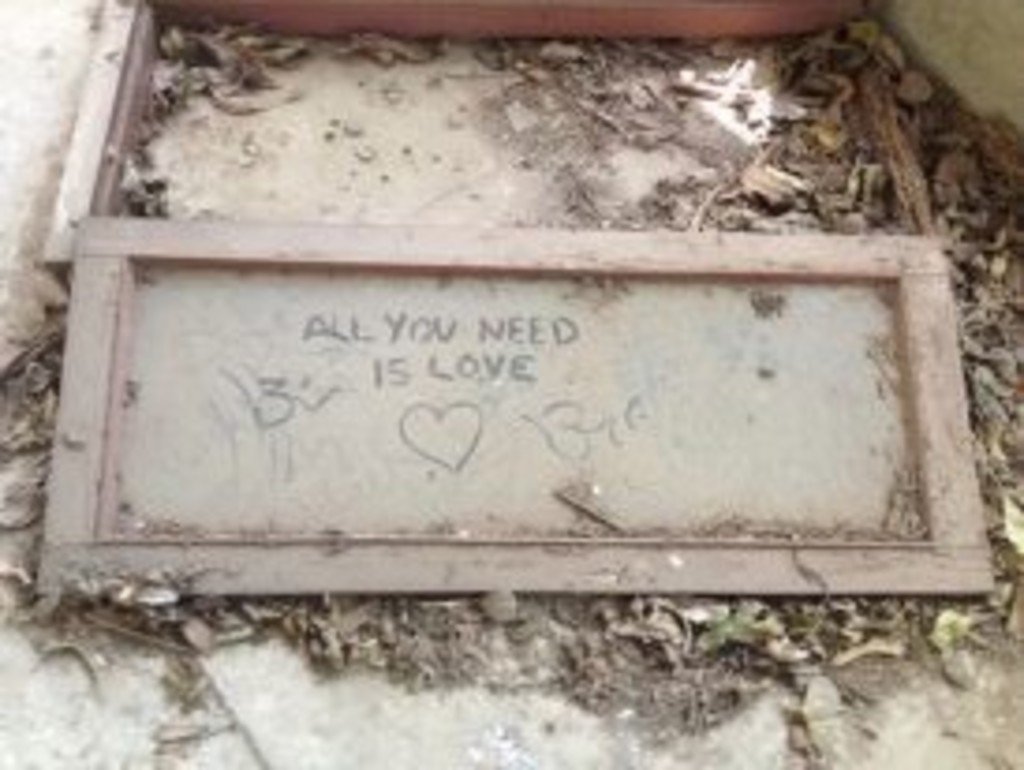 All the chanting and meditating just ain’t my bag, baby. I find spirituality on top of a mountain at sunrise or at a funky late night dance party. But that’s not to say I don’t dig the vibe. We’re actually staying in Ram Jhula, which is the neighborhood that is the holy grail- the spiritual mecca- of Rishikesh. There are ashrams everywhere, offering cheap rooms, bland food, and a one-way ticket to self discovery. Everyone is a student. At the local restaurants and cafes, clusters of classmates are huddled around thin text books, gabbing about teachers and techniques and comparing notes in preparation for tests. While we play Scrabble and read novels, yogis read one another’s tarot cards and study asanas. We eat fried potatoes and sip sweet milk tea while they snack on plain rice, chapati, and ginger lemon tea (no honey, please). None of it seems very indulgent. None of the nearby stores sell cigarettes, but they all sell Spirulina. It’s sort of like Boulder, if you took out all of the fun stuff.

But there is plenty else to do and see outside of the confines of the ashram walls. About one kilometer from Ram Jhula, where we’re living, is the ashram where the Beatles once stayed during their India retreat. After reading up on the place, it seems that the Beatles kind of acted like, well, like I might be acting. They didn’t seem too stoked on meditating all the time every day and Ringo’s extraordinary dietary restrictions proved to be complicated. I think they were only there for a few weeks, but the place is still widely popular and known as the “Beatles’ Ashram.” It is entirely abandoned and off the beaten path, literally. There are alleged main gates someplace where there are bribe-friendly guards (baksheesh is the Indian word for bribe and it will typically smooth out most situations with ease), but we followed a dirt path into the woods and scrambled over a short brick wall. 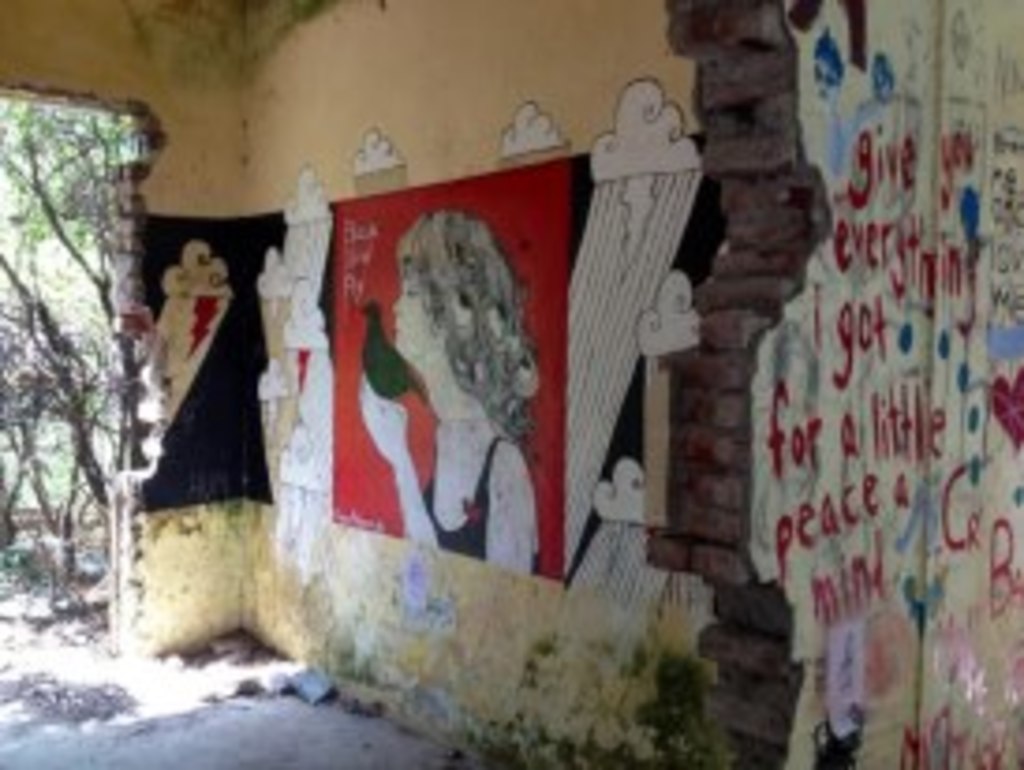 The paved path on the other side winds through overgrown jungle and is full of budding flowers and low flying, colorful birds. There are about fifty egg shaped (cuckoo-ka-choo!) meditation pods that are made of mosaic stones and are scattered throughout mossy slopes and covered by tangled bush. Many other buildings are around the grounds, including the Maharishi’s house that had a nice view of the Ganga from the rooftop. Everything was left to decompose in private but some entire walls and doors are blown out, leaving the disheveled ashram looking as if a bomb had gone off inside. Structurally sound, you can climb all over and ornate scalloped balconies and entrance ways allude to how stunning the place must have been in its hay day. There is graffiti nearly everywhere, mostly song lyrics and inspirational notes, except one building that had “Death is here,” scrawled on the walls (I refused to go in the basement here).

The Beatles’ Ashram was as haunting as it was charming. From its desolate location, you could scarcely hear cars honking or cows groaning. Back there away from all of the fuss, you could almost make out the boys trying to coax Prudence to “come out and play.”

How Denver Food Trucks Are Adapting