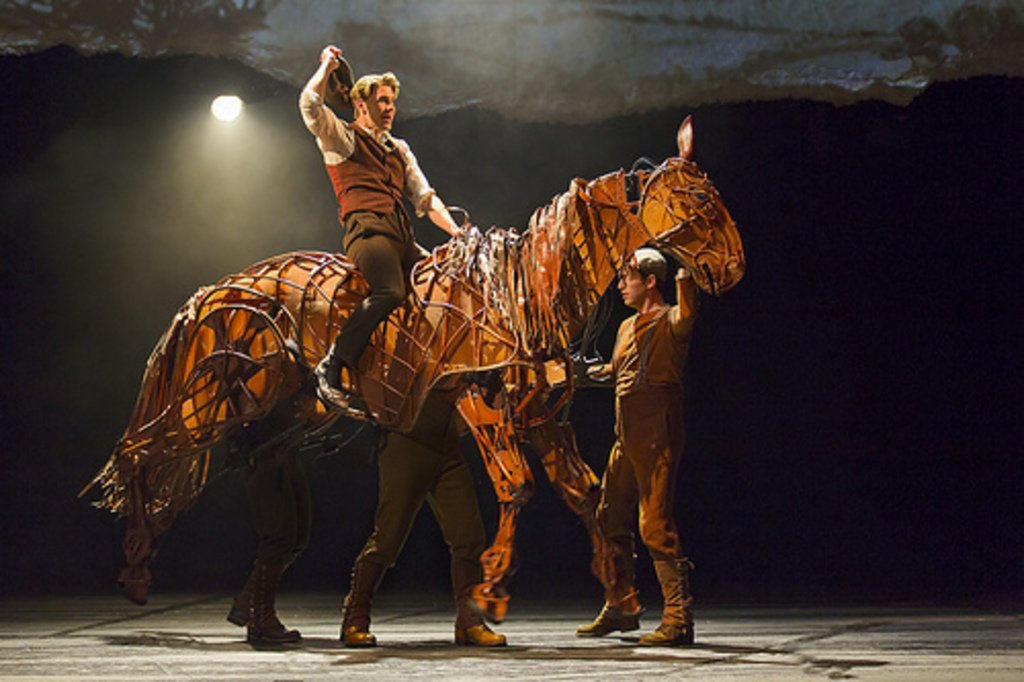 War Horse, the five-time Tony Award winner, is FINALLY coming to Denver. The play, based on Michael Morpurgo’s novel, has been seen by over two million people around the world. And finally, finally, those of us here in Denver can see it too.

War Horse tells the tale of a young boy, Albert, whose horse Joey is sent to fight in the cavalry during World War I. Too young to enlist himself, Albert sets off on a mission to find his beloved horse and bring him home.

Andrew Veenstra, who plays the role of Albert, was gracious enough to give us an incredibly candid and heartfelt interview about his experience with this highly-acclaimed production.

AV: When I was in kindergarten my mom took me to see the Broadway production of “Cats.” At the start of the show, during the procession of cats, Rum Tum Tugger walked down the aisle, patted my head, and something ‘happened.’ Prior to this, the only story telling I had experienced  was courtesy of Mr. Disney’s movies and the books read to me each night. All of the sudden I was given an active role in the story; it was terrifyingly fulfilling and excitingly joyful.

AV: When college came around and it was time to “grow up” and “be an adult,” a neuroscience major won out. Acting was more of an avocation than a vocation. [However,]the desire to be a story teller, to be a part of the magic that is movies and plays, the magic that I turned to as often as possible for escape, happiness, reflection, information, inspiration, on how to do more, be more, understand more, laugh more and love more would not go away. The full story on that collegiate major change is a long one and since you are already getting my memoir, I will simply say it ended where it began, with my mother. A conversation in a kitchen. “So what happened to being a doctor Andrew?” “Uh… Maybe not?” With a big smile on her face, [she said,] “Well, you made it longer than we thought you would.” And that was it. Once your mother gives you the go ahead you don’t need much more. Acting is the only place I’ve found that lets me keep learning, loving, feeling, changing with such unique regularity. I get to be the doctor one day, win the big game the next, grieve, spend time with Shakespeare, Shaw, and Miller, laugh, get the girl, learn, be the lead singer in the band, and go to WWI in search of my beloved boyhood horse. It’s the only career that means I don’t have to ever let my dreams die. I constantly learn new forms of happiness, sadness, of understanding, forgiveness, loss and love. It makes me think I’m actually starting to grow up.

303: What does it mean to you to be playing the role of Albert in such a highly acclaimed production?

AV: What can I say? It’s an incredibly humbling experience every day and night. It is a dream come to fruition. It is a once in a lifetime experience for any actor, and I feel so blessed and grateful that I have this opportunity. War Horse is such an ensemble piece and to get to work with so many brilliantly talented men and women on and off the stage is an experience I treasure today, yesterday, and will forever.

303: What has been the most difficult part about preparing for this role?

AV: I feel as though I am still preparing for this role. Our work on this production never stops. We are still constantly doing research, reading and sharing books, YouTube links, pictures and articles to better inform ourselves about the world we are creating and the characters we are portraying. Not long ago a few of us went to a reconstructed British trench from WWI, and it made those scenes totally new for me. Our preparation never stops. It never should.

303: What has been the most rewarding?

AV: The most rewarding thing for me is the feeling of fulfillment I get after every performance. It really feels like we’ve accomplished something spectacular and awesome, in the true sense of the word, together. And that comes from the incredibly appreciative and open-minded (and hearted) audiences we perform for.

303: What inspires you in your craft?

AV: To keep it as simple as I can I will use a rather lame, albeit completely truthful, answer: everything. I’m constantly inspired. My ‘actor brain’ is never really off; the people I meet, the conflicting things I see on the news, the work of all the other brilliant artists working today. And not just those artists making it big at the box office—it’s the painting by a seventh grader that gives me pause at a mall in East Lansing. I’m inspired by the desire to better understand all the people in this world and tell stories for and about each of us. Inspiration is, and I think should be, everywhere. It’s cliché but it’s true. The best clichés always are.

303: What’s the atmosphere like with the other actors behind the scenes?

303: Do you still get nervous before you go on stage?

AV:You know what? Not really. I get nervous for sure with other aspects of this career, like being asked to answer online questions for a magazine in Denver, or meeting a new cast on the first day of rehearsal, but when it comes to performing, it’s proven to be one of the places where I’m most comfortable. Also, when you are part of such a well-oiled machine like War Horse, surrounded by fellow actors, performers, and crew that you trust implicitly and are at such a high level of professionalism and talent, it’s hard to be nervous.

303: War Horse is a tale of friendship. Have you ever had that strong relationship with an animal?

AV: I have always been an animal lover, I long to have a pet seal (you cannot see a seal and not smile. It’s impossible.), and have always been a dog person. In fact, I lost my dog of 15 years last week to cancer. The two shows I had to do that day were some of the more difficult and emotionally resonant. It reminded me of the theater’s power to heal wounds, refine hopes and celebrate life. It was just another moment where I was grateful for the incredible power of theater and for the opportunity to be a part of War Horse… not a stage adaptation of Old Yeller.

303: Do you have much experience with horses or riding? What was it like to work with horse puppets on stage?

AV: Previous to War Horse I had never ridden a horse, but I was immediately thrown into riding lessons, horse research at various horse farms and rescue centers in NYC  and immediately fell in love with what I now consider to be one of the most majestic creatures on this planet. I will say this, my biggest take away from working with and studying horses over this year is that they are incredibly generous. These animals are so massively stalwart, so much more so than us, and they do NOT have to let us do what we do to them. Why they allow us to ride them, kick them, pull them, can only be because of one thing: Love. They are creatures created out of and designed for love. And that is exactly the magic of this puppet design. It can only be created by, operated by, and interacted with generosity and love. That is my experience every night. And it’s pretty special.

One thing is for sure: we haven’t even seen the play yet, and already we are in love. See you tomorrow at curtain call.

For more information about The Denver Center for the Performing Arts, War Horse or tickets, visit www.denvercenter.org

January 8-20 at the Buell Theatre