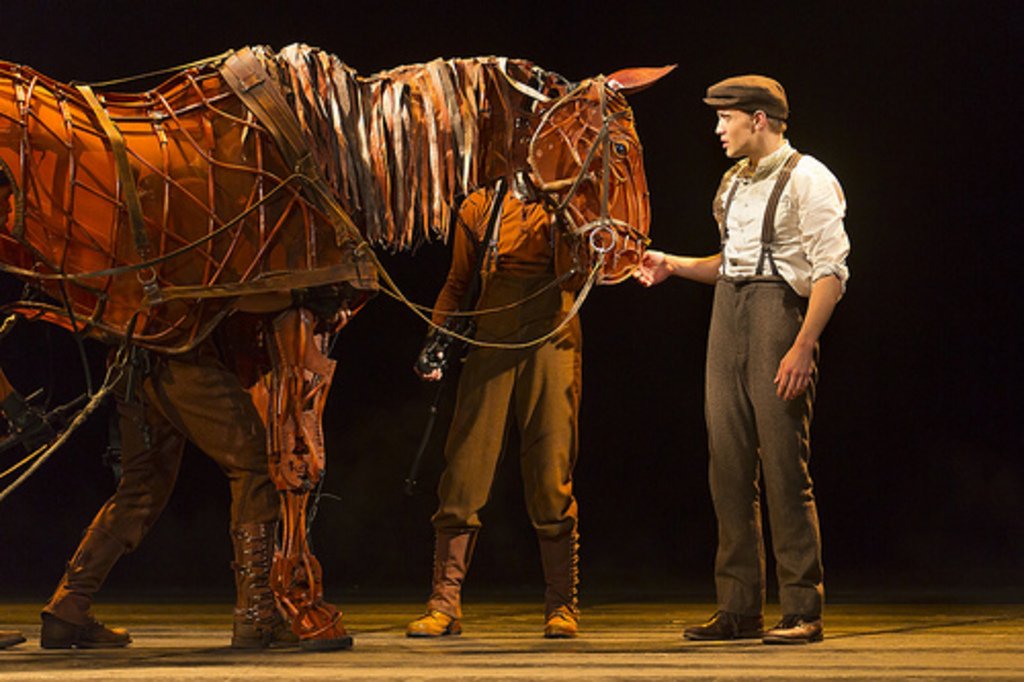 Joey’s ears melted my heart. The way they wiggled, twitched and turned with astonishing vitality—well, it was all I could do to remind myself that it was not a living, breathing animal on stage.

I thought that perhaps I would be disillusioned with the 120-lb-puppet. Instead, I fell desperately in love with the Handspring Puppet Company’s cane, aluminum and leather beast. Joey’s handlers, Danny Yoerges, Brian Robert Burns and Gregory Manley, bring him to life and then just as quickly fade unnoticed into the background.

Set against the brutality of World War I, War Horse tells the tale of a young boy, Albert, whose beloved horse Joey is enlisted in the army. Not yet old enough to serve, Albert (played by Andrew Veenstra) is devastated by the loss of his friend and ventures out to bring him back home. Veenstra’s performance is spectacular. He makes us believe in the innocent, magical bonds of friendship. He takes the audience on a roller coaster of emotions: the highs of love to the very pits of betrayal. While all the acting was superb, truly superb, it’s Lavita Shaurice (playing Emilie) who deserves a nod of recognition for her performance. Her role is small, but powerful, and the drama she brings to the stage proves that she’s an actress to watch.

If War Horse’s story is simple, the props and backdrop are even more so. But with massively complex (faux) horses on set, the simplicity of everything else is necessary and perfect.

Simple though it may be, the story is relatable and emotional. (I cried big, juicy, crocodile tears twice during the performance, and I’m not the only one who did.) Yes, it’s obviously a tale of love, friendship, courage and faith. But what surprised me was the realistic portrayal of war. The machine guns, tanks, barbed wire and explosions were done in-line with what is to be expected of a play of this caliber. What was unexpected, however, was the poignant expression of horror, death, brutality and loss that sometimes escape war scenes in stage performances. The innocence of the warhorses serves as a stark emotional foil to the brutality of combat. It’s this seeming incongruence that emphasizes humanity’s duality: the capability of inflicting immense pain and suffering versus choosing kindness and love.

The evening did have a slight hiccup as technical problems interrupted the performance. However, the actors resumed their roles and characters with such fluidity that it’s possible to believe that the interlude never happened. The chemistry shared on-stage was palpable and made for an even better performance.

It’s easy to understand why War Horse, written by Michael Morpurgo and adapted by Nick Stafford, has won five Tony Awards: it’s wonderful. It’s not just for children or adults or animal lovers or war veterans. War Horse is for everyone. This particular cast is spectacular and reintroduces audience members to their most innocent and pure selves. In a word, this play is fantastic, and you’d be a fool to miss it.