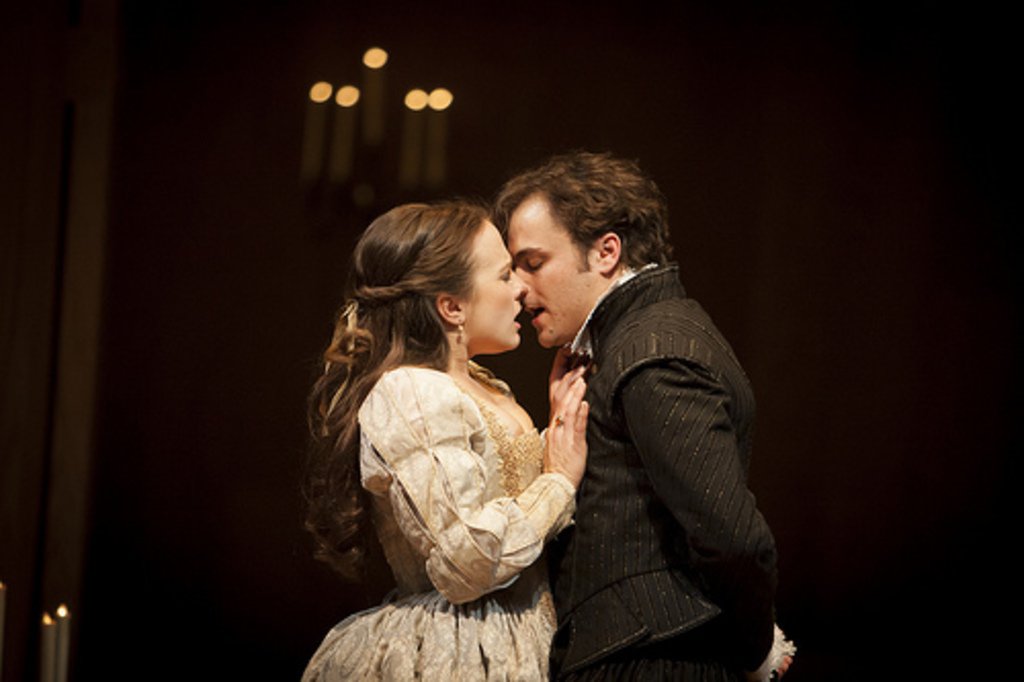 All photos courtesy of Denver Center for the Performing Arts.

Two star-crossed lovers are kept apart until Death intervenes. Think that sums up Shakespeare’s Romeo & Juliet? Think again. Yes, it’s been done before, and while we aren’t sure anyone can make us fall in love the way Claire and Leo did, the Denver Center for the Performing Arts has a cast that is willing to try. Yours truly won’t be privy to the show until Valentine’s Day, but luckily, Lenne Klingaman, Denver’s Juliet, was willing to give a sneak-peak into what it’s like to play one of literature’s most iconic characters.

A California native who now lives in LA, Klingaman has been an actress for 16 years and has played the role of Juliet three times. In the Denver production alone, she will act in about 40 shows—up to nine times a week. That’s a lot of “wherefore art thou Romeo”s. Far from jilted, this actress seems to be on top of her game and loves her Juliet all the more.

303 Magazine: What got you involved in theatre?

Lenne Klingaman: I was that kid who talked to herself in the mirror and did weird monologues. During my freshman year of high school, I decided to audition for Damn Yankees. I read from the monologue book, and I got cast. Since then I’ve pretty much always been in a play.

303: This is your third time playing Juliet. How do you keep your performances fresh?

LK: I’ve been different ages every time I’ve played her. The first time I was closer to her age, so each time it gets deeper and deeper.  As you get older, the playing of the youth gets easier because you are more removed from it. You get to know that you are an adult and can just dive into the kid part of the character. Juliet is kind of petulant and firy and that’s easier for me to dive into now. I feel more free to actually go there. Also, now I have many more years of experience with Shakespeare’s language. It just starts to feel more and more natural. I feel like I’ve really gotten to live in her language and how she thinks. This third time it feels like it’s really in my bones.

303: What’s it like to play such an iconic character?

LK: It is interesting, and because it’s my third time, there is a lot less pressure. My first time I just felt like I had to get it right. But each time I play it, I see more choices.I don’t think there is one right way to play her. Whoever my Romeo is dictates some things about my Juliet, and the director helps me to shape her. And this [production] is very simple and beautiful and is about the language—living in that world where the language is really what is given to the audience. I’m not really playing an iconic character, but rather what is in our production.

LK: I relate to how smart she is. She is stunning. She’s a 13 year old turning 14. I am always blown away by some piece of the text that I hear anew even after the third time playing her. She is kind of imprisoned> she’s not aloud the freedom to walk about. She’s sort of stuck in this Capulet household and can’t do anything. It’s why we’ve made her barefoot for most of the play. I don’t relate to that. But she must be a reader because she understand the world, and myth. I love that about her. I get to really relish in her language. Just the way she imagines, I can relate to that. I relate to the “Juliet Tantrum” [in the scene with the nurse]. What’s funny is that [in my life] I haven’t given myself permission for that passion with a loved one, which I so admire in her.  I really admire that when she feels something, she fully expresses it.

LK: It’s wonderful. We’ve gotten to work together at Shakespeare Santa Cruz. We just have a lot of respect for each other’s craft and classical language. Especially in LA, (where Pasternak also lives) there’s not a lot of respect for that. When you come across a kindred spirit it’s nice.

LK:  I’m working on a play in South Carolina by my mentors called Flight. It’s loosely based on the first women who flew airplanes.

Sound good to us. But first, let’s prepare ourselves for some high-end drama. Monague vs. Capulet style.