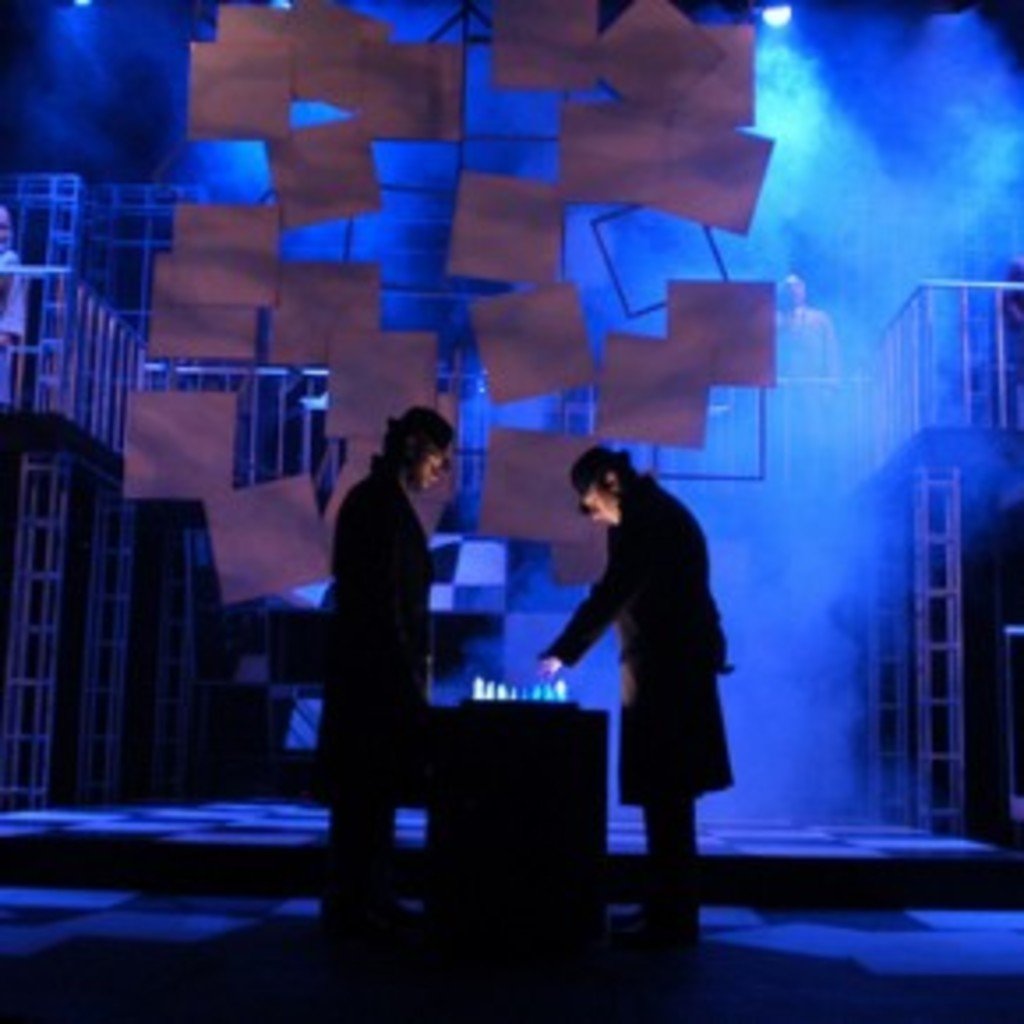 “Chess” is tactical, at times complicated, but rewarding

For those who play the game, chess is at times intense and overly complicated but in the end it is always rewarding and the same holds true for the Arvada Center production of Chess, the musical. This freshly renovated version of the musical, gutted of much of its satirical focus on the game of chess itself, now plays more like an old-fashioned love story, set against the backdrop of a tense chess competition.

The alterations by director Rod A. Lansberry, make this rather humorless musical, with problems that continue to come across icily, more enjoyable and understandable. The characters — originally created for a concept album — still seem to have been developed strictly as conveyances for the songs but in this rendition, you may find you actually care about these folks running around the beautifully crafted stage designed by Brian Mallgrave.

David Nehls and Kitty Skillman Hilsabeck together do a fantastic job of telling the story through music and movement. Nehls has crafted the show creating two very unique worlds, that of the Americans filled with rock and roll and the world of the Russians filled with a magnificent string quartet. Hilsabeck shows us the magnificence behind the game of chess, through modern choreography that puts pawn against pawn, queen against queen and most importantly king and against king. These human chess pieces move effortlessly while our leads play chess, and spin quietly in the center.
Tally Sessions plays the Russian competitor, Anatoly Sergievsky. His vocalizing throughout makes you happy to be alive. “Where I Want to Be” and his final duet with Florence (Lisa Karlin), “You and I,” he lets us hear his rich, natural gift.

Gregg Goodbrod, as the twisted American champ gets to deliver the exquisite “Pity the Child,” which he does with a wonderful lack of sentimentality and an intensely bitter streak.

The role of The Arbiter, the show’s narrator, is complex, opening the show with the “Story of Chess” and weaving his way throughout the plot offering small tidbits of knowledge. Sydney James Harcourt plays the role with great style, stealing moments from the audience with not only his immense talent but impressively sculpted abs; however the act two opener, “One Night in Bangkok” might give him a run for his money when all the male ensemble display their remarkable physiques.

Karlin gives and gives and gives some more as Florence, the woman who betrays one love for another and spends the rest of her time wondering why. Her “Heaven Help My Heart” holds true powerlessness, but by the final curtain, the gutsiness of her approach will destroy you.

Megan Van De Hay is Svetlana, the wronged wife, a typically smaller role, but in Lansberry’s production, she is gives you just a tease at first but gives you everything you want and more during her rendition of “Someone Else’s Story.”

On the flipside of things, Stephen Day, a genuinely kind and inspiring actor, plays the quintessential hated character of Alexander Molokov. He takes you all over the map, and his deep bass resonates in the theatre. You want to hate him but just when you’ve settled on it, he gives you a soft moment. Day plays this roller coaster of a character wonderfully.

Chess, the musical may not be for dummies or those that find themselves easily distracted but if you tough it out, the Arvada Center production will show you just what a winner this musical can become.