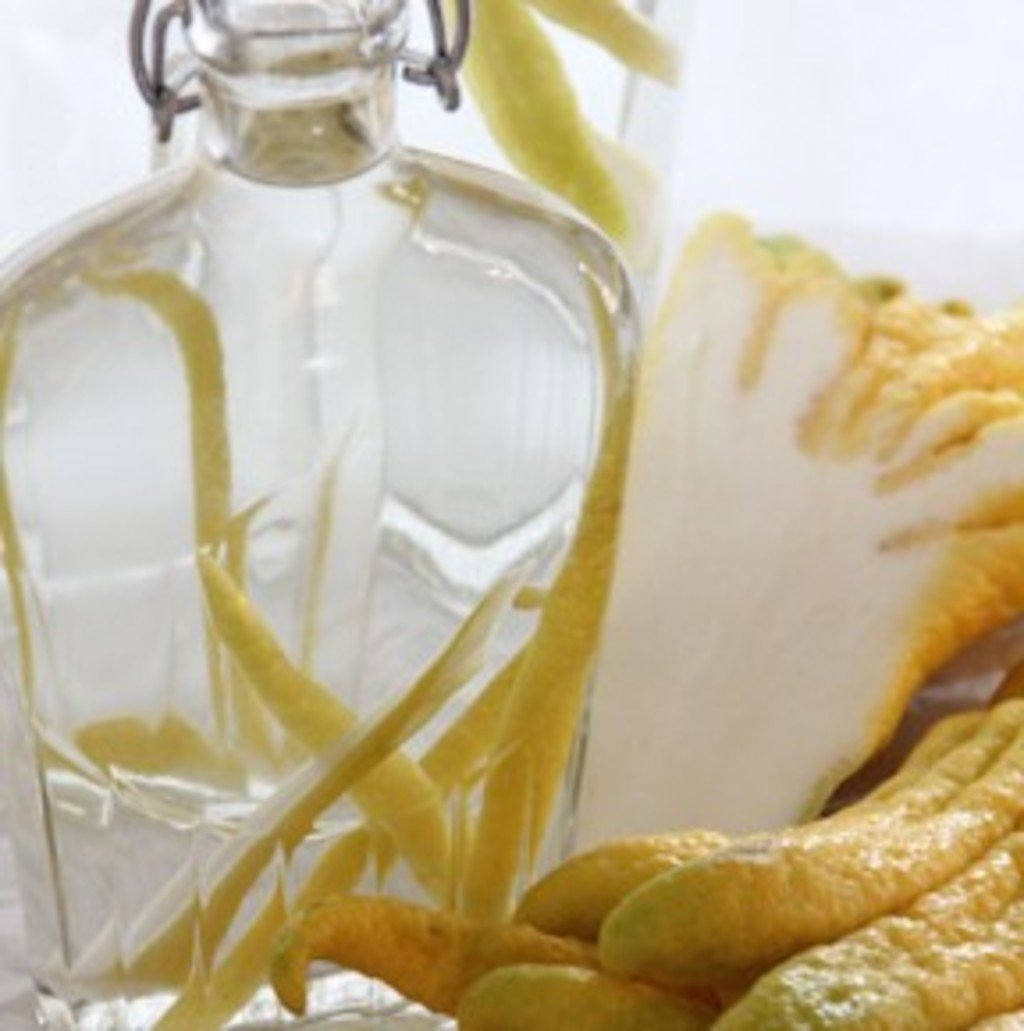 What is yellow and green, has more than five fingers, was likely born in Asia, smells like lemon heaven and makes a rare appearance in early winter? No. It’s not Godzilla. It’s the Buddha’s Hand citron.

This gnarly sci-fi looking claw is the ‘citron’ used in making citron vodka. It’s a member of the citrus family but it has no juice or seeds. It’s all white pith on the inside with an intoxicatingly fragrant rind. And it’s available now.

Last Christmas, Mark and I were on the hunt in Whole Foods looking for something funky to photograph. We spotted the Buddha’s Hand citron but we didn’t buy any that night, partly because they are expensive ($4.99 a pound), and partly because I didn’t know what to do with them. A little research revealed that this obscure fruit is used to make citron vodka and that citron vodka is quite easy to make at home. At home, you say? That sounds like a project worth trying.

Buddha’s Hand also be candied, used for making citron syrup, citron salt, or just rubbed all over your body because it smells so damn good. These projects sounded easy to do and I was ready to pick some up and give it a try. By the time I returned to make my investment, my window of opportunity had closed. The season for Buddha’s hand was over. It’s a short season – typically November through January. I was crushed because now I had to wait a year.

We were ready this year, though.

Just before Christmas, Mark spotted them in Whole Foods and called me so I could race to the store and pick them up before they disappeared. Eleven dollars later, I had two beautiful specimen and was ready to experiment (it helps that the Buddha’s hand lasted for weeks in my fridge while I figured out what to do with them).

The first I thing I did was remove a finger and rub it all over my neck. Kinky, I know, but it was just like dabbing myself with a uniquely fragrant lemon perfume. It even has a soapy aroma to it, so it was clean kinky, at least.

The experiments were a success resulting in several bottles of citron vodka to give as gifts, lemon syrup and candied citron zest in the pantry. The hands are larger than life and I didn’t use them all up.

Here are some other recipes found on the Web.

Citron vodka is incredibly easy to make. All you need is the Buddha’s Hand (Whole Foods), inexpensive vodka, and glass bottles (Cost Plus World Market). If you want to give the citron vodka as gifts, look for smaller bottles than the ones I found. Also, look for bottles with air tight lids.

It is said that the Buddha’s Hand citron symbolizes happiness and long life. So I figure we can create a little happiness with some Citron Vodka

DIRECTIONS
Clean the fruit by scrubbing under warm soapy water to remove any dirt, wax or chemicals and then dry completely. It helps to rough up the rind a bit to help release the aromatic oils.

Remove a few fingers from the Buddha’s hand and slice lengthwise so they easily fit through the neck of your bottle.

Fill the prepped bottles with your inexpensive vodka, and slide in a 3-4 slices of citron. Seal and let sit at least a week, if not longer.

The objective is to slowly simmer the citron in syrup, over a period of time, until it becomes completely translucent and candied. Your patience, and the size of your citrus slices, will determine how long this takes. In my experiment, I let my syrup simmer for 60 minutes at a time, then allowed it to cool and sit overnight while it soaks up the syrup, then repeat for a week until the syrup is reduced by 75% or until thick. There’s no harm in letting it sit and soak. The syrup may crystallize. Just add a little more water, then reheat.

DIRECTIONS
Clean the fruit by scrubbing under warm soapy water to remove any dirt, wax or chemicals and then dry completely. It helps to rough up the rind a bit to help release the aromatic oils.

Cut the hand into its individual fingers. Cut away excess inner pith. Slice each finger in half, then julienne.

In a 2 quart saucepan, combine the water, sugar and citron julienne. Bring to a simmer over medium heat. Turn heat to low and allow to simmer until pith becomes translucent, at least 60 minutes.

Turn off the heat and allow syrup to sit overnight, covered. Simmer again the following day. Repeat until you get the desired texture and syrup is reduced by 75% or quite thick. If you reduce the syrup too much, add a little water and reheat.

Drain and reserve the syrup for use in cocktails, desserts, etc.

Transfer the julienned strips to parchment paper to dry. Exposure to air will result in crystallization of the sugar. You may also toss them in powdered sugar or superfine baker’s sugar. Store in an airtight container.

Patricia Bainter is a blogger and writer for 303magazine. She trained at Le Cordon Bleu London and shares her culinary musings and recipes at her own website ThePatricianPalette.com. Photos by Patricia Bainter and Mark Woolcott Photography, www.markwoolcottphotography.com.