All photography by Carlos Escamilla

When you hear the term “nomadic art museum,” you may not know what to expect but you typically wouldn’t expect any kind of permanence. That’s why it was slightly shocking to learn that Black Cube Nomadic Museum would open a fixed headquarters. But on September 14, that’s exactly what happened with the “BCHQ Bash,” a celebration of its official headquarters location in Englewood.

After Black Cube’s founder, Laura Merage, found studio space in the building, the organization realized that they needed storage. In fact, many of the tools and necessary whatnots for the nomadic museum were in chief curator Cortney Lane Stell’s garage. The need for storage combined with the subsequent openness of the warehouse space prompted the Black Cube team to create a flex space.

“We’ve done some programs and events here, but I wanted to more formally dub the space and produce a really experimental exhibition,” said Stell. 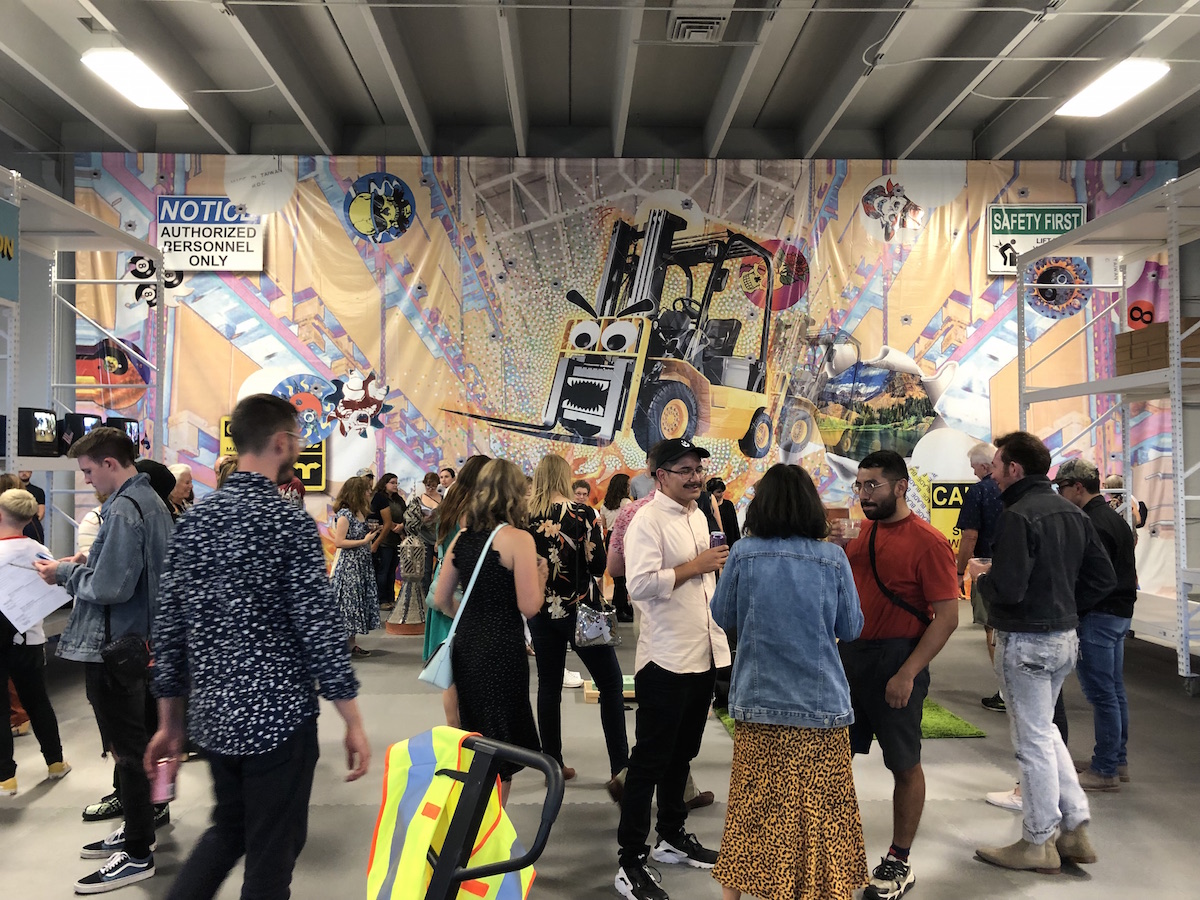 In the background is “Take This Job and Shove It!” by Zach Reini.

The location itself is worth mentioning. Nestled in the warehouse district that’s just north of Dartmouth between Federal and I-25, it’s not a place one would expect an organization like Black Cube to be, but it works – especially once you step inside. While the building is a standard, run-of-the-mill warehouse, its internal activity makes you instantly aware that it’s an artistic space.

Honestly, even walking up to it on the evening of the 14th, it was obvious. A performance piece on the ramp, a unique inflatable seating area outside, the What Would Cheesus Do food truck and the kind of crowd that only an art opening attracts – I’m sure the neighbors were thinking one of two things. Either, “Well, that’s different,” or “there goes the neighborhood.”

Those sentiments would have been appropriate for a few reasons. They sum up, albeit incompletely, the legacy of Black Cube and the installations it’s been introducing to unsuspecting neighborhoods since 2015. Additionally, it probably wouldn’t be much of a stretch to expect that not one installation has been met with unilateral agreement on its meaning, especially by the community. Finally, with the group exhibition curated by Stell, we get a commentary on the current functionality of warehouses in the digital age. 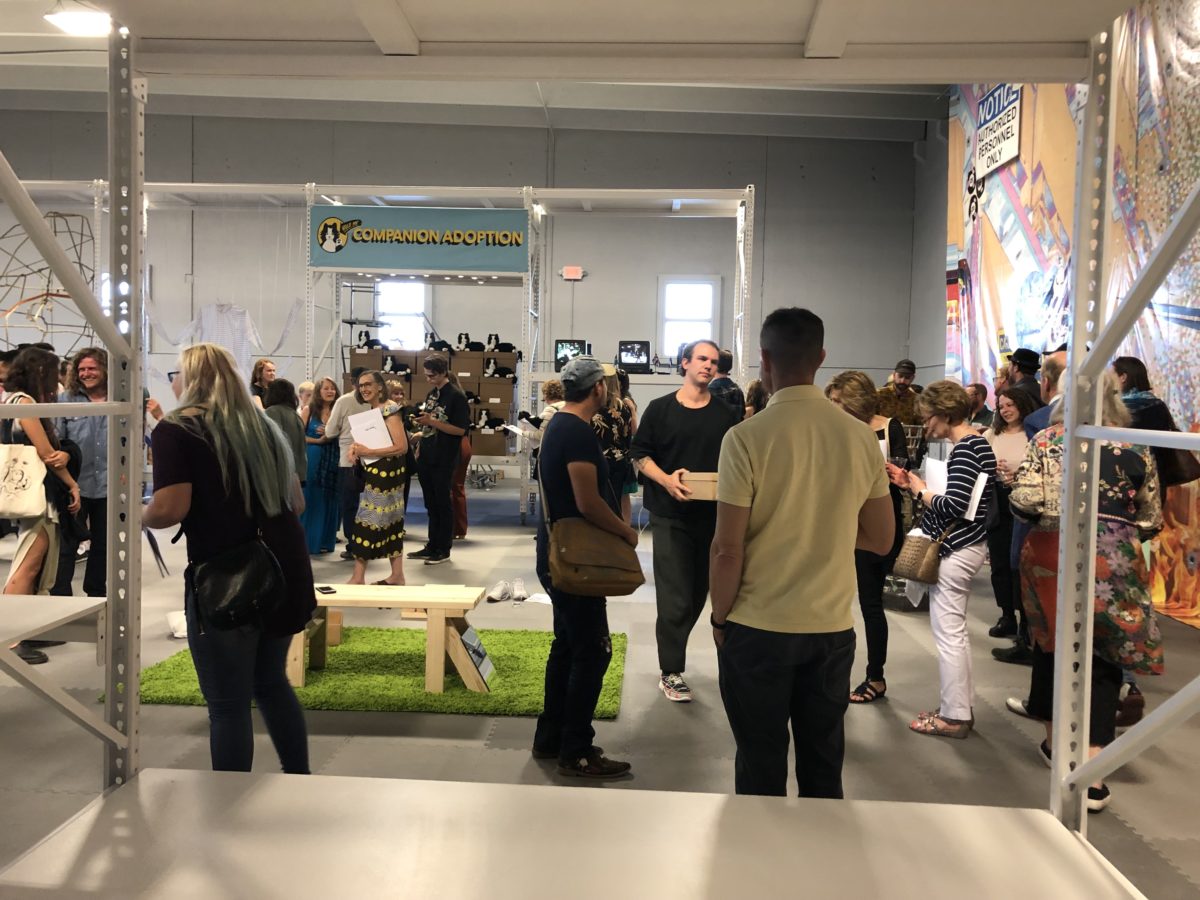 The Fulfillment Center is that exhibition and it showcases more than a message — it showcases the vibrancy and evolution that have come to define Denver’s art scene over the past few years. It does this by maintaining a sense of humor while simultaneously demonstrating a DIY-ness that is polished and well thought out. Every inch of the vast Black Cube headquarters was expertly curated so that you’re never looking at any piece from the same angle twice. But more than that, it signifies what seems to be an exciting moment for Stell. 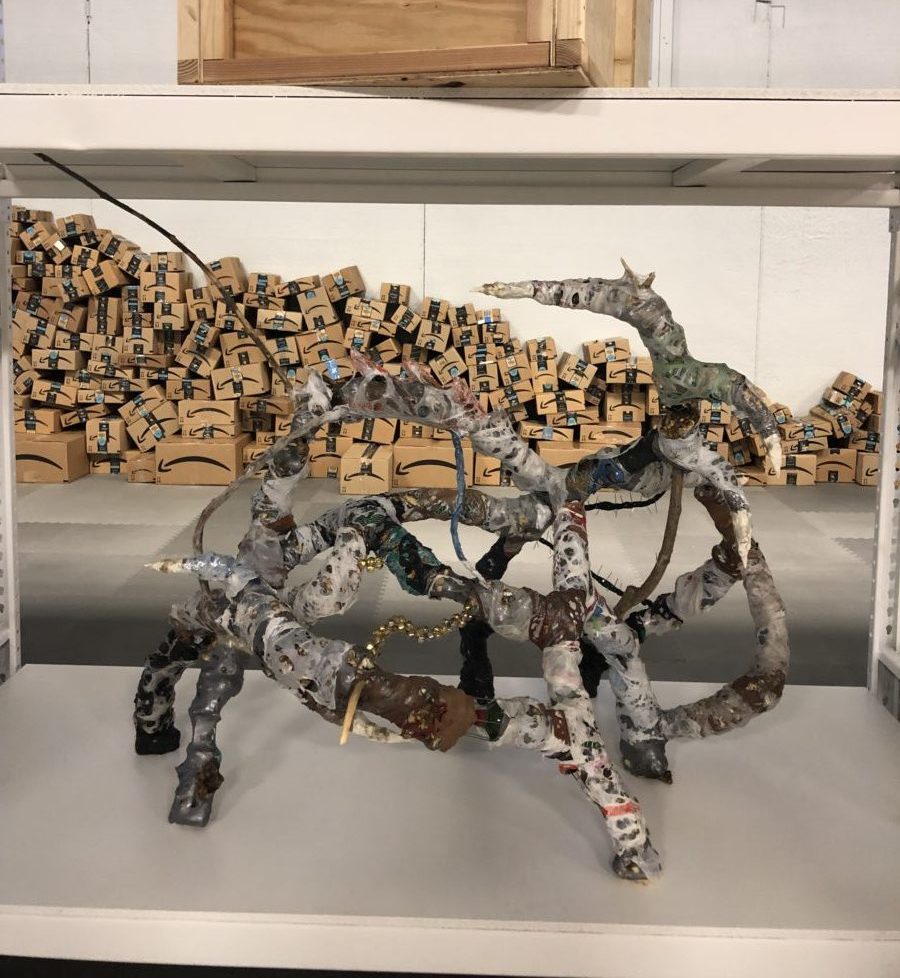 According to Stell, when Black Cube started, there was a purity to its conception: an artist has an idea and Black Cube helps them realize it. However, it turned out to not be so simple. Language barriers, legal barriers or site constraints mean that installations may take much longer than anticipated, making everything feel inefficient. This new space and its accompanying exhibition symbolize Black Cube’s attempt to remedy that.

“This flex space won’t always be exhibition space; we’ll produce art here at times, we’ll have different programs, it’ll be our office at times. It’s a big resource to be more experimental and it’s like having an additional tool,” said Stell.

“Experimental” is a great way to describe the exhibition. Its occupation of the warehouse space makes the show unique and alludes to the challenge that Stell faced when she first decided to curate The Fulfillment Center. That challenge relates to “Black Cube” as a concept rather than just a name. 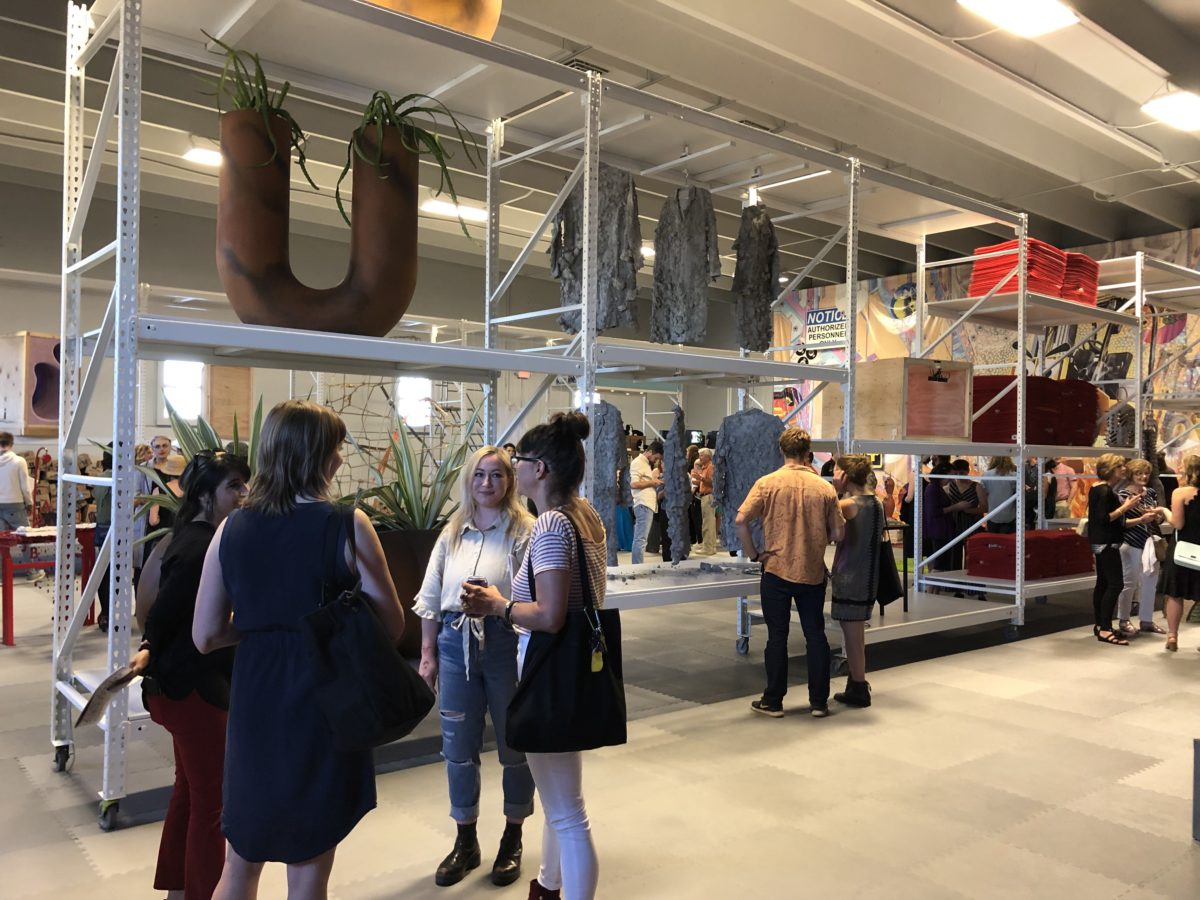 The term “white cube” refers to a space like a gallery or a museum, it’s a direct reference to the white walls on which art hangs or in which a sculpture sits. When art is housed or displayed in a white cube, it’s taken out of its contextual space so that it can be experienced in a “pure” way.

“That’s great and wonderful, but it’s become a homogenized experience for art. Everywhere around the world it’s how you expect to see it,” said Stell. “We think that by showing art in the location that resonates with the artwork, it’ll help audiences relate to artwork in different ways.”

The spectral opposite of the white cube is the black cube, but how do you make a static space a black cube? One way is to look at where and what that space is. Since they now have an open warehouse space, Stell wanted to introduce the headquarters with a strong gesture that grouped the warehouse with the exhibition, a move that prompted her to look at the role and function of warehouses today. 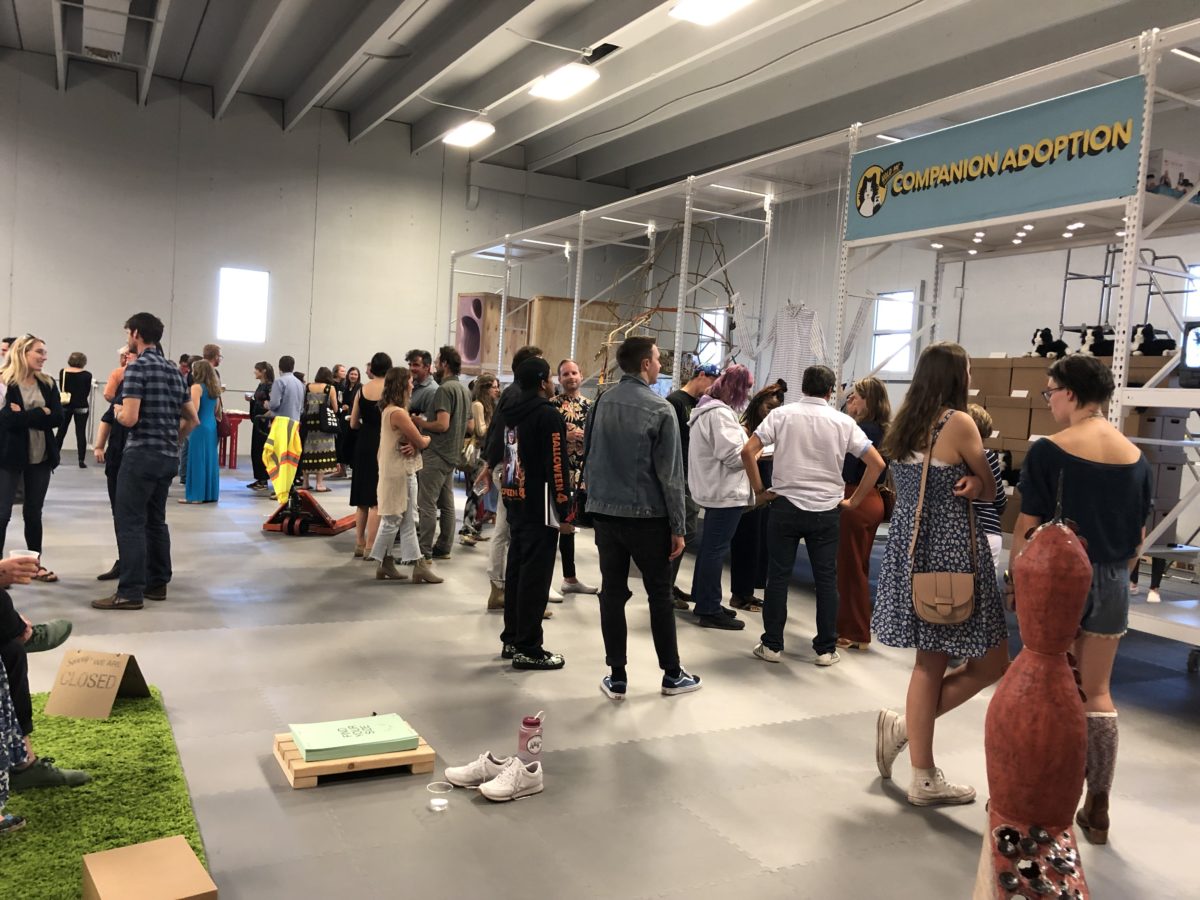 “Starting from that point and then from doing a bunch of research, I realized how much eCommerce has changed the power systems in our entire world,” said Stell. “I felt like it was a really important moment to have artists speak about it instead of us just using our computers like desire machines all the time.”

So Stell started with the pallet racking structures that support and display the majority of the artwork. The structures are on wheels to reflect the mobile modularity that defines modern warehouse spaces. The placement of the art and the structures’ division create the sense of a warehouse without feeling too literal. Meanwhile, a QR code identifies each piece instead of the standard labels, which feels like another deliberate nod to the digital economy, or maybe to IKEA. The only thing missing is the ability to “check out” the artwork or get two-day delivery. In addition to the black cube concept, it was important to Stell that the vision of Black Cube is reflected in who she invited to participate and how the relationships with the artists were formed. 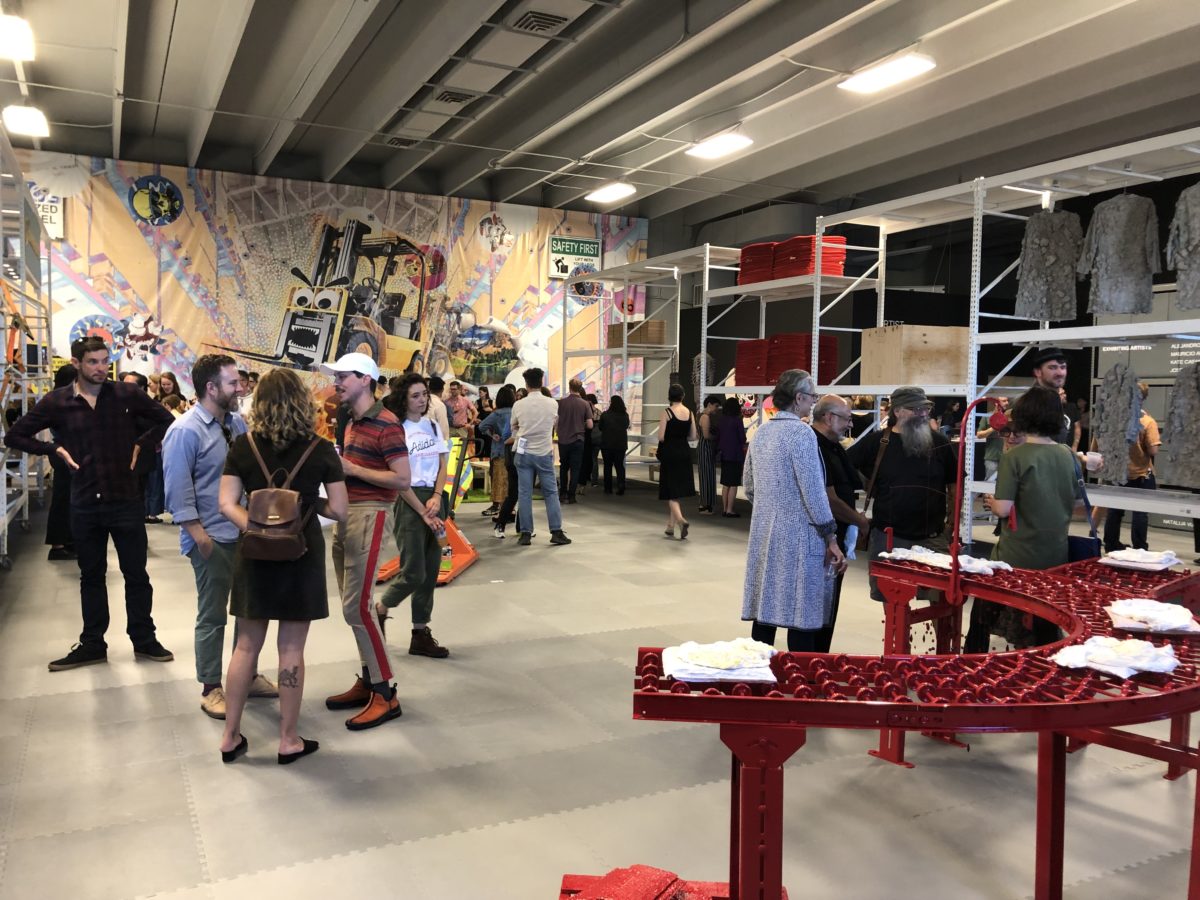 “The other really important thing about Black Cube is we really try to have an ethical relationship with artists,” said Stell. “We wanted to fund the production of new artwork. In all of my exhibitions, I try to layer local, national and international artists to create exchange, relationships, flow, dynamics and diverse ideas. So I knew that I wanted to do all of that and I also knew that I wanted to have diversity as far as ethnicity, gender and age.”

All of the artists featured in The Fulfillment Center attended the opening, which is quite a feat considering that only about half of them were locals. Artists from as far away as Montenegro and Mexico City have work in the exhibition, as do artists from five US American cities including Denver. That spacial distance lends an interesting perspective to the spatiality of the exhibit as a whole. The globalization of the digital age means that we’re all affected by its unique form of consumerism no matter where we live. That’s more evident as people become aware of the aforementioned power structures and the investigations into the ethics of large companies like Apple and Amazon.

As you walk around the new Black Cube headquarters and imbibe the intended message of each artist, you become more aware of the title of the exhibition and its implications for our current and future selves. Do we feel fulfilled? What even is fulfillment in the digital age? 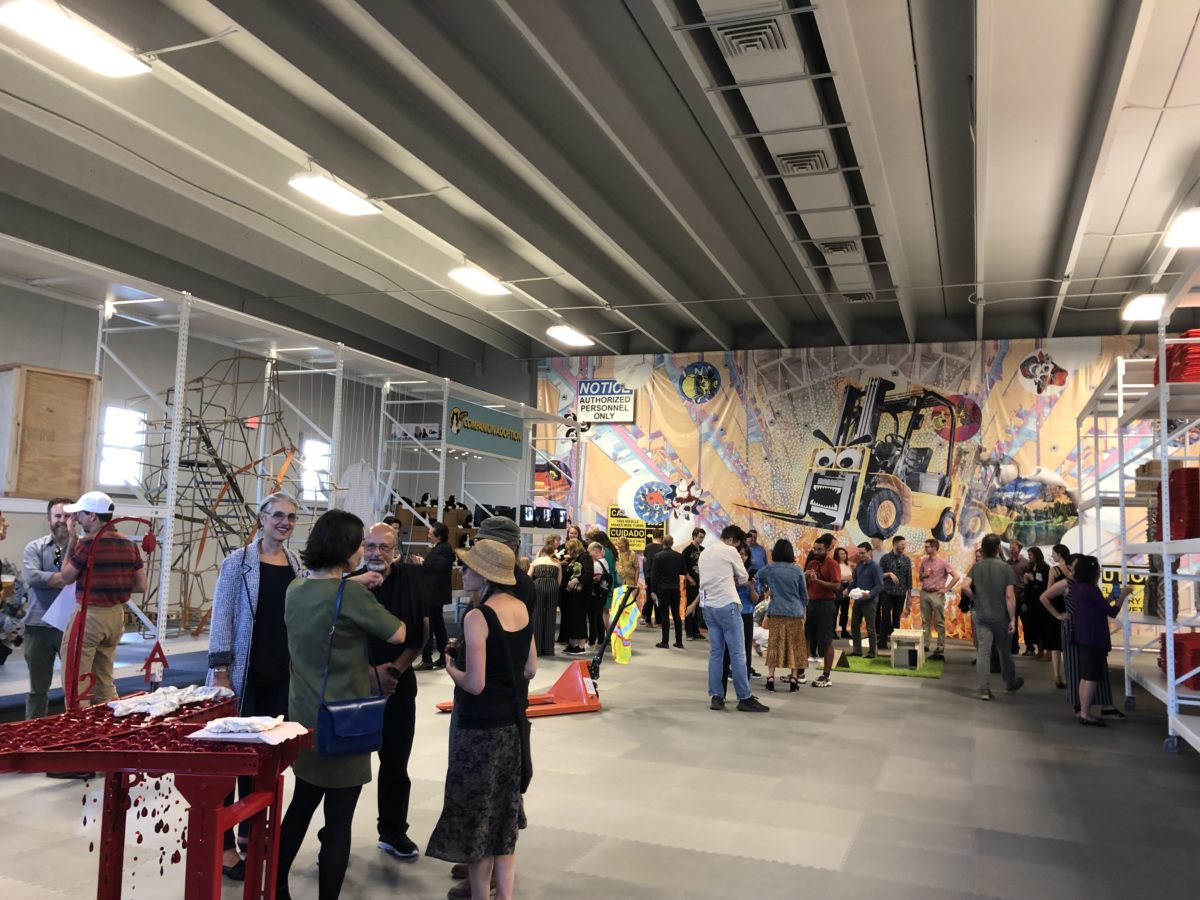 The Fulfillment Center is on display until December 7, 2019, at the Black Cube Headquarters, which is located at 2925 S. Umatilla St, Englewood, CO.

All photography by Carlos Escamilla