With her pink sparkly wings attached to her black converse and her white helmet, Sydney Kennett can fly. With the help of 100 miles per hour winds, that is.

But for a girl that doesn’t mind flying 40 feet up in the air, she is actually afraid of heights. She tells a story about how she visited the New York for an indoor skydiving competition and went to visit the Empire State Building in New York. She didn’t enjoy herself. “We went up and I didn’t really look out the windows at all,” said Sydney.

When she’s flying, the heights don’t scare her. “I can float and I know I’m not going to fall,” she said. 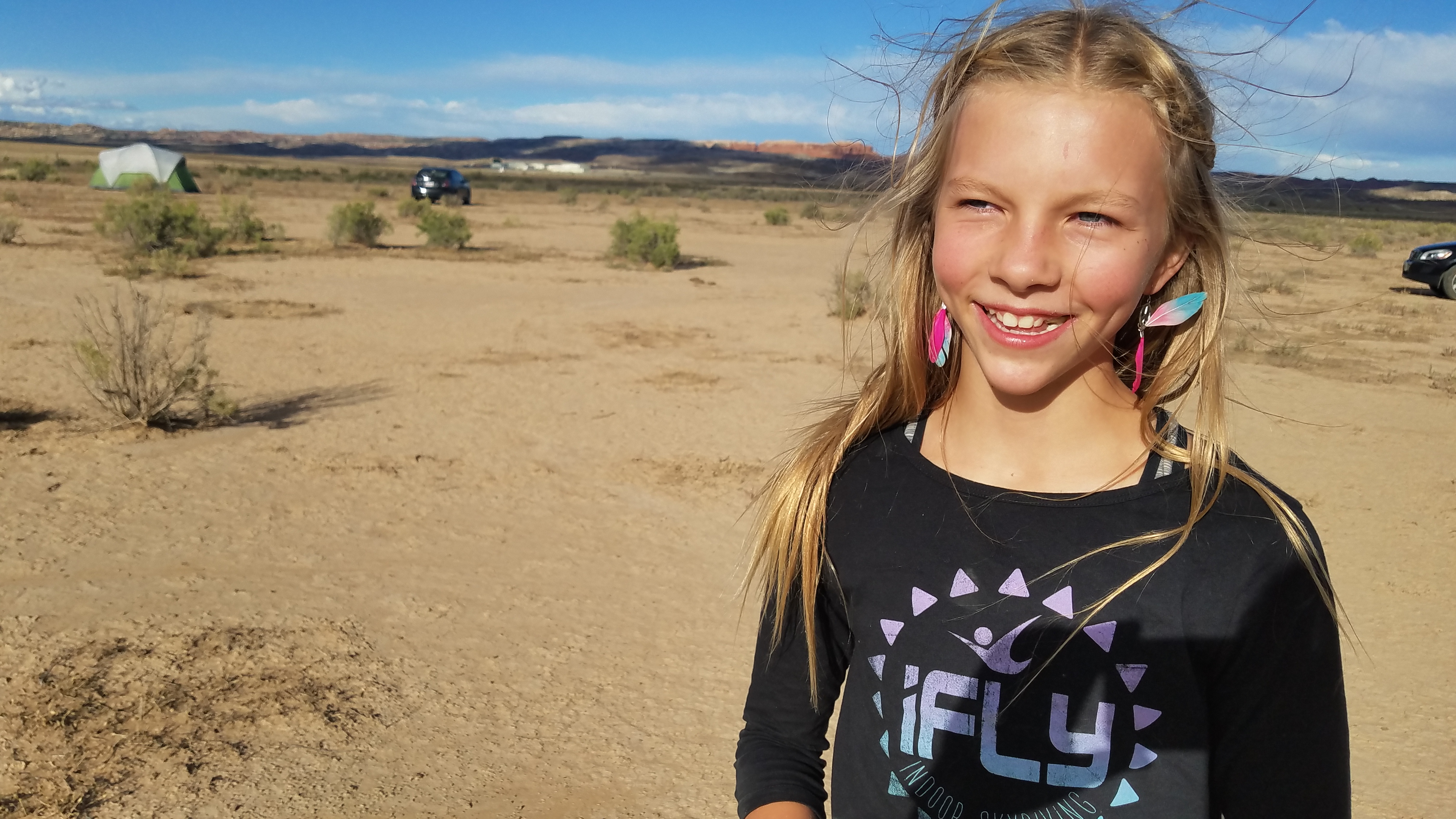 Indoor skydiving is the only sport Sydney has tried that she actually truly enjoys. Before finding her passion for flying, Kennett tried competitive gymnastics, ice skating, swimming and a few other sports, but nothing stuck. Kennett first tried indoor skydiving when she was four years old and her dad, Andrew Kennett, took her, her sister Riley, and one of their friends to a tunnel. She didn’t get into a tunnel again until she was 8 years old and she latched on to the love for the sport. “I really liked it so we started doing this thing call Kid’s Club and it was really fun,” said Kennett.

Kid’s Club is now called Flight School, but it taught Sydney how to fly. It was once a week for five minutes, but kids were able to work on their skills and progress from week to week. “It’s not like coming in and one flight and leaving,” said Michelle. “It’s actually a group of kids and that’s how [Sydney] started. It progressed from there that she really liked it and she kind of outgrew Kid’s Club a little bit.”

Sydney ended up outgrowing Kid’s Club because she was excelling so quickly. It’s been seven years since her initial introduction to indoor skydiving, but only two years and a half years since she became serious about the sport. Now, she’s traveling to different cities and countries for competitions.

“We really didn’t see what was going to happen when she started flying and a year into it we’re traveling to all of these places,” said Andrew. “It’s pretty crazy how fast she progressed and the timing of the sport growing is ideal so it was the perfect storm from that perspective. Last year alone we went to something like 10 cities.”

Sydney’s favorite place indoor skydiving has taken her is to Spain, where she participated in a camp taught by Inka Tiitto, a professional indoor skydiver and one of the best freestyle fliers in the world, along with the Leo Volkov, the freestyle world champion. “She’s sort of like the Michael Jordan of flying from a freestyle perspective,” said Andrew of Tiitto.

In the summer of 2017, Tiitto asked for young freestyle fliers to join her in Madrid for her Superheroes’ Flying Camp. Most of the spots were already filled for the camp, but Tiitto was still looking for two more fliers, and Sydney was chosen. “We knew that there were a lot of kids to choose from, so it was an honor to have Inka Tiitto pick Sydney,” said Michelle.  “Sydney could not believe it, being picked by one of her idols was just amazing.”

In addition to the camp, they were also filming a documentary about the kids participating in the camp and on being tunnel fliers, so Sydney had camera crews following her around the entire week. “[Being filmed] was cool but I didn’t really like that though because I’m shy,” said Kennett, who is very shy upon first meeting her. But she comes out of her shell once she’s in the tunnel.

“As soon as Syd is in the tunnel, she lights up and becomes her tunnel ‘persona,’” said Mike Silva, Sydney’s flying coach. “She is confident, powerful and graceful. It’s her comfortable place.”

Silva has been Sydney’s coach for the last year and they connected at iFly Denver. He is a world record holder in both tunnel and skydiving and has now started judging competitions. “The two of them hit it off really well,” said Michelle. “He’s a wealth of knowledge as well. Just world class.”

“I love working with Mikey,” said Sydney. “He makes learning fun and really challenges me to the fullest. He knows so much about the sport and all its disciplines and I learn something new every time I fly with Mikey.”

Silva has seen Sydney grow in the year he’s been coaching her and has seen her talents greatly improve. “Across the board, her ability to fly in all disciplines has skyrocketed,” said Silva. “She can fly in some of the best in the world.”

But the tunnel isn’t the only place Silva has seen Sydney improve. He said she has become more confident outside of the tunnel with interviews and meeting new people from all over the world. “For her, the tunnel is helping her grow up and learn to communicate well with others,” explained Silva. 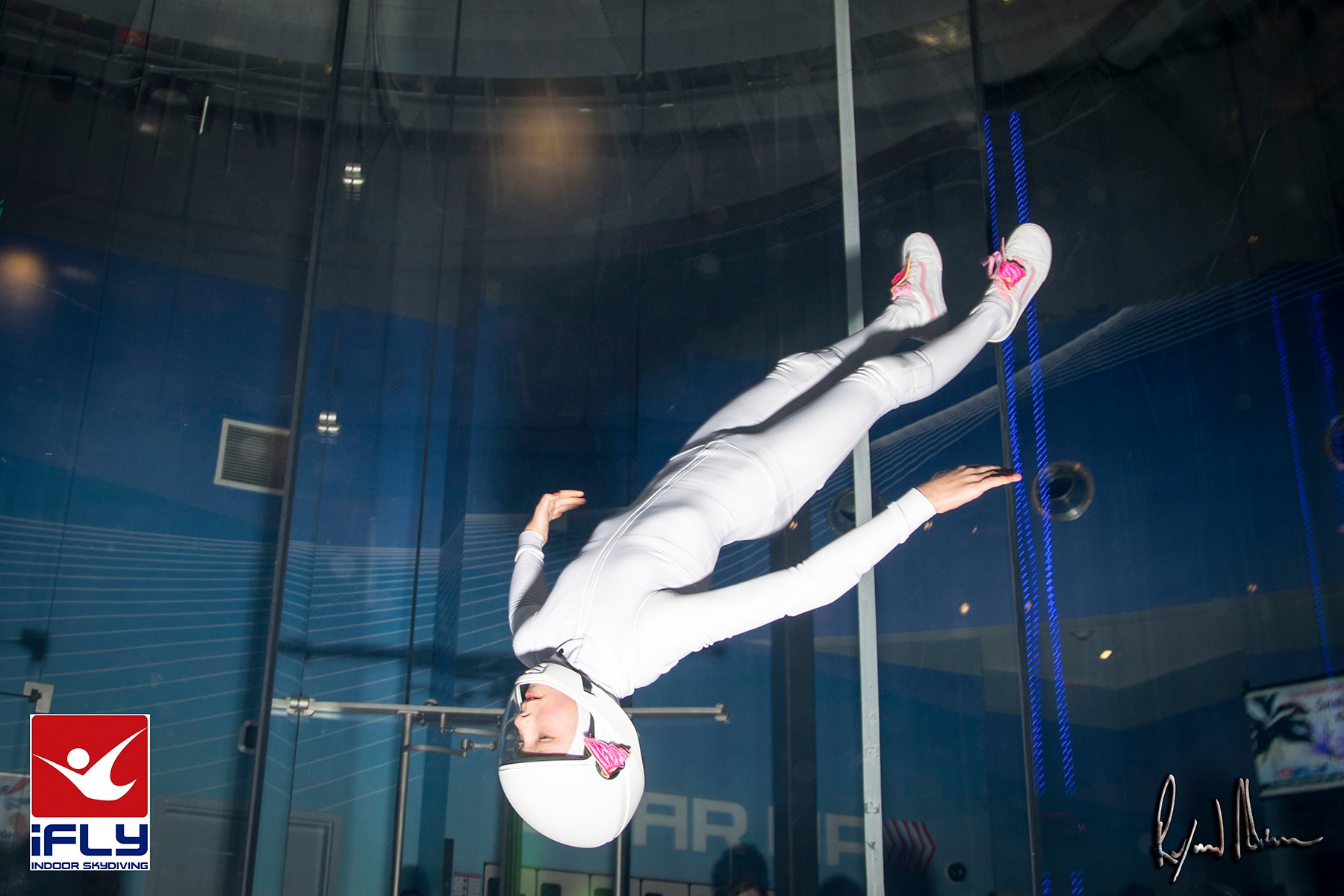 Like all sports, indoor skydiving takes a lot of practice, especially when preparing for competitions. First comes creating a dive pool, or a pattern of how you’re going to fly and you walk it out on the ground, outside of the tunnel, AKA dirt diving. You dirt dive by walking around with your index and middle fingers up, imagining your fingers are your body flying throughout the tunnel.

“It’s a lot of mental visualization,” said Andrew, who explained that when going to a competition, you’ll see a lot of people dirt diving with their eyes closed visualizing their routines. “It’s not exactly cheap to fly, so you have to practice [dirt diving] quite a bit to get good at it,” said Andrew

Sydney has placed first in seven national competitions. She was also a top scorer in one international competition, the Global Kids Challenge, where she competed against flyers from all over the world while flying in her home tunnel at iFly Denver. In the competitions that she didn’t place first in, she still places among the top spots. “I think the most important thing that separates her from other flyers her age is that she is a multi-disciplined flyer that can compete in a variety of different events,” said Silva. “Most tunnel flyers can only fly one style/event but Sydney is well trained in all areas of body flight.”

Sydney’s favorite dynamic is freestyle flying. There are three rounds of freestyle flying and in one round, there are three moves you have to complete in your routine, but the other two are free rein. “It kind of lets them show their personality,” explained Michelle. “They can be creative and make up a new move.”

While a freestyle routine can be whatever Sydney wants, she still sets up a routine and practices it before a competition but she has made up new moves in the middle of a competition. “Everybody goes into it with their preset routine and it doesn’t have to be perfect,” said Andrew. “You can adjust on the fly.”

Sydney competes with a couple different people in VFS and dynamic, but her dynamic flying partner is Naya Dixon, but Dixon doesn’t compete in VFS. Sydney and Dixon, together known as the Shred Sisters, met last year at a flying camp in Chicago and really hit it off. Sydney often travels to Oceanside, California, where Dixon lives, to train with her for upcoming competitions. Sydney heads to Oceanside at least once a month on weekends, a couple months before a competition, to train with Dixon where they would fly together on Fridays, Saturdays and Sundays and then Sydney heads back home to Colorado when she’s finished flying on Sundays. When she’s not with Naya, she’s at iFly Denver learning the basics with Silva and then when she meets up with Dixon and they put everything together to create a solid routine.

The Shred Sisters are the youngest all-girls team to compete in dynamic competitions and one of the best. There are a couple of other young teams, but most of the time, they are competing against adult flyers. “It’s pretty crazy because they don’t live near each other,” said Andrew. “They flew [together] in December at their first competition and they placed in the middle of the pack against all teams that are flying [together] all the time,” Andrew explained how mentally challenging dynamic flying is because there is so much to remember since all the moves are already set and required. “You see adults mess up all the time that fly a lot,” Andrew said.

Flying has created another family for the Kennetts. It leads them to meet people they wouldn’t usually meet and create bonds that will last a lifetime. Both Michelle and Andrew explained that all of the instructors at iFly Denver are like Sydney’s big brothers and have been around since she walked through the door.

On Wednesday nights, iFly Denver hosts VFS league nights where Sydney usually gets time to practice her moves while also being part of little competitions. Michelle explained that it’s usually the same people that go to league nights and everyone knows everyone. “It’s just really fun to know people you probably would have never crossed paths within a different situation,” said Michelle.

“You get all walks of life and it’s really a family sport from that perspective,” said Andrew. “That’s what I wanted to introduce to [my kids]. That’s why I brought her here and that’s what it turned into.” 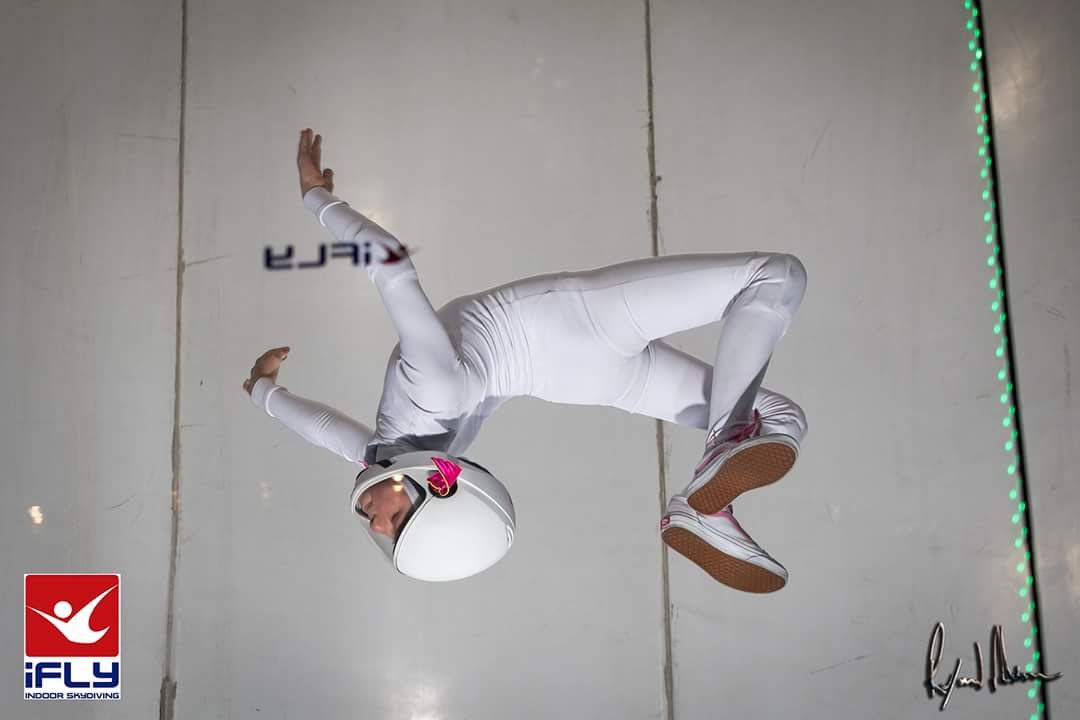