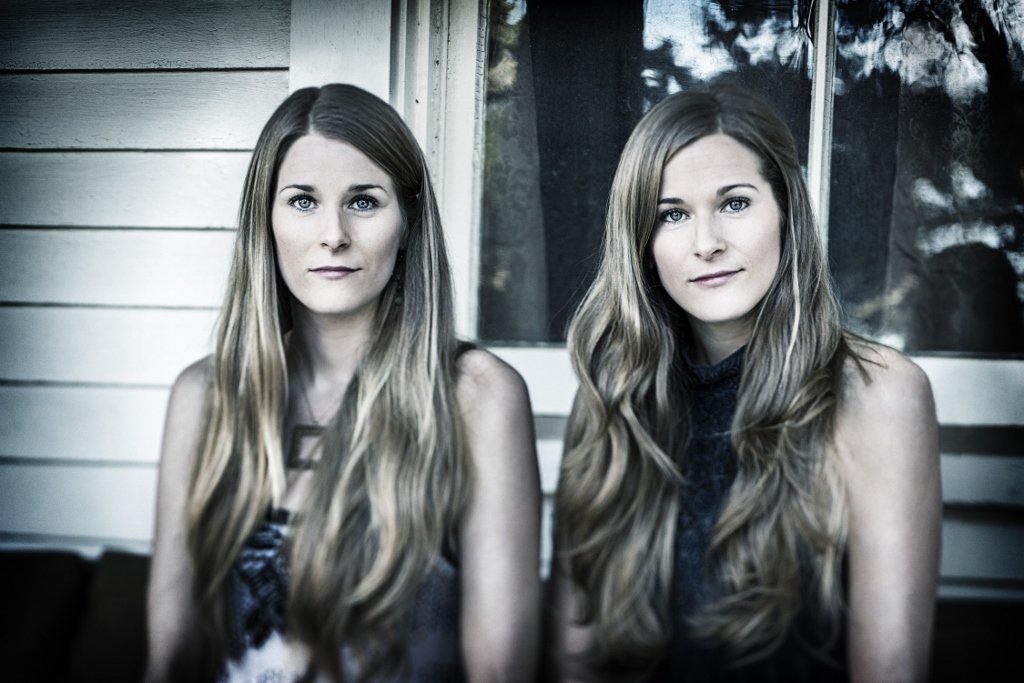 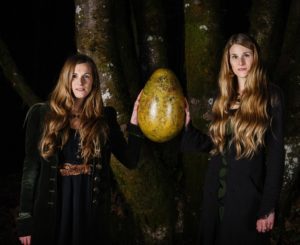 With voices of angels, quirky senses of humor and a wise energy, the Shook Twins take folk music from heaven to hell, through floods and fires to dreamlike syncopation with uncompromising calmness.

The Portland-based singers, Katelyn and Laurie Shook, are small town gals from Sandpoint, ID, with an aptitude for tapping into the divine. Pulling from their own cache of positive forces, combined with a mystical, giant, golden egg Laurie Shook converted into an instrument and plays on stage, the sisters have been carefully cultivating their space in the folk music scene for 10 years. Their affinity for the supernatural keeps the Shooks grounded and grateful and via a phone interview with Katelyn, it became apparent they are two of the realest ladies in music.

Their latest album, What We Do, was released in April and dons a refined, matured sound while still capturing the playful quirkiness they are known for. Sticking to the roots of folk, the album tells a collection of stories, but also ignites a renewed sense of wonder.  Recorded just outside of Seattle at Bear Creek Studios, the band had the chance to stay at the studio and record uninterrupted—a bonding experience that solidified the group, according to Shook.

The Shook Twins will be sweeping the stage alongside The Steel Wheels at the Fox Theater in Boulder, CO on Wednesday, June 4. Their live shows tend to feature an impressive array of instrumentation, including anything from the traditional banjo, guitar, mandolin variety to Laurie’s exclusive beat boxing and Katelyn’s re-purposed telephone microphone.

If you can’t catch the magnificent duo and their band this time around, they will be playing two Colorado festivals this summer: 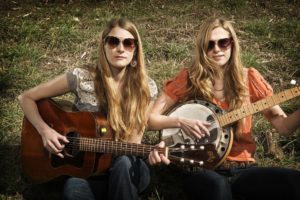 Interview with Katelyn Shook: Growing up Idaho, Magic and Bro-ing out.

303: It’s not everyday you meet a band—or anyone for that matter—from Idaho. What was it like growing up there and how has it—if at all—influenced your music?

Katelyn: It’s definitely influenced us, as least in the beginning. Growing up, our first songs were definitely nature influenced. There’s a big lake right there, mountains everywhere. We were outdoors kids, so there were a lot of nature references in our early album and songs. Really supportive family and a really great town to grow up in. It’s really small. Our whole town is about 5,000-10,000 people depending on the season. So starting out it was kind of … At that time there was only two or three serious bands there which is actually quite a bit for such a small town. So we were big fish in a small pond.  We toured out there for awhile and then realized it was a little bit of a rough spot to be and do the west coast stuff we wanted to do. So we moved to the city. We have the best of both worlds now. We can still go home there and be quaint or we can go to our home in Portland.

303: What drew you to Portland when you decided to branch out? Why not L.A or Seattle?

Katelyn: We wanted to go to a city but not a city that would be too overwhelming for such small town gals. We had played there a couple of times on tours before we moved there and it always just felt—you know how you go to a place and you just get this feeling like, “oh, I belong here,”—and I always got that vibe. The music scene is just so great there.

I would never want to go to L.A just because it’s too much there. I wanted a city where I knew I could grow in and not be lost in the sea of talent. And in Portland we’re still close to home. Our whole family is still there, so we like to be able to have a days drive home. 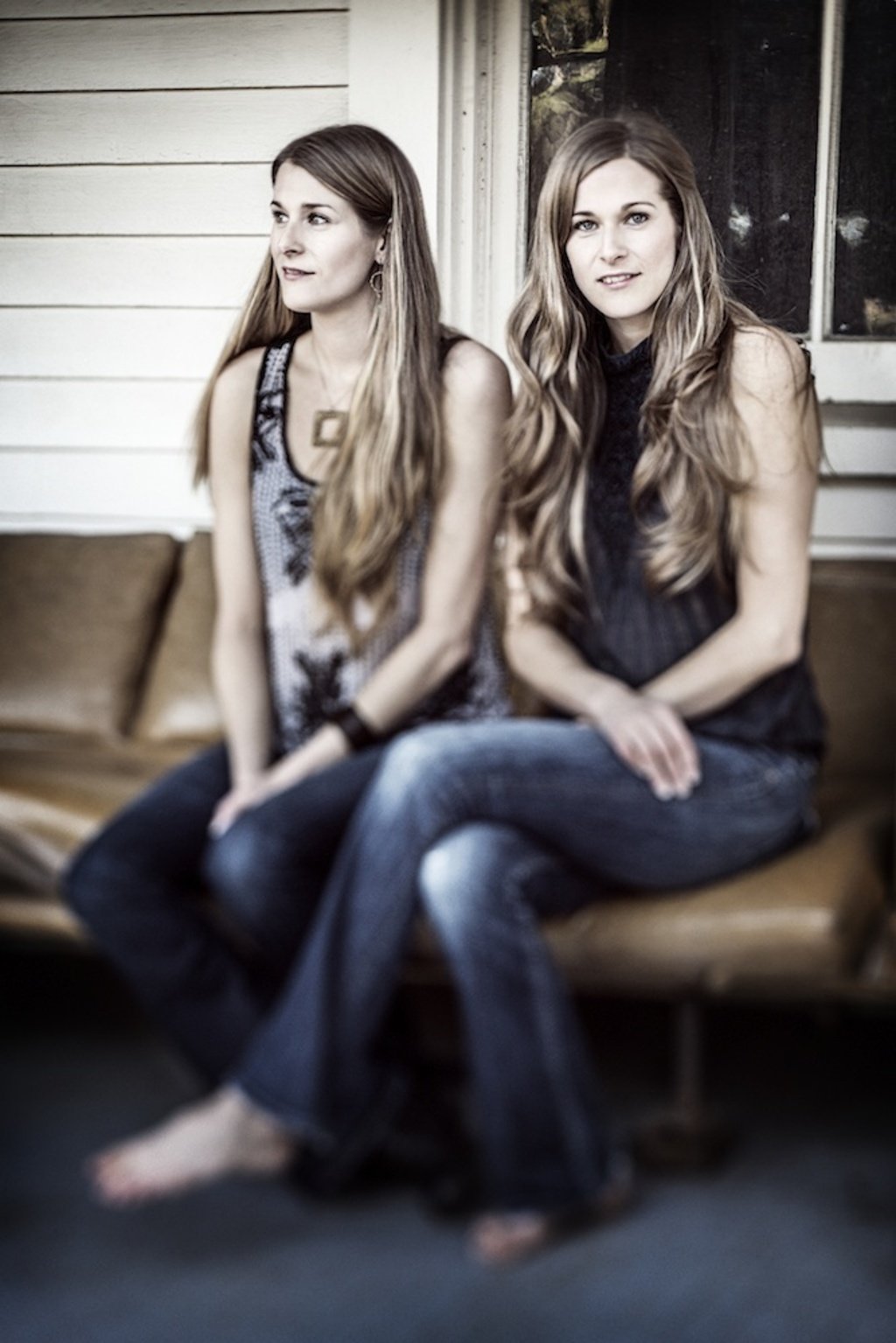 303: What is the music scene like in Portland? Do you feel supported by other musicians in the community?

Katelyn: Yeah, it’s amazing. There’s a huge difference coming from a small place in Idaho where you’re competing for days of the week and a very small amount of venues. It’s a totally different mindset in Portland. There’s so much room for growth and its just makes the whole competition vibe that comes with music different. It’s so supportive. Everybody we’ve met there is always like “you should sit in with us,” or “you could open up this show,” so it’s a really great community and we all help each other out. There’s a lot of admiration and it’s mutual and it feels really good. It’s such a good city.

303:  Let’s talk about the allusive magic Golden Egg. Do you believe in magic?

Katelyn: [giggling] Laurie and I are both really big fans of the power of manifestation and positive thought and trying to see the whole energy from the universe. It’s kind of new-age and cheesy but it really works. So we have lots of tools like that, stones and stuff. But the egg is such a cool way to project that. Laurie especially because she plays on it.

She wishes on it—basically every night—when she’s playing for something she wants in her life and most the time it really does comes true.

And fans have told us, “Ok, this is magical!” That’s how it was made by the performance artist. We haven’t met her face to face yet, just through email, but she just seems like the coolest woman in the world. I think her whole intention behind making things is to make them magical and give them powers. And grant wishes. So we totally tapped into that and the whole energy it came with without ever really meeting her. So Laurie will say that on stage, “make a wish everybody!” and people will tell us later, “I wished for this and it really came true!” It’s really a powerful thing. I love that thing.

It’s totally our thing. It’s also really symbolic for us too. It’s kind of like our visual symbol and it’s also magic and an instrument and everything but it totally makes sense that it’s been implanted in our hands. It’s totally a symbol of our twin-ness because we came from one egg so that’s also an angle that we play.

303: Tell me about the Oregon Country Fair. You guys play there a lot.

Katelyn: The Country Fair. It’s one of the best festivals we’ve ever been apart of. It’s so beautiful and [it’s] on this amazing property. It kind of winds around and it’s not just like normal festivals where vendors just pop up their tents—this property is owned by The Country Fair. It’s always there just for this purpose. The booths are built into the trees and the forest and they’re lavish and beautiful. There are like 1,000 vendors selling food or art and it has 11 stages. It’s really huge. Anywhere from 20-60,000 people come. It’s really  beautiful festival. We’ve done it for five—this will be our sixth—year.

We’re not playing as our band, though. We’re playing as our side project that we play in with Ben Darwish called Morning Ritual. We sing with him and it’s awesome. So we’re going with that outfit this time which will be kind of weird for us. It’s more serious music and we’re really weird. But we’ll still be weird and he’ll deal with it.

303: Would you say you gravitate towards festivals versus headlining a venue?

Katelyn: I like festivals better than just a headlining kind of show. Festivals—it’s the right mindset. All these people come to this place and pay a lot of money at these festivals and the intentions of being in the audience are so much more clear. Even if they are just kind of standing there and not necessarily being loud or whatever, I can feel their energy. I can always feel the energy of a crowd at a festival. It’s in the air.

It’s harder, sometimes, to feel the energy from a crowd in just a theater because people are just sitting there, sometimes being really quiet, and it feels atypical and it’s hard to put on a show when you can’t feel it back. Either people are too loud sitting at a bar drinking beer or it’s too quite and dark. But at festivals we can always give it back.

Now, at this point in our career, we can just tell our people, “hey, we want to go to this festival,” and stay the whole weekend if we can and really get to hang out. And that’s really where its at.

You get to meet so many people and bands, make such great connections and new friends. It’s so much fun. I love festivals.

We just did DelFest in Maryland. That was epic and we met so many new bands. I love it. But it is really tiring. A lot of standing, a lot of walking around. It wears me out.

303: Can you tell me about the album? Did you have a cohesive story that you had in mind when you went to record?

Katelyn: It’s not really cohesive. It’s a collection of songs. It was a different experience recording for sure. We went right outside of Seattle to this awesome studio called Bear Creek Studio. It’s the same producer that just did The Lumineers’ new hit album. So that was really great. He was awesome to work with. Before, we would do our albums in Santa Cruz. It was a different process because we would go down in different chunks of time and we would bring our friends down to record on it. It wasn’t like a cohesive process.

This time we got to do it all at once. We stayed at a band house/studio. It was like band camp with six of us up there. We slept together, ate together, recorded together. Just had like a huge bonding experience. We just became a way better band in that amount of time. I think you can definitely feel that when you listen to it. You can tell it was all made in one place at one time.

It’s incredible to be able to immerse yourself in the music and just be in it the whole entire time instead of going in and out of the mindset.

303: When you guys aren’t performing and making music, what are you doing?

Katelyn: Just chilling. [laughs] Literally. Because we’re always on the go and when we finally get to be in once place … we have awesome roommates. We live with one of our best friends since childhood and just all our friends here in Portland. When we’re home we just make sure to “bro-down.” We have people over, make dinners, barbecue … We always make sure to go to other people’s shows. That’s one thing I always make sure I do when I have time off. And just hang with my friends that I love so much and don’t get to see.