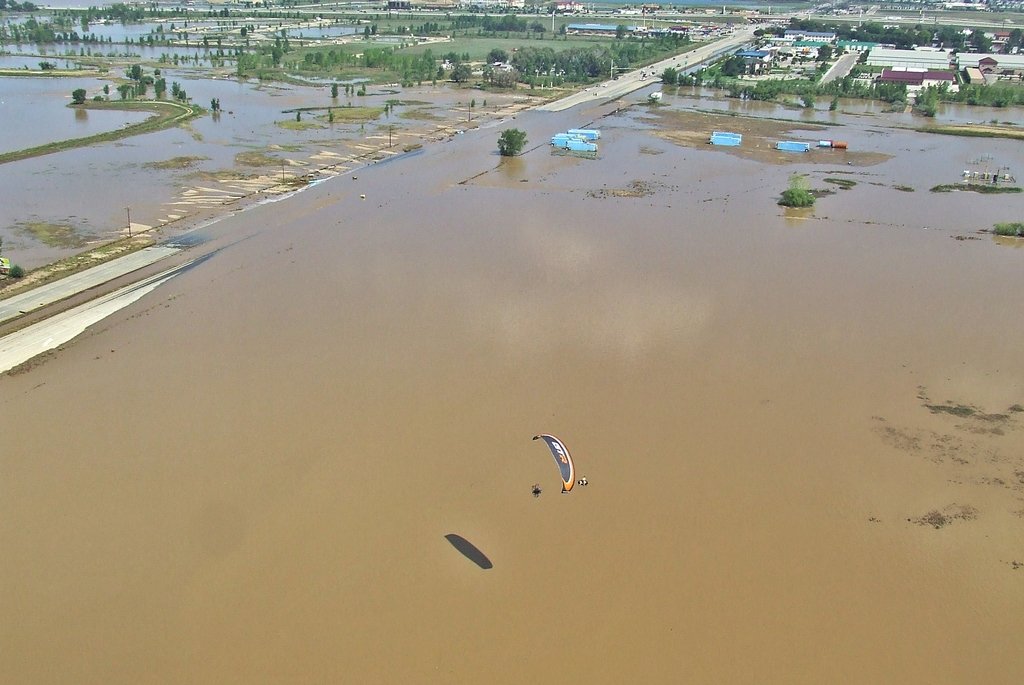 It was just last week that Boulder County became international news when rainfall and flooding overtook miles of homes, schools and businesses. Thousands of people evacuated their homes and many have since returned to find that everything they once had is now gone. If you’ve watched the news, you’ve seen water rushing down roads, tearing apart cities and bridges. But until now, the sight of the true damage of these floods was unknown.

Local pilots Nathan ‘Drifto’ Finneman and Christopher ‘Mooster’ Montes spent all day Sunday and Monday in the sky, capturing what looks like hundreds of new lakes that have formed all over northwest Colorado. Using their experience with flying to give viewers a better idea of the devastation of the floods, the two created a video that has now gone viral.

I sat down with Finneman yesterday to hear a little about his experience flying over the floods. 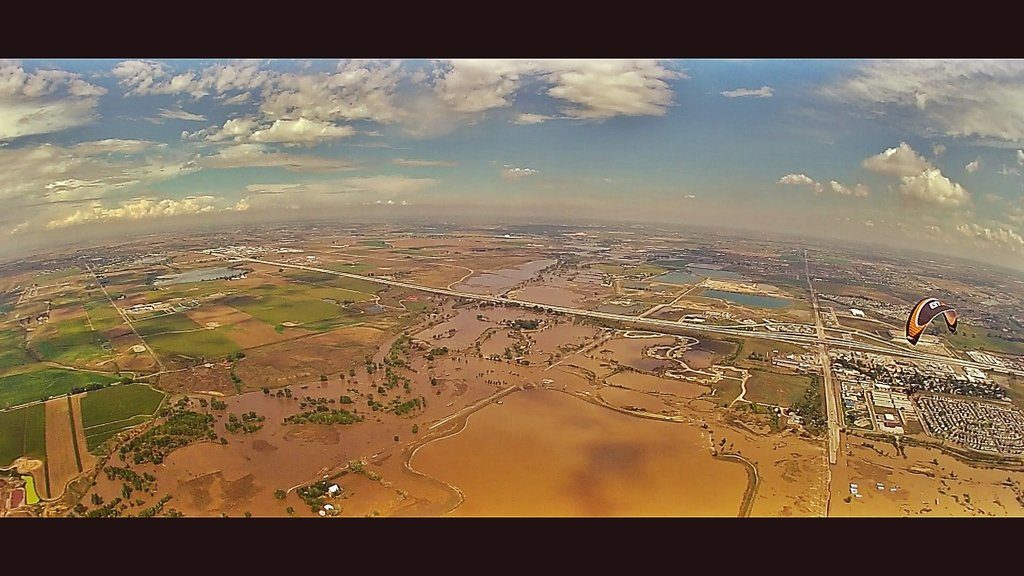 303 Magazine: Why did you want to make this video?

Nathan Finneman: Everything that I saw from the point the flooding began to the time we started flying, I noticed that there’s hardly any aerial footage. I think that kind of drove me nuts because people can only see one focal point. And we have these machines and it’s like, why don’t we use them and give the world a perspective from the air? Once I actually physically got to the flood site, from the air, my mouth was open the whole time. I’ve never seen that much destruction. When I thought about a flood before, I would think of something maybe 200 feet wide – bigger than your average river. But some of these floods were almost a quarter mile wide and that was eye opening because it makes you understand why it takes out whole neighborhoods.

What were you feeling when you were above it all?

NF: My buddy Chris [Montes] and I had constant communication with each other, and as soon as we formed up and started looking at it, I kept asking him, “are you there?” And he was like, “I’ve never seen anything like this.” It really hit us when we dropped down just a few feet off of the ground. Highway 119 was technically closed. It blew me away because you’re going down this road and it’s almost something out of “The Walking Dead” [TV show]. It was so eerie because there’s no people on this massive highway, but there’s all this furniture. That was a big shocking point for me. The other point was when we flew through this one section of the river. All these bridges – these massive bridges – were taken out and on their sides. When I circled around, there were these three cars that were pinned underneath the bridge. And you could see them poking out. That hit me because you ask yourself if those people got out. Or if they didn’t make it. 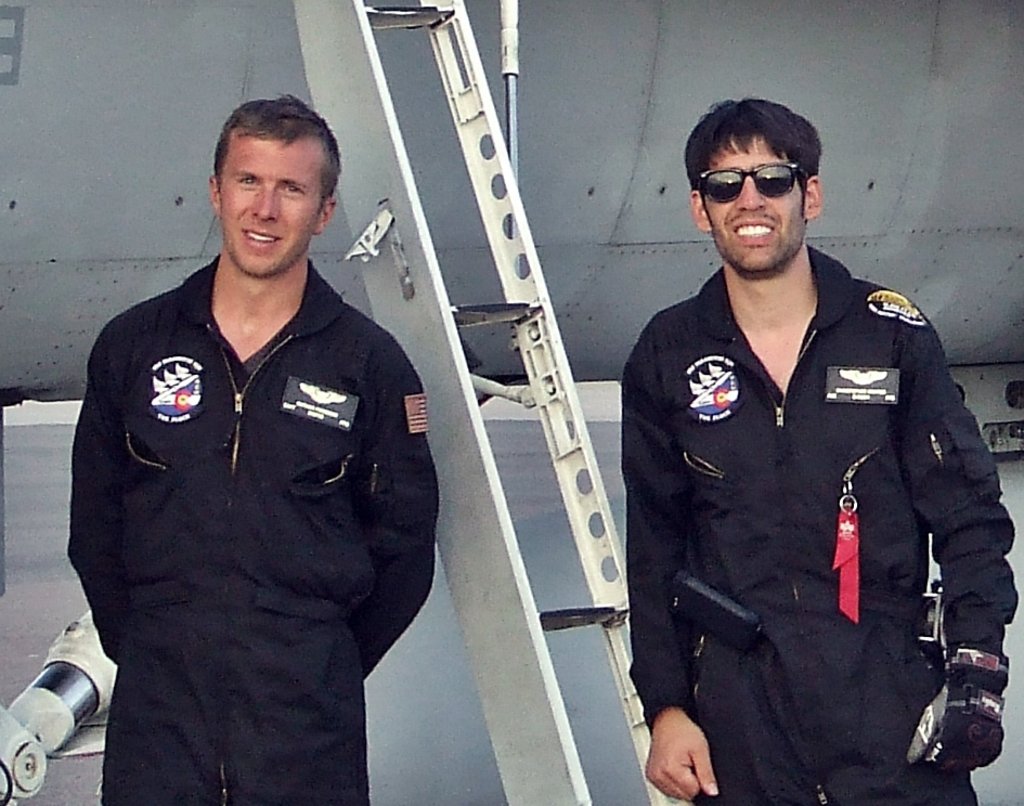 On the news they kept showing stranded animals. Did you see a lot of that?

NF: I saw a lot of cattle. As bad as it sounds, I saw a lot of dead livestock too. I’m bummed because when my camera died, we crossed this one section where these four horses were trying to cross and I don’t know if they made it or not… I’m not a big horse guy, but seeing those horses, I wish I could have helped them.

What are the machines that you used?

NF: They have a lot of names: jetpacks, personal flying machines – but their true name is paramotor or powered paraglider. They can go from 5 mph to over 55 mph and their duration is about four hours depending on tank size and altitude. I’ve been up to about 12,000 feet. The possibilities are just like those of an airplane, but only you can fold it up and put it in your vehicle.

In a few parts of the video, it looks like you’re about to touch the water. Did you ever think you’d crash?

NF: From the point we took off to the point we landed, I had motor issues. I knew I had motor issues, but I didn’t find the severity that bad until I physically got in the flood area. A power motor creates thrusts by spinning a big propeller and you have a throttle just like an airplane. When I was trying to throttle up to pull out of a low hanging tree, which was right by a flood, the motor wouldn’t throttle up. So I kept loosing altitude and I kept yelling on the intercom, “Chris, I think I’m going down.” Right before I was going to hit the water, it turned back on. So then I pulled out of it. I thought that was going to be it, and go figure, we come around and film another segment by this bridge that is totally washed out and it did it to me again. I thought I was going swimming.

Why did you basically risk your life trying to get so close?

NF: …that’s how you get good footage. If you sit up at 500 feet like every other airplane, you see the whole landscape, but people don’t see the cars upside down or a bridge that collapsed. That’s why we wanted to film it and get so low. It was worth it.

What areas did you fly through?

NF: We started east of Longmont, north passed the sugar refinery, and through a state park. We circled around that, and that’s when the storm front moved in and we had to head back. We flew a total of 38 miles and that doesn’t seem like a lot, but when you’re really low and you’re going back and forth filming, it’s a lot.

Are you going to film anywhere else in Boulder County?

NF: We’re going back up this coming weekend and we’re filming Lyons which essentially got totally wiped out and two other places. So we’ll have even more filming to do. And we’ll add some of Tuesdays footage after that. Hopefully the weather holds.

What reactions have you gotten from the film so far?

NF: A lot of the videos I’ve uploaded have people that either love it or they’re just negative about it. From this video, a lot of people are shocked. The biggest eye-opener when people see it is how much damage it caused. It hits home for a lot of people. Probably 70% of the people that commented on it lived in that area, so it hit them hard knowing that this was the sidewalk they walked on a week ago and that’s the park where they played with their dog. And now it’s all gone. 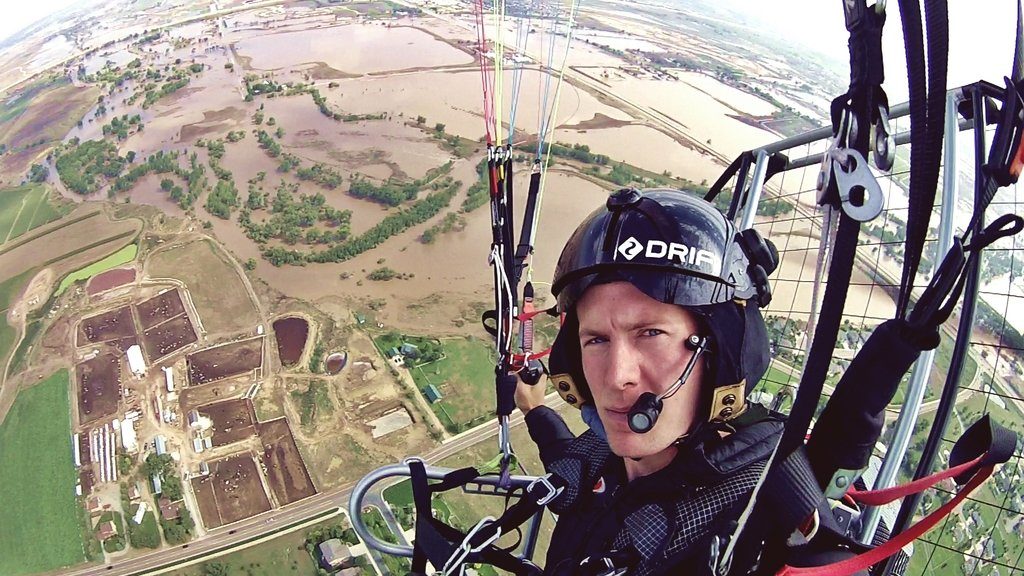 Tell me a little about your background and experience with flying.

NF: I’m currently a cadet in the U.S. Air Force. My overall goal is to become a fighter pilot after my session is up. I’m still in school, so I’m finishing that. I’m a pilot for a camera company called Drift Innovation, which is based out of the U.K. The camera they built has been one of the best cameras I’ve used.

When did you know you wanted to be a pilot?

NF: I’ve always been fascinated with flight since I was six. I built my first glider out of cardboard from when my parents bought a bunch of furniture at age 7. That failed horribly when I ran off the hill. Then I go into hang gliders. I flew off Boulder with hang gliders for six years, then I had a pretty bad crash, so I got out of that. Then I got into ultralights and airplanes, and then somehow paramotors fit into that category.

What does your life look like five years from now?

NF: In five years, I’d love to be a fighter pilot in the U.S. Air Force, and fly F-16s and F-35s. If that for some reason doesn’t go as planned, plan B would be to be a commercial pilot in the Bahamas with a float plan and just island hop all day.

Check out the video, created by Nathan ‘Drifto’ Finneman and Christopher ‘Mooster’ Montes, and stay tuned in to 303 Magazine for the next video from the team that captured the incredible footage of the Colorado floods.