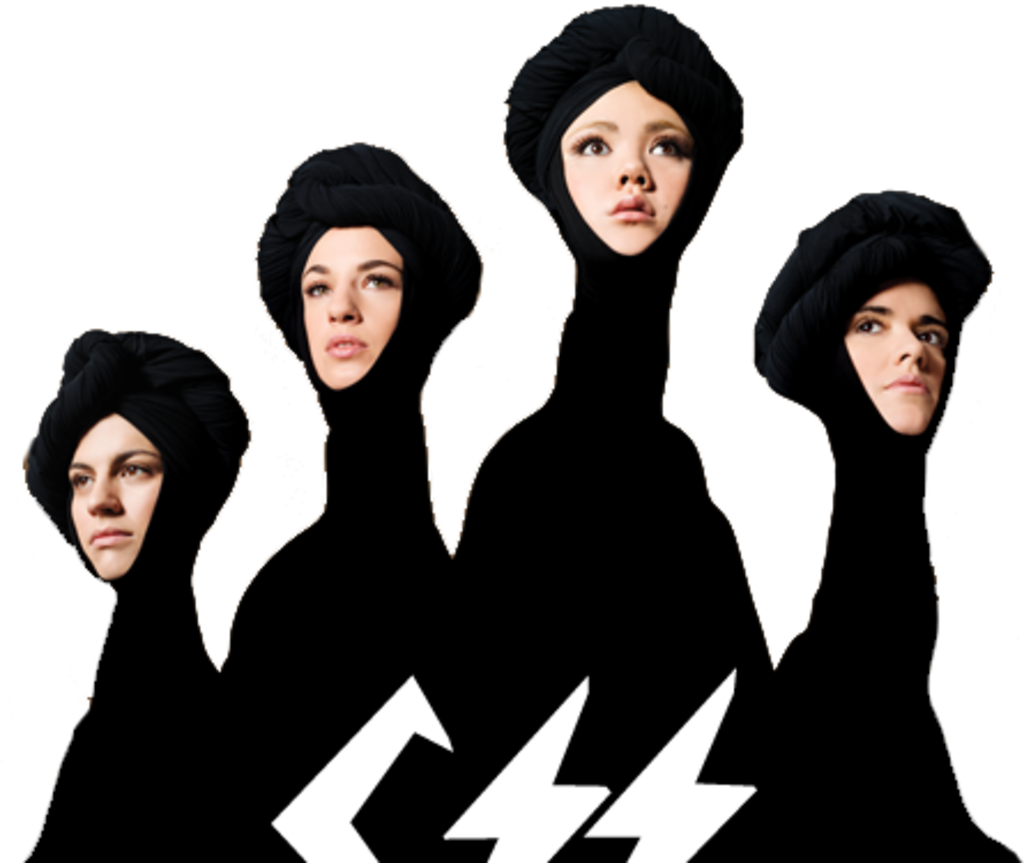 Brain Pickin’: CSS is “Tired of Being Sexy”

Poor girls. I can only imagine just how exhausting it must be to run around with your closest friends, rock out to adoring crowds all over the world, and jump around on stage in leopard print spandex shorts.

Summit Music Hall’s Saturday night CSS show was certainly one to remember. Cute Brazilian chicks, loud music, bellowing bass, and a bright eyed lead singer with the enthusiasm of a head cheerleader and a hair cut like Cousin It’s. She goes by Lovefoxxx and swings around a green microphone, tossing her locks out of her face with the aid of a small electric fan (until one strand got caught in it, at which point she laughed it off, all the while untangling it with the help of a front row audience member and never missed a lyric).

Cansei de Ser Sexy (CSS), which literally translates to “tired of being sexy,” sure knows how to work the crowd. During their song “City Grrrl,” they brought onstage an honorary fan-cameo, a dude from the crowd who proudly sang along to every verse and strutted around with the girls in his cropped-top. Throughout the night, the small but riled-up audience happily sang aloud and bounced about joyously on cue.

These chicks played rock and pop and rapped and screamed and jumped up and down. They flaunted vulgarity in their lyrics, but remained shiny and adorable in their appearance. And they looked good. Guitarist, Ana Rezende, sported a Mariah Carey cut-off t-shirt and singer, Lovefoxxx (Luisa), came out for the encore in a shimmering gold-lined cape. The girls were fun and charismatic with shy smiles, tattoos a-plenty, and a sort of aloof dedication to the fine art of throwing down hard.

303 Magazine had a chance to interview guitarist, Luiza Sá. Check out the interview below to find out about CSS’s new album, their creative process, and why being boo-ed off stage isn’t really so bad.

303: Congrats on releasing Planta! What was it like making this album? Did you have a specific concept for the album?

Luiza: Thank you so much! Making this record was very fun. We didn’t set out to do something very specific in the beginning, but ultimately we decided to do more of an electronic dance album at some point.

303:  What were you listening to at the time you were recording Planta?

Luiza: So many different things, per usual. We listened to some Hunx, Chairlift and Grimes – all of which came out in 2012. We all listen to different things – old and new – all the time. There are so many influences on this record.

303: You guys have known each other for a long time. How do you settle creative disagreements?

Luiza: We never have major disagreements because we respect each other’s point-of-view. Also, with time, songs change to a place where everyone feels good about it.

303: What are some nick names you have for one another?

Luiza: We all call it each other “bi.” Pronounced “bee.”

303: You’ve been booed off stage before. What’s your advice for dealing with harsh critics?

Luiza: The only time we’ve been booed, we were not playing our own show. It was CSS being part of a tribute to this Brazilian musician we don’t like. But, it was a paid gig, and that was amazing for us at the time, so we did it. The whole thing was really funny and we didn’t care. That is not the exact same feeling and experience of being booed on our own show but I guess there will always be people who don’t like your work and that’s totally fine. Also, it’s better to get some reaction – good or bad – than no reaction. SSION used to make uptight people really bothered and agro. It was a thing to watch.

303: After experiencing so much success with your debut album several years ago, were you worried about becoming irrelevant? What decisions did you make to ensure that CSS would have a future making music successfully?

Luiza: We weren’t worried about something like that because we didn’t even expect the first record to do so well. We were along for the ride and just kept doing the things that we wanted to, just like before, but in a new way. I think it’s a little dangerous to find out what makes one successful like there’s a formula, because probably there isn’t one way that’s going to ensure something. But, working hard for your own satisfaction is a good plan because no matter what results, you grew and you are happy with the experience itself.

303: What roles do you all take during the creative process? For example, does one person write lyrics while another works on harmonies?

Luiza: We all wrote different parts on this record. Usually Carol goes for the music part, I tend to be between music and lyrics, and Ana and Lovefoxxx are usually lyrics but there were songs when that wasn’t the case. There were songs that all of us wrote everything in it so there are no rules, really.

303: When did you start making music?

Luiza: CSS was my first band. Same goes for Lovefoxxx. Ana and Carol played in bands before but it’s all around the time CSS began.

Our first show was really fun and unusual. We played at a friend’s vintage furniture store that was going to close down and it was all energy and fun. We were very, very punk and raw. The drums were just a floor tom and a snare, one of the guitars wasn’t even on a amp, it was directly connected to the soundboard and PA. We played the same four songs twice. One of them was Madonna’s “Hollywood” and another one was a mash-up of a Sleater-Kinney and Jennifer Lopez song. I thought we sounded crazy and that no one could even understand what was happening but as soon as the show ended everyone watching was like “this was amazing!”