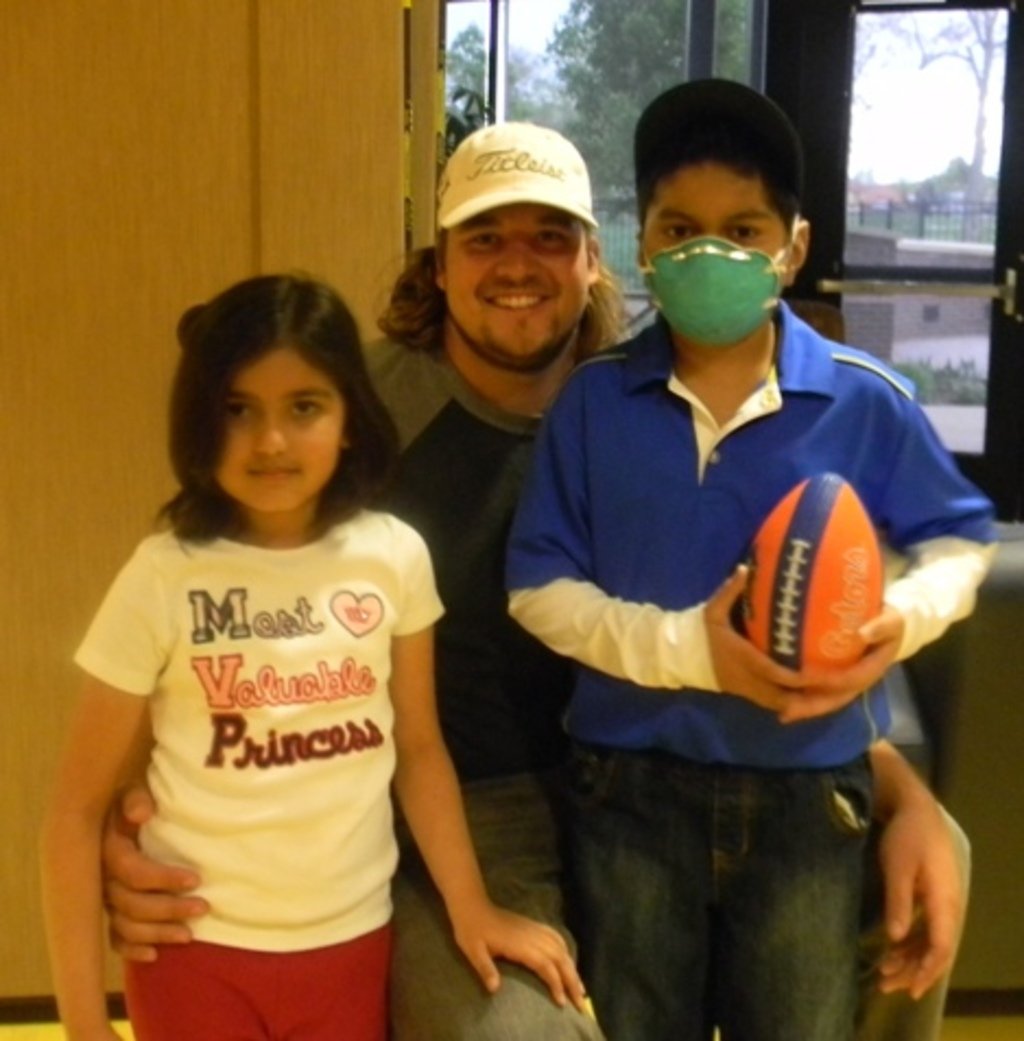 Sports That Inspire: Denver Bronco Gives Back to Kids with Cancer

Sunday night lights flooded the field and the roar of a home crowd echoed beyond the foothills. Between the great expectations of a rejuvenated fanbase and the highly anticipated Denver debut of an accomplished quarterback, tonight, Zane had something to prove. He adjusted his helmet strap and lowered his shoulder, determined to terminate the Steelers defensive line, to protect his leader, and to fight for the win.

Meanwhile, a few states away in his cozy Montana home, Rowan’s ears perked to the sound of fans cheering on his living room television. His laughing blue eyes widened with delight as orange and blue colors flashed across the screen. He clambered his baby limbs and giggled excitedly alongside his family, determined to cheer on the Broncos, to celebrate his childhood, and to fight for his life.

Zane Beadles, 305 lb Broncos O-lineman, hails from the University of Utah where he recieved a degree in Mechanical Engineering. While notions of acquiring an MBA and designing defense weapons have been sidetracked by his successful NFL career, he seeks to achieve successes beyond the  football field by giving back to his Denver community and supporting a cause dear to his heart.

Zane has watched as many close to him suffered from cancer. Several of his grandparents have beaten cancer — one grandmother beat it twice. While playing college in Utah, he met a six-year-old boy suffering from a brain a tumor. His condition was terminal and his dying wish was to be buried in a University of Utah football jersey. Zane and his teammates invited him to join practices and spend time in the locker room. A year later, the boy passed away.

“The one thing that everyone notices right away is that Zane’s heart is truly into it.”

The Broncos drafted Zane in the second round of the 2010 NFL draft. Upon settling in Denver, Zane reflected on his blessings and felt compelled to to help others. He discovered Brent’s Place and found it to be “the perfect fit.” Julie Gart, Development Manager at Brent’s Place, agrees. “The one thing that everyone notices right away is that Zane’s heart is truly into it, ” Gart says.

Zane visits Brent’s Place often to sign autographs, spend time with kids making arts and crafts, and having dinner with the families. For many, this is the children’s first experience meeting a professional athlete. The young boys look up to their football hero, while many of the young girls develop crushes on the handsome Broncos player, including nine-year-old Mara.

“Upon meeting Zane, Mara insisted the he pick her up and refused to leave his side — she remains one of his biggest fans.”

Mara suffers from a condition called Severe Combined Immunodeficiency (SCID). At the age of two, the disease attacked her growth plate. While she continues to suffer from her condition, she brightens up the Brent’s Place kitchen, shouting orders and showing off her big personality. Upon meeting Zane, Mara insisted that he pick her up and refused to leave his side — she remains one of his biggest fans.

Zane’s frequent visits lift the moods of the Brent’s Place children, and they look forward to his presence. On his most recent visit, they presented him with a Broncos wagon that they hand-painted themselves. In addition to his moral support, Zane also began the Cakes for Cancer program. Through this program, Zane donates $250 for every Broncos pancake block up to $10,000. A pancake block is achieved when an O-lineman lays a defensive player flat — like a pancake. (Watch number 11 in the video below at seven seconds.)

Last year, the Broncos offensive line reached the $10,000 goal and celebrated with a pancake breakfast for the families. This year, Zane and his teammates hope to increase corporate sponsorship and raise even more money for Brent’s Place.

Brent’s Place offers families with children suffering from cancer both emotional and financial support. Here’s a look at their contribution by the numbers:

“Zane and the children began a cupcake decorating competition, vying for who could put the most sprinkles on a cupcake.”

Brent’s Place pays the families’ rent, purchases their cleaning supplies, and provides three dinners a week and a breakfast on Friday morning. The children enjoy movie night and game night, alternating between the two every 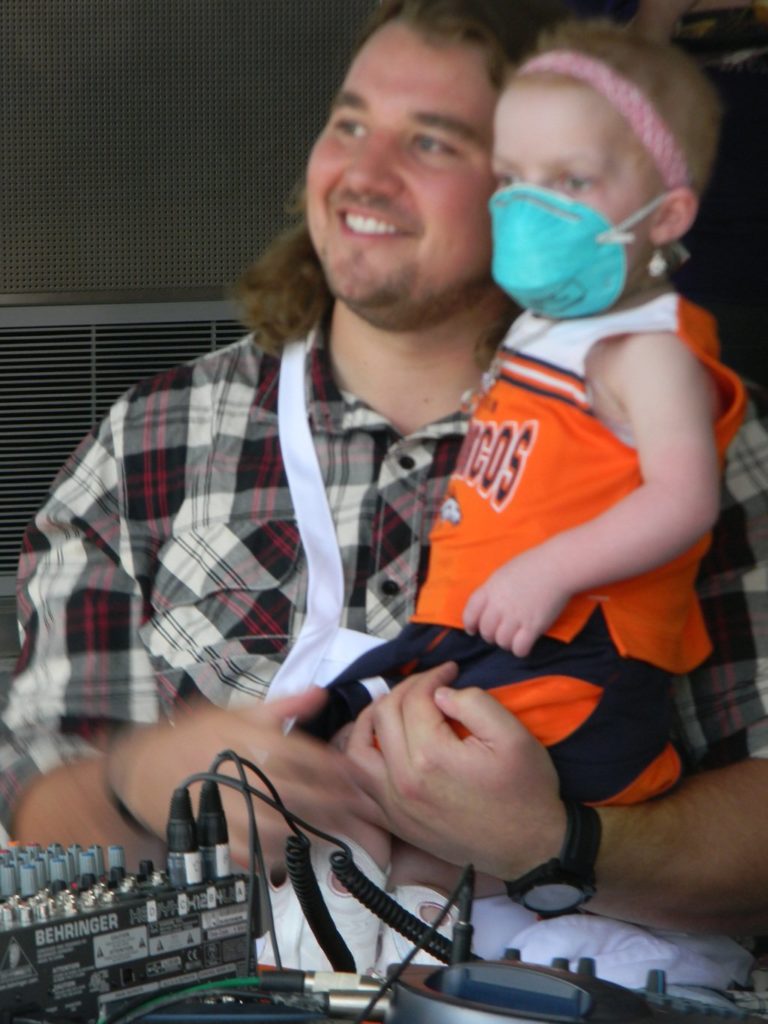 Zane holding nine-year-old Mara — one of his biggest fans.

other Tuesday. On Wednesdays, the kids create arts and crafts. On one of these evenings, Zane and the children began a cupcake decorating competition, vying for who could put the most sprinkles on a cupcake.

The Brent’s Place facility also offers families a community resource library and a brand new cinema room (since most of the children are too sick to actually attend a movie theater). Once a month, those who are well enough, venture out as a group for visits to the zoo and museums.

As the bone marrow unit at Children’s Hospital expands, Brent’s Place too hopes to open its doors to more families. Julie Gart remains excited and optimistic about this possibility, especially with the help of Zane, his teammates, and additional corporate sponsors.

As the sun set over the mountains on Sunday night, the Broncos wore down a tired Steelers defensive line while Peyton Manning’s offensive drives led the home team to victory. Similarly, Rowan cuddled into his bed, comforted by his own successful battle — beating his Leukemia.