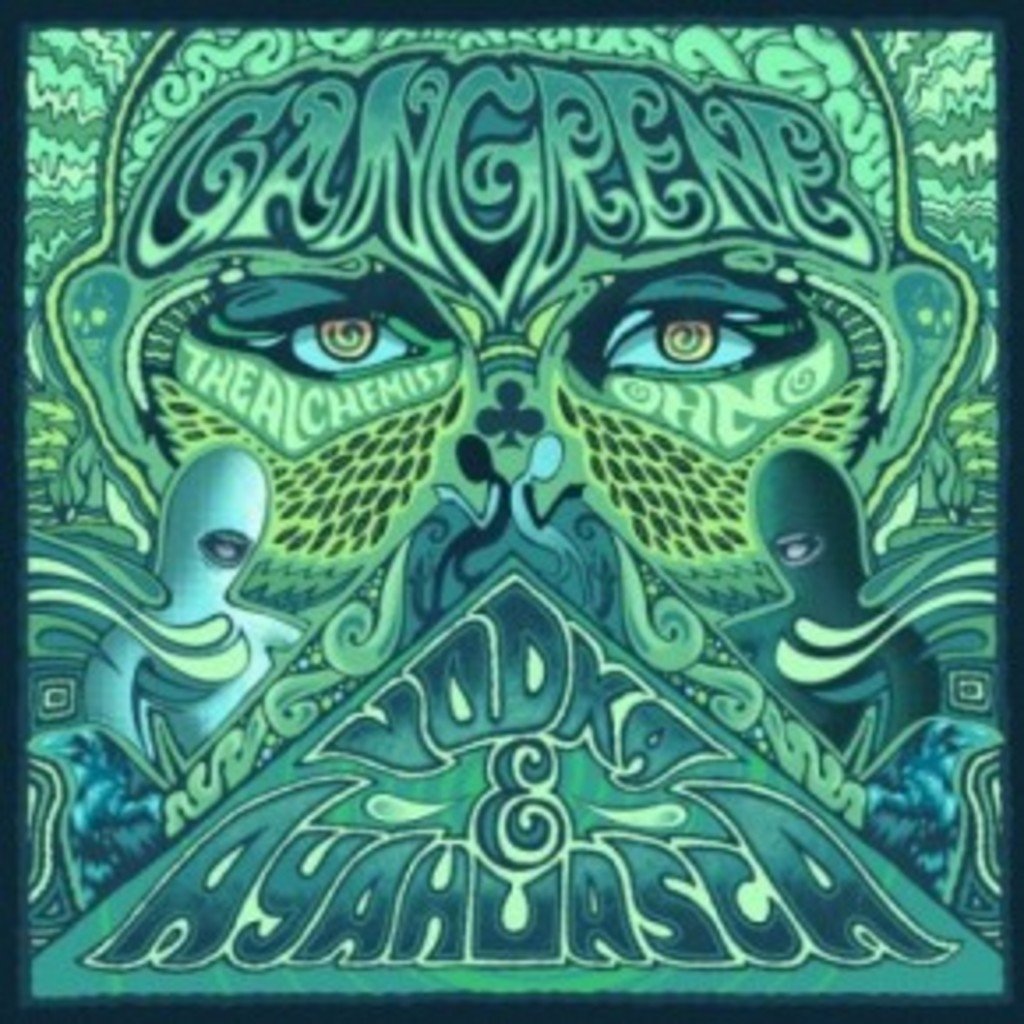 The Alchemist and Oh No have returned to the studio as Gangrene and follow up their previous efforts with Vodka and Ayahuaska.

If you’re not familiar with The Alchemist, I’m not entirely sure how you missed his work with Terror Squad, Pharoahe Monch, Dilated Peoples, Soul Assassins, La Coka Nostra, Slaughterhouse, Raekwon, Eminem, and tons of others in the past fifteen years.

Are you sure you haven’t heard The Alchemist yet?

Oh No, though, has kind of stayed under the radar, working with Peanut Butter Wolf’s Stones Throw Records and making a largely underground name for himself there for about a decade.

…but you’ve probably still heard him with people like Murs.

Before we get into the actual album itself, we have to discuss the title: Vodka and Ayahuaska. I’m certain most of you have a working knowledge of vodka. If you don’t, learn something. Ayahuaska, on the other hand, may be a little more unfamiliar. An Amazonian brew, it is composed partially of DMT (the chemical your brain floods itself with when it has to cope with its own death), is used medicinally and spiritually by native Peruvians for a variety of feelings and ailments.

Now you know why the album cover looks the way it does.

Understanding the title is necessary to understand what I mean when I say that Gangrene worked to make the bulk of the beats (particularly the titular track and “Dark Shades”) give you the layered and intense feeling of vodka and ayahuaska. It’s hip hop’s answer to psychedelic music of the 60s. There’s a simultaneous summoning of Madlib and Syd Barrett all over the almost criminally complex “Gang Groove.”

This isn’t a house party album. This is an album for you, the listener. It’s headphones in dark rooms music. There’s plenty of texture and work on each beat that can be easily overlooked otherwise. Of course it has a few tracks that are more forward (“Flame Throwers” comes to mind), but a large amount of it specifically is not.

Some of you may have noticed that I’ve spent a lot of time on production and haven’t touched on lyrics. There’s a reason: the beats are the ayahuaska, the lyrics are the vodka. If the beats were lesser, the album would get a “meh” out of five from me. Alch and Oh No can release three great albums worth of production in a year, but should have used that entire time to write lyrics for only one of them.

In other words: they need other words. That’s not to say it’s bad, but I couldn’t tell you any even though I just listened to the album before writing this. A simple equation to break it down how I feel about the lyrics would be: Bobby Brackins and Waka Flocka < Oh No and Alchemist < Lupe Fiasco and Emilio Rojas. Dig?

Fingers are crossed for the five-star instrumental album, though (or maybe an off-kilter Pharoahe Monch or MF Doom freestyle over one of the beats).